End of the Immortal 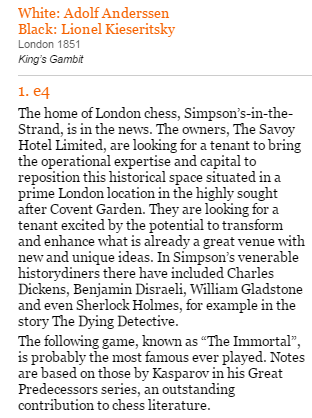 Ray's Times column for 28 February, or the opening two paragraphs anyway. The advertising material's a lot of fun but in fact the subject of today's piece is the Immortal Game, rather than the history of dining at Simpsons-in-the-Strand.

Anyway, this is how Ray wrapped up his largely copied-out column: 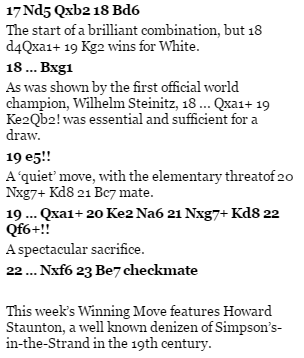 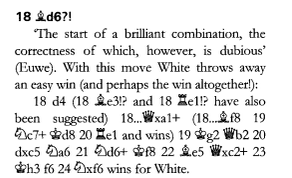 rather than, ah, "based on" Kasparov.

But that's not the subject of today's piece either.

What struck me about Ray's column was that he has White delivering checkmate on move twenty-three. What's noteworthy about that? Only that the source from which he copied has Black resigning three moves earlier. 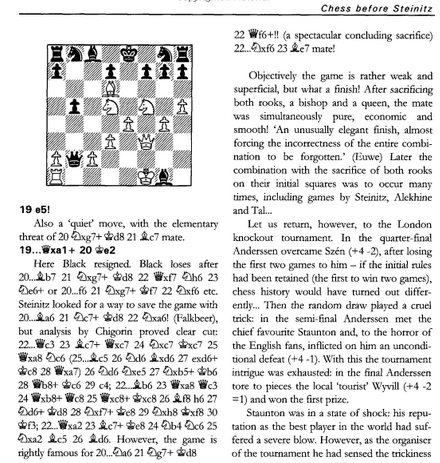 Strange to me, not least because, as far as I remember, I'd never previously been aware that the Immortal didn't continue until mate. Mind you I don't suppose I've played through the Immortal since I was a kid, though one does come across it now and then by chance.


So in the intervening years I've obviously not been paying attention. What's this "Black resigns" all about? Looking it up now, I find Wikipedia's page on the game a bit spotty in its sourcing, but the section on White's twentieth is not too bad

and while I wouldn't mind knowing where Kieseritzky stated he resigned, the fact that the Oxford Companion cites La Régence from 1851 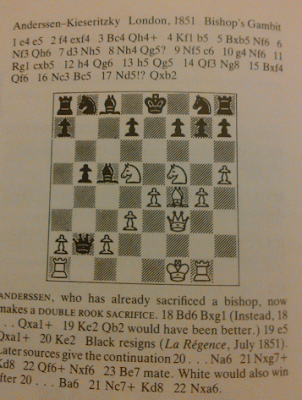 does look like pòwerful evidence in support of the contention that the game did not reach its much-published conclusion.

David Shenk suggests that Kieseritzky resigned either after 20. Ke2 or 20...Na6 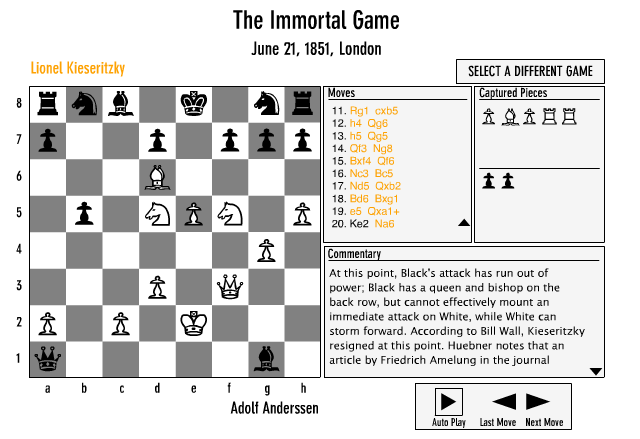 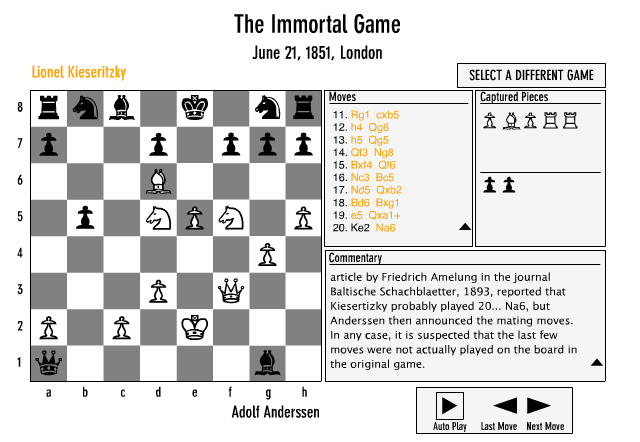 even if we apparently can do no better than "suspected", let alone be sure at which point Kieseritzky (whose name is misspelled on the site) resigned. If, indeed, he did.

Perhaps it will be resolved if a definitive list of the game's early appearances in print can ever be compiled (or maybe not, since errors appear to have been present - see 8862 - almost from the start). In the meantime, don't ask me - I've not been paying attention. It seems there's been a controversy over the end of the Immortal ever since 1851 and yet it's managed to pass me by.

Presumably everybody knew about this except me? Everybody except me - and Ray, who manages to omit the question of the resignation even though it appears in the source which he was copying out.

It would appear to be a paradox that a plagiarist introduces errors in this way, but I guess it makes sense, for the following reasons:

- Plagiarists always deny it, and they know they shouldn't be doing it, so they alter the original text.

- Plagiarism is motivated by laziness, so the plagiarist won't bother reading the original in full, he'll just superficially move words around. After all, if he were to go to the trouble of fully reading and understanding the text, he could rewrite it in his own words--even add some insights of his own.

Anyway, this seems to come up a lot with plagiarists, that they can't leave the source material alone. Apparently the plagiarism process is more difficult than it looks; it's not so easy to move words around without changing the meaning of a text!