We Are Not Amused X

It's been a long time coming: a pretext for another "We Are Not Amused" post - and I'm not referring only to yesterday's Chess Queen reference by Jonathan. The last WANA was just about two years ago, provoked by a faux pas from a prestigious London gallery in its display of Duchampian chess-art. Now it is the Evening Standard - London's free evening paper dished out so liberally on weekdays at the capital's tube stations etc - that has caught the eye.

As free-sheets go, the Standard's reportage is not as superficial as some, and the paper is noteworthy for its well-informed arts reviews on a Thursday. A recent one (26th February) had a headline with a familiar ring to it, and it is that which has prompted today's Chess in Art post, reverting, exceptionally, to its old Saturday slot. 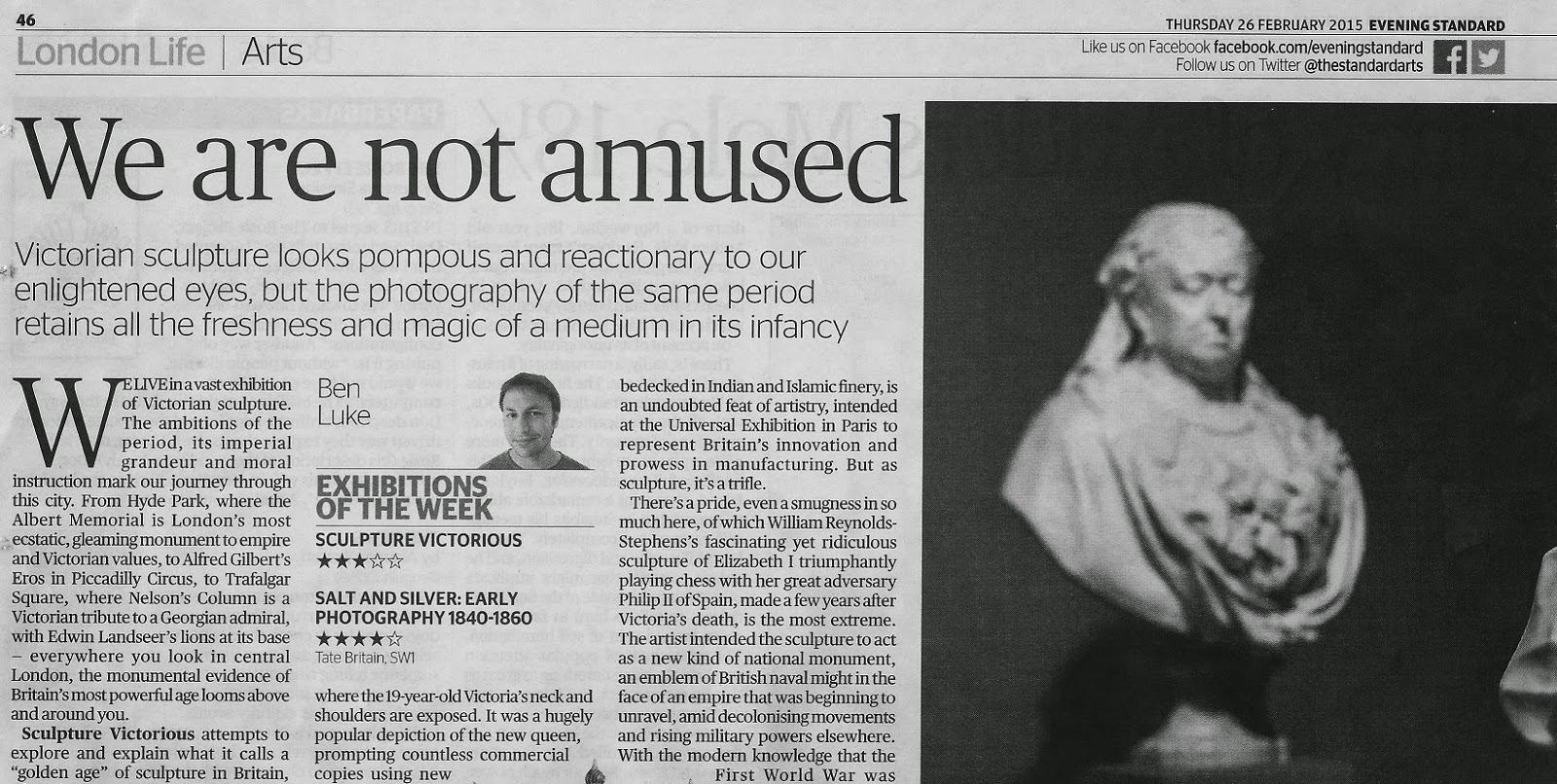 But it's not the large print that really interests us. It's the small stuff in the third column, where commentator Ben Luke - writing about Tate Britain's Sculpture Victorious exhibition - says he found something "fascinating yet ridiculous". He is referring (of course) to our favourite - and outrageous - chess sculpture The Royal Game.

According to the Economist (27 February) it is the show's "crowning glory", and you'll find it - pride of place - in the last room, having caught a tantalizing glimpse of it through a doorway from the first.

"Fascinating yet ridiculous": not a faux pas, more le mot juste...how right Mr Luke is.  OTB goes OTT as the resplendent Queen Elizabeth I, rampant, locks horns with the wily King Phillip II of Spain, couchant (never so dangerous as when cornered). William Reynolds-Stephens concocted this fantasy in the decade after Queen Victoria had died. It glorifies her imperial reign by harking back to the English defeat of the Spanish Armada, the geo-political triumph of that other imperious Queen. Since that Victorian high-water mark of GB's global influence the tide has been ebbing at a rate of knots.

The Royal Game employed the latest Victorian wizardry in an alliance of state-of-the-art technology with manic bespoke handiwork: Arts and Crafts with after-burn. We can marvel at the medium, even if we don't care too much for the message - though we quite like its metaphor. On the board, QE1 is in fact ahead on material and scents victory. Up close you can just see the ghost of a triumphant smile settling on her electroplated lips. Perhaps on this occasion, at least, she has allowed herself to be amused, if only slightly. (Previous analysis of the QE1 v PoS2 position was given here, the first WANA.)

Could Phillip II (1527-1598) actually play? We are told that he courted Ruy Lopez, and "gave the great Spanish chess master...a necklace of a golden chain with a pendant in the form of a rook" (p.225 of Marylyn Yalom's Birth of the Chess Queen - yesterday's "...To Do With Chess" from Jonathan). Moreover QE1 (1533-1603) "was also known to enjoy a spirited game of chess" and "played both chess and draughts with her Latin tutor, Roger Asham, at the beginning of her reign and with others throughout her lifetime" (Yalom p224) - though maybe never, one supposes, with the actual PoS2.

And what about Queen Victoria, who may not even have declared "WANA" (see the denial by her granddaughter here at 6.02): did she play? Apparently so, though she doesn't get a mention in Yalom's book. According to one of Winter's references, here, when Empress, she "generally travelled with chess set and men". Here we see the back of her head as she plays with her adored Prince Albert in the pre-electric gloom, but alas only in the film studio.


And below we find the youthful Queen at it again with two of her heavyweight political advisers, Foreign Secretary Lord Palmerston, and the avuncular Prime Minister, Lord Melbourne.

She may be playing a game with Palmerston, but milords are playing games with her, and she is in danger indeed, and not just political. Palmeston attempted a seduction of one of her chamber-maids (it says here), and on the board the old roué has his piece in a forward position. Mischievously he bids his brother-in-law to keep shtoom about the real intent lurking behind his suggestive advance.

You can't help but notice the approximation of the hand gestures above to Elizabeth's in The Royal Game. Did Reynolds-Stephens indulge in a bit of artistic recycling? And that, with an implied "WANA", is a good place to finish.

Marilyn Yalom Birth of the Chess Queen. Pandora Press, London. 2004.
The Young Victoria clip was uploaded to YouTube by ALCHEssMIST

For an updated version of this, just google *Obama 11-dimensional chess*.

The funny thing is, I don't 11-dimensional chess could really work, not if the pieces move as you would probably imagine them. In 11 dimensions there are too many ways the king could escape any threat.

11-dimensional go would be even more impossible. It would be too hard to enclose any area.

My comment was addressed to the general topic of politicians playing chess, and of chess as a metaphor for what politicians do.

Ok Andrew, thanks for the clarification, and apologies for any misunderstanding.