This series (starting here) has been mining the archive of the Surrey County Association Match Books which go back to the first of Surrey's county matches in 1884. They record, from then on, in more or less detail, the personnel of both sides in the County's matches up to 1967. There has to be a limit to the interest that this material can sustain, and I suspect that we are getting close to it. But before we throw in the towel we may be able to wring one or two more blogs from the Books.

And here is one of them. We noted in the last two episodes (here, and here), when we were investigating the matches against "Croydon", that not all the matches recorded were against county opposition - and you could go further and say that neither were all the matches played even by a full Surrey County team. This episode will continue that theme.

The London Civil Service, Post Office and Municipal Chess League (see note) appears to have been inaugurated in 1904/05 (according the excellent website here) with nine clubs and teams, however it wasn't for almost another twenty years - on 7 April 1923 - that the first Civil Service v Surrey County match took place (as recorded in the Match Books anyway). It was the start of a tradition of almost regular annual matches up to the last one in 1938, finishing as war was looming. That Civil Service chess was strong enough to take on the various Home Counties is shown by the statistics on the website: by 1926 - 20 years after it started - there were 21 chess clubs in the various national Government Ministries, Departments and associated bodies, including some of local government, with 65 teams competing in 5 divisions. This was topped by the post-WW2 expansion, so that by the mid 60s, around 950 chessers (34 clubs, 80 teams) were battling it out in 9 divisions. Alas, the League became but a shadow of this former glory, and moving with the times has adapted to become the streamlined London Public Service Chess League.

Back in the 1920s the 15 year-long series against Surrey started at a canter, with two 50-board matches in 1923 (one victory each, with narrow 3 and 1 point winning margins), before settling into a more or less annual rhythm. Overall, Surrey won 10, the Civil Service 4, although results were typically close to parity - except, that is, for the hefty 34.5 v 15.5 Surrey win of 26 October 1935: as noted by someone in the Match Book, a "Record score for this match."

It is clear from the contest against Surrey in April 1923 (at the Ministry of Health) that there was, from the outset, an issue of boundaries-cum-affiliation as many of the Civil Service players were at the same time members of the SCCA. This included four Surrey players appearing for the Civil Service in the first match, including the latter's board 1 (G.A.Felce, of Brixton CC) and board 2 (E.T.Jesty, probably a direct member, without a club affiliation). 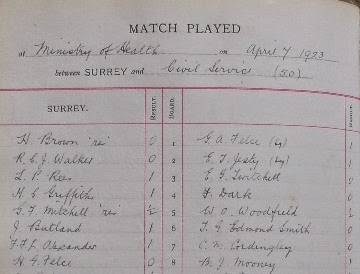 Thus both CS top boards have "(Sy)" alongside - as do (out of picture) boards 11 and 17. Seeing that Surrey had to put in a reserve on board 1, you wonder whether someone had got their wires crossed and Surrey was expecting Felce to play for them. We shouldn't be surprised, of course, to see L.P.Rees in the Surrey team (bd 3) and in on the action - maybe the idea for these contests sprung from his fertile and opportunistic mind: he was an inveterate match-maker, you might say, as we've noted several times in these posts.

The Civil Service was also playing the other Home Counties and conflicts of interest would have arisen in relation to Essex and Kent as well as Surrey. The scale of the problem (handled no doubt with consummate diplomacy, given the métier of the hosts) was laid bare in the record of the match on 24 October 1925 when the Match Book showed the county affiliations of the top Civil Service players. It also, helpfully for us, gives the Club affiliations of all the Surrey team members - though quite why the Book should have departed, on this particular occasion, from its usual lofty disregard for local attachments is not obvious; and it looks as if maybe they are added by another hand. 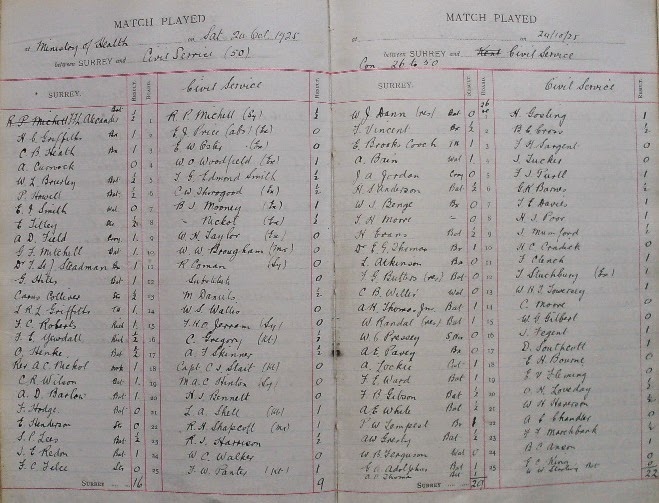 Club and Home County readers looking in might enjoy picking out their forerunners. Streatham and Brixton clubbers will be interested in the following: from Brixton, on the left-hand page, Messrs Griffiths (board 2), Heath (3), Steadman (11); and on the right-hand page, Vincent (1), Benge (7), Thomas (10), Pavey (17) and Tempest (22). From Streatham we find Messrs Titley (8), Colliver (13), Henderson (22), and F.C. Felce (25). Thus S&B combined provided nigh on a quarter of the Surrey squad. In addition, R. Coman on 11 for the Civil Service was a Brixton man - but lost to his Brixton club mate Dr Steadman who, as we saw from Brixton Byways: 10. Howzat, was not inclined to take prisoners.

There are two notable, and surprising, absentees from the line-up in 1925; two players who were eligible for either side, to both of which they otherwise gave sterling support: George Wernick and Bernard Stronach. They weren't S or B men, admittedly, but we'll have a look at them anyway.

They were splendid examples of Edwardian gentlemen who were devoted to public service and, as strong players, gave a lifetime of service to chess. Wernick first...

....he also appeared in Brixton Byways 10 as the Secretary of Battersea CC, and he gets a fulsome appreciation on their website. His obituary in the BCM in 1958 (he died February 15th) is also helpful:


"George Wernick...will long be remembered as a stalwart of the Battersea Club, for which he played from 1897 to 1957. He was in turn President, Secretary, Treasurer, Match Captain, and Champion on twelve occasions. He was Surrey Match Captain, 1913-21 and 1925-28, his work being commemorated by the Wernick Cup, which has been competed for for thirty-five years. He was founder member and first captain of the Clapham Common C.C., 1923, played for the G.P.O.C.C., 1900-56, and was Civil Service Champion, 1923-24."

And there you have a possible explanation of his non-appearance in the team lists in 1925: if he was Surrey Match Captain for the occasion he would quite likely have been holding himself in reserve; and could hardly have played for the opposition, in spite of winning the Civil Service Championship the previous season.

Bernard Stronach, who died in 1962, was another link back to Victorian days having joined the War Office in 1895, subsequently serving in the Ministry of Education for 40 years (information from Obit on Civil Service League website). Like George Wernick, he too had been Civil Service Champion (1926, 31, 33 and 34). His connection to Surrey Chess was through his membership of Thornton Heath CC from 1910, though his BCM obit says he moved to Ealing in 1930 and then joined Athenaeum CC - though that didn't stop him playing for Surrey (his county of birth) as the Match Books show. He served, says the BCM, as an adjudicator for SCCA; and for the CSCA he was Vice-President from 1949 until his death, having also been its Chairman from 1969-72. I haven't, so far, unearthed a photo of Mr. Stronach, but here by way of compensation is one of his efficient games (the circumstances of which will become clearer in a forthcoming post). The notes come from the BCM at the time. [The game may not show correctly via Safari - try Google Chrome instead]

Perhaps we shouldn't make too much of Wernick's and Stronach's absences in 1925, as they were the exception rather than the rule. Thus, they had both played in the November 1923 match (Surrey board 3, and Civil Service board 4, respectively); and Wernick had been board 1 in November 1924, though for the Civil Service that time. Jump ahead to December 1927 and Wernick is now on board 1 for Surrey. Stronach though stayed loyal to the Service, playing on the top boards through the 30s. He beat Golombek in 1931 (Harry was Surrey Champion that year) and G.A.C. Ashcroft in the last match in 1938, both times on board 1.

1938-9 may have been the last year of matches against other counties before the Civil Service Chess Association went into deep freeze during WW2. "It had been a very good year for the Civil Service", said the BCM in April 39, "who have beaten all the county teams they have played. The counties will have to take them more seriously and attempt to play stronger teams....than has been their usual custom." Indeed the Service finished on a high note on December 3rd 1938 by beating Surrey 26 v 24, Stronach winning on top board, as already mentioned, and Middlesex 36.5 v 33.5 (i.e. over 70 boards) in April 39. This made them, said the BCM, holders of the "Star Trophy": though it is unclear (to your blogger) exactly what the remit for that competition was.

The League website shows that the were no formal internal league activities from 1940 to 1946, but they resumed afterwards; as did external matches, if only haltingly. The BCM mentions one or two matches, versus Essex, and the West of England in August 1946, in which Wernick was on board 46, and Stronach was on 73. But there is only one further match against Surrey, and that is recorded in the second volume of the Match Books on 9th January 1954 at the revived National Chess Centre. Surrey won 35.5 v 14.5, but neither Wernick nor Stronach was playing.

As in the series of matches against "Croydon", which we discussed in the last two episodes, all the indications are that the Civil Service contests were conducted in a spirit of friendly rivalry and conviviality: many of the players were well known to each other on and off the board. It is the same these days of course, where, in my neck of the woods for example, we play for a kaleidoscope of clubs and teams, and negotiate a tangled web of allegiances, and nobody comes to blows (not in public anyway). As we will see in some upcoming blogs, such a spirit served chess well, for the most part, in the war years that were to follow at the end of the thirties.

Note: I would assume that the League was run under the auspices of the Civil Service Chess Association. It is possible that the club and membership figures above relate to the CSCA nationally, rather than the London CS, PO & MCL.

Thanks again to the encyclopedic Martin Cath of SCCA, who remembers playing Bernard Stronach in 1960 in a correspondence match, the latter representing the Ministry of Education.