Good Lord, Nigel's on the telly.


And in the Telegraph.

Nigel does not think this is wholly fair. To some extent he's right - it's not hard to pick very large holes in any of these articles - though at the same time I'm not entirely sympathetic.

This is mostly because I am a bad person. However it may also be attributable to Nigel's habit of making his arguments in such a way as to invite an absence of sympathy, the present instance not being an exception.

As you will have gathered, Nigel's case is that men's brains are different to women's, that the sexes are "hardwired" differently and that this is the fundamental reason why men outperform women at chess.

OK. That's a case which he is entitled to make if he thinks the science stands up. (The Professor of Cognitive Neuroimaging here seems to think it doesn't. Nor does Dr Burnett of the Institute of Psychological Medicine and Clinical Neurosciences.) But with a scientific case, though, you have to make it seriously. Not seriously in the sense of po-faced, but seriously in the sense of properly. Because science is serious and the issue under discussion is also serious. So make your case seriously.

Here's how Nigel made his case. There are a few things to say about it. 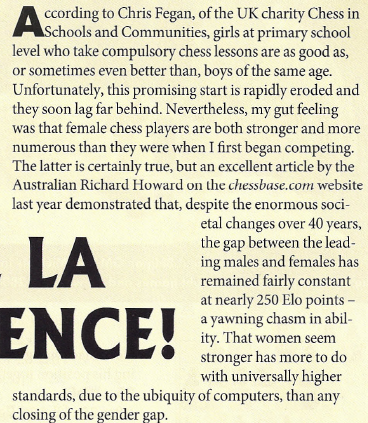 ...an excellent article by the Australian Richard Howard...

It's not life or death, and we all make mistakes, but at the same time it's not exactly evidence of a rigorous approach, is it? Not sufficiently rigorous for anybody to check the piece before going to press, anyway.

THING ONE. If you're attempting to make a serious scientific point, try and get basic details right.

Where, exactly? Could you give us a URL, a title, a date?

THING TWO. If you're attempting to cite scientific evidence, do it so that your readers can look at it themselves and don't have to take your secondhand account of what it says. 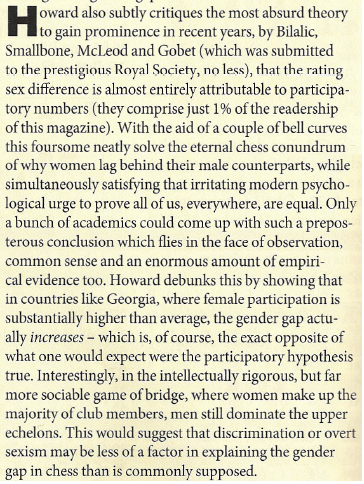 ...absurd theory...only a bunch of academics could come up with such a preposterous conclusion...flies in the face of observation...

Bilalic, Smallbone, McLeod and Gobet, who between them know rather more about the subject than, say, Nigel and I between us, didn't just come out with the first load of old nonsense that came into their heads. They produced rigorous work, referring to and based on previous rigorous research, and then went (I assume) through a process of peer-review before having their work accepted for Proceedings of the Royal Society.

This doesn't make them infallibly right until the end of time. That's not how science works. What it means is that it stands up as research. It is not "preposterous" or "absurd". Writing for scientific journals isn't like writing for New In Chess: you can't just write any old tosh you want and it gets in because of who you are.

I don't have the science (or the maths) to make judgements in the case of Bilalic et al in Proceedings of the Royal Society versus Howard in Personality and Individual Differences. I would be interested to hear from people who do. I am less interested in hearing from people who think you can dispose of research you don't like by referring to "a bunch of academics". That's not science, that's being a jerk.

THING THREE. If you're going to talk about science, have some respect for science and some understanding of what science is. 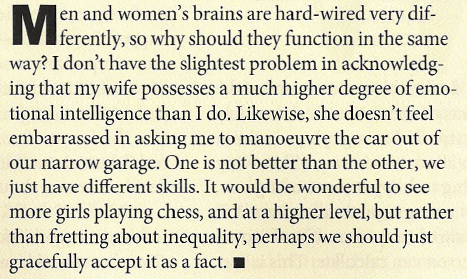 Well, we've seen this one before. In fact quite a lot of people have seen it over the few days and they're not universally impressed.

THING FOUR. If you're going to put yourself forward as a scientist, don't be telling us anecdotes about women drivers. All you do is come over as an ignorant and boorish old sexist.

But we knew that already, didn't we?

I notice that one of the researchers in the study cited disapprovingly by Short is one Kieran Smallbone, who is a pretty decent chess player himself. http://ratings.fide.com/card.phtml?event=406589

Perhaps Nigel's making a bid to be the new Jeremy Clarkson.

I think we can also note that there is only one player, Nigel himself, in the World's top 100, who is also eligible for Seniors events. Can we then conclude that ability to play chess at an elite level reduces with age? I think we can because there's no shortage of Senior players at the not so elite level and it's a generally accepted conclusion that skills can decline with age.

The evidence of the shortage of elite players is much the same for women's chess as for Seniors with the difference that there are fewer women playing than seniors. There are various statistical results which warn against drawing conclusions from small populations as the same result is reasonably achievable by chance. That said, you should also get samples where female players were over-represented amongst the elite.

Jack - Bilalic is/was probably a bit stronger than Kieran and I think Gobet is an IM?

I think that this is a better link to the Australian's study http://www.sciencedirect.com/science/article/pii/S019188691400261X
Has it been shot down yet in academic circles? It would be interesting to know. To be nice to Nigel (why bother?) it would have been hard to seriously cover the issue in the small space allocated to his article. In the end, he's ended up being roasted by Fleet Street, who'd have seen that coming? -theblueweasel-

The top 100 players in Russia are much stronger on average than the top 100 in Norway. Perhaps Nigel Short thinks that Russians' brains are hard-wired differently from Norwegians'. One individual would not disprove that either.

As this example suggests, given unequal participation rates, it is much more likely that we will eventually get a female world champion than that the top 100 women will be better than the top 100 men.

A question then for the statistics gurus. Would you accept that Nigel being the only Senior in the Top 100 is indicative that ability to be a really top player declines with age? How large a sample size as a percentage of the aggregate population do you need to be sure of that?

My understanding of Howard's claim is that he says participation rates don't account for the variation in playing strength by gender. This is where it would perhaps have been helpful not to have abandoned Maths at sixteen.

(I did French instead. At A-Level I got a D. These days I can't speak a coherent sentence. Certainly not in French.)

As yet no mention of the piece below by Fleet Street...
"Mr. Short also said that the site was meant to help promote women's chess. "How many women can play chess at a high level?" Mr. Short said. "There is precisely one, Judit Polgar. If you want to promote women's chess on its own, then you have to do something like this." -the blue weasel-

It is a known statistical result that small populations can give outliers. The very apt comment that the top 100 Russians are better than the top 100 Norwegians is an example of that.

But as the proportion of female players rise as in Georgia, you might expect outliers in the other direction. Thus you hope to find male players less represented in top 100 national lists than implied by the numbers playing. The Howard claim is that didn't happen.


I don't really buy the discrimination argument either. Had the young Georgian player recently accused of cheating in the UAE been female, I doubt that (s)he would have felt it necessary to resort to illegal methods (allegedly) to boost tournament performance as tournament invitations and conditions would be plentiful for a player of that standard if a woman.

In the UK of twenty years ago or more, we had brother and sister combinations where the sister was as strong or stronger than the brother. I'm thinking of the Walkers (Susan Lalic), the Hunts and the Houskas.

He makes three counterarguments: "... a preposterous conclusion which flies in the face of observation, common sense and an enormous amount of empirical evidence too."

Er, the middle one is actually a logical fallacy called, appropriately enough, the "appeal to common sense".

Hmm, "empirical" seems to mean based on observation.

Well then, at least he still has the "enormous amount of empirical evidence". See, there's this one country, Georgia, that completely refutes ....

Okay I give up.

@RdC - Why do you need statistics for that? Why wouldn't you just ask the aging former top players whether they have declined in skill (as opposed to declined only in rating)? If they answer yes to that, the followup is whether they attribute it to aging?

Or we could just appeal to common sense.

For the absence of confusion, the story referred to by the blue weasel above is this, with Nigel weighing in on page 2.

If one were to look at the average abilities of active players at age 20, 30, 40, 50, 60 then this would be a challenge because of selection (the people still playing at 60 are not, on average, the same as the people playing at 20). But this is much less of a concern given that you can track individuals over time.

Jonathan Rogers - you may well be right; I hadn't checked. The only reason I checked Smallbone was that I've played Smallbone and wondered if it was the same person. Turns out it is.

[A couple of comments have failed to make it through moderation due to anonymity. A reminder that you can make anonymous comment on here, but they're just less likely to be passed.]

I think Smallbone is playing in the 4NCL in May so an opportunity to ask about the study. Interestingly the academic collaboration lineage goes back to the well known chess psychologist Adrian De Groot. Gobet was Merim's PhD supervisor and published with De Groot in 1996 (http://ai.ato.ms/MITECS/Entry/gobet.html), although not on this issue.