This is not a folk song

About exactly a year ago the 2014 English Seniors Championship took place in Sunningdale Park, in Berkshire. It didn't go well.

Outsourced to the e2e4 organisation by the English Chess Federation, it attracted only a small entry. One consequence of this was that the generous prize fund advertised 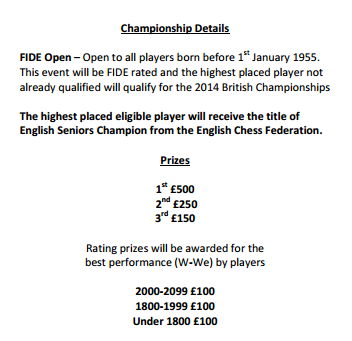 was, when the time came to pay the prizes, considerably reduced.

This led to a considerable controversy. I won't go into it in detail since I imagine the print magazines must have covered it adequately at the time, but basically, complaints reached the ECF from players who believed that they should have received prizes which had not been paid. The organisers however responded that the reduction in prizes had been advertised and that the conditions of entry 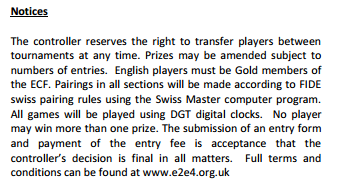 specifically allowed for the amendment of prizes. The Federation's CEO, Phil Ehr, dismissed the complaints.

I don't myself propose to adjudicate on the dispute, here or anywhere else: what interests me here is not the disagreement between the players and the organisers, but the role played by the ECF in what, outsourced or not, was their competition - and regarding which there was evidently some disagreement within the ECF Board itself.

Why do I say so? Because in the middle of the controversy the Commercial Director, Bob Kane, resigned.

He later retracted his resignation, but nevertheless one could detect that not all had been entirely well. I couldn't find much about the matter in the ECF Board minutes so, on November 4 last year, I sent Phil Ehr, by email, a number of questions about the ill-fated tournament and the ECF's role within it.

I waited for a reply. And waited. As it turned out I waited right through November, but when December came I had received no reply, so I sent a reminder on December 4.

Again I waited for a reply. And waited. As it turned out I waited right through December, too. But it passed, Xmas came and went, as did New Year.

So on January 4, when I had waited for two months, I sent another reminder. Three days later, I got a set of replies.

Some, to my mind, were satisfactory enough, others less so, but that's the nature of replies, and better any replies, I thought, than any further waiting. Still, as I wasn't entirely sure that I grasped (or agreed with) exactly what had taken place, on 17 January I sent back another, shorter list of questions.

To date I have not received a reply. This time I've not sent any reminders, as I confess my attention and my interest had started to wander by this stage, as, no doubt, has the reader's.

Now I might give the full list of questions, replies and further questions in a future posting (if I can persuade myself it's really that interesting) but if you've ever been to a folk club, you'll be familiar with the syndrome by which the introduction to the song is rather longer than the song itself, and this posting is already in danger of resembling such a performance. So to cut a too-long story very short, what I'm going to do today is concentrate on one particular issue, which relates to the financial support that the ECF provided to the event.

In my original email of November 4 I asked:

In his reply of January 7, Phil Ehr stated:

That apparently straightforward response is a little bit stranger than it looks, since readers will recall that the eventual prize list appeared to consist of two prizes only, one for £500 and another for £250.

Were prizes awarded that have not been listed? Or was the reply inaccurate in any respect? I don't know, but Phil Ehr ought to.

So my response to Phil Ehr's reply included at its head the following question:


You say "the ECF contributed £1000 towards the prize fund and this amount was paid out" but my understanding is that only £750 was paid out in prizes. Could you clarify this point?

So if anybody else has the opportunity to meet Phi Ehr and fancies having a go, maybe they could put the same question. Assuming he is not under the impression that £500 plus £250 is equal to £1000, how does the sum add up? What is the explanation for his answer?
Posted by ejh at 7:55 am

The event attracted just 12 entries and was hardly advertised (it wasn't listed on the ECF's own calendar, for example).

Therefore, it might also be asked: just what did the ECF get for its £1000 and what steps were taken to ensure it got something?

I have no idea whether they did or not (though I would somehow guess not) but it seems an odd thing for anyone on this blog to assume!

Next weeks Imperial College Congress has no prize money.

This is surely not a good idea.

Only 7 entries so far in the Open. I wonder if they all realise that there is no prize money.

There's nothing wrong with tournaments with no prize money - it won't attract professionals, sure, but it's a perfectly reasonable way for an amateur tournament to be run.

(I played in plenty of tournaments with no prize money when I was chasing my IM title. The prize was that if you scored high enough, you'd get an IM norm.)

I have greatly enjoyed some rapidplay tournaments in Nice, with no prize money. It does make for a more relaxed atmosphere (and probably the locals were less bothered about my winning them, too!)

The cancellation of part of the prize fund didn't become public knowledge until after the British at Aberystwyth.

The June edition of Chess had a round up of results at Easter Congresses, but not this one, even though there were the normal e2e4 events alongside the English Seniors.

I don't really know why there were so few entries. Easter is a traditional Congress period, but perhaps the format of starting on Thursday afternoon and playing five afternoon games seemed wrong for those who had spent some or much of the preceding forty to fifty Easters playing seven rounds. There would have been those who weren't prepared to desert their normal Easter destinations of Bolton, Cardiff, Exmouth or Southend.

This is a little injoke to a previous column (on Keene? This bit I don't remember ) on the lack of investigative reporting of British chess magazines?