Chess in Art Postscript : The Significance of Seeing Ernst.

Chess in Art XIII featured the only sculpture in the series: Max Ernst's "The King playing with his Queen" of 1944. 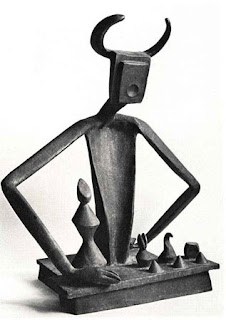 Allusions abound: a hieratic Lord and Protector; a mythic Totem, awesome; a zodiacal Taurus, jealous and possessive; the Minotaur, half-man, half-bull and, as satyrised by Picasso, a bit of old goat........ 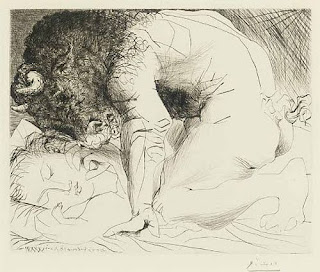 ........... and, as Ernst intended, he portrays himself as the King overprotecting his Queen. As many have commented this one act play celebrates his relationship with fellow surrealist Dorothea Tanning who he married (his fourth time, lucky) in 1946. Ernst is the dramaturge, and he puts himself centre-scene, significantly; his play-actors are pieces in the set of his own creation.

He had ideas about board design as well, and created a "Strategic Value Board" with squares colour-coded accordingly. Unfortunately, decent photographs of the board are almost non-existent, and "hard copies" even more so. Maybe only a couple of them were ever made and have now disappeared from public view (to lose one maybe regarded as a misfortune, to lose two... etc). This photo shows Version 2 of the board, together with the Ernst-designed chess pieces. 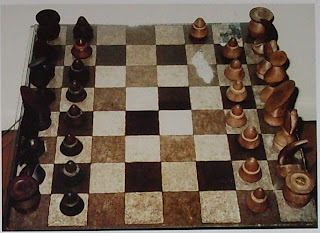 In spite of the poor quality you can see something of the colour modulation of the squares. Along with an artistic sensibility, there is more than a suspicion of a chess mind at work as the strongest blacks and whites are in the centre, and those on the rim dim. The point of 1. h3!? is revealed on h2: a portrait photo of the artist, Max. Headroom obviously only could be found for something passport size. And, yes, they STBUR (see note at end), on a chess table, barely visible, designed by Xenia Cage (wife of John) for "The Imagery of Chess" show of 1944.

Now, as an aside, a morsel of Duchampatrivia: in that famous 1964 photo of himself grinning archly from beyond an Ernst chess set Duchamp also and infamously STBUR - co-incidence number one. But he like-wise, and seemingly intentionally, left the same h2 square empty (albeit with colours reversed): which is coincidence number two. As coincidences go, one may be regarded as good fortune, but two look like carefulness. These deliberate features of the Duchamp photo suggest that it is a nod to 1944, and a homage to his friend Ernst, and this could be the explanation for his knowing look (and that was another minor contribution to Duchamp scholarship (note 2)).

Back to Max: in the January 1945 issue of Chess Review (note 3) there is a black and white photo of the S.V. Board Version 1, framed and displayed as a wall hanging (note 4). Max deconstructed the ensemble and borrowed the frame to pose with Dorothea for this photographic double portrait.

They are using the Ernst set, and the liberated S.V. Board Version 1 which Mrs. Ernst Version 4 has exploited to the max., as you can just see from her intimidating pawn wedge on the strategically invaluable blackest squares. 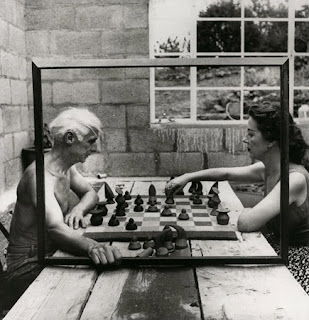 Some have remarked about this photo (note 5) that the couple seem, unwittingly maybe, but wittily for sure, to mimic a medieval scene of flirtatious fore/chess play, of which this is a famous example, moist with innuendo, that makes Max and Dorothea, six centuries later, look chastely old-fashioned... 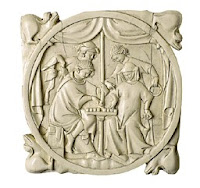 ...inviting further comparison with the famous/scandalous Duchamp/Eve Babitz 1963 game/photo where Marcel affects to be distracted by the chess only.

Ernst's thrifty recycling of artwork into photographic study gives us a serendipitous opportunity to test out whether the frame-within-the-frame hypothesis holds water. As we saw with Delacroix and friends in Chess in Art XV this could be provided by a decrepit arch, unkempt foliage, or anything else pictorially plausible, but here we have a proper one, and this is what happens if you frame with the real thing: 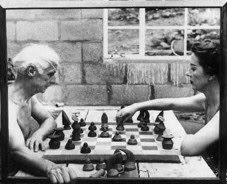 Suppressing the peripheral vision makes a more meaningful image of the chess players at play and it helps us see the significance of Ernst, and Dorothea also of course. So, QEDdeedee, but no surprise to us so handy with digital cropping; we should admire then The Old Masters, who did it by eye, with a brush.

And here is another try at improving the original by Polish artist Renata Wypych: 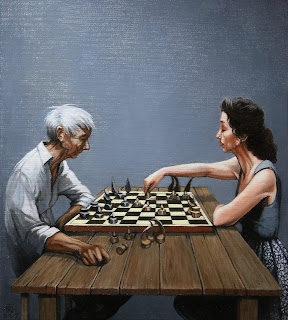 Like a shameless paparazzo she has tweaked the image: plain ground; no frame; and a proper board. Dorothea sits like a ramrod but Max has now slumped, with age perhaps, or more likely in despair at the advancing pawn-roller. But at least he kept his shirt on and stayed calm, focussed and determined; he knows the importance of being earnest.

Dorothea Tanning has outlived Max Ernst by over thirty years, and is now ninety-nine. She is must be one of the last living members of that be-knighted set of artist-cum-chess players in the "The Imagery of Chess" show. I hope she makes it to a hundred and beyond. It is poignant now that her contribution to "The Imagery" was "Endgame". 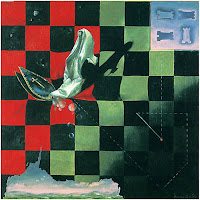 Notes and References
STBUR = Set The Board Up Wrong coined by Mike Fox and Richard James; usually by having a black square bottom right.

Note 1. This is fig. 58 in The Imagery of Chess Revisited by Larry List (ed). (George Braziller, New York, 2005). The “possibly” is his designation. While some of the observations in this post are foreshadowed by comments in List their development and embellishment are not his responsibility.

Note 2. The other two (Duchamp's favourite smoke and a sealed move) were proposed in "We are not amused III". I’m not aware that anyone else has spotted the STUBR and h2 coincidences before – if they have, credit to them where it is due.

Note 6. Commentators who have also squeezed its juices are Bradley Bailey in "Marcel Duchamp - the Art of Chess" (2009), and according to his footnote, Michael Camille "The Medieval Art of Love" (1998).

Well I got the "Max Headroom" joke anyway