What Happened Next XII

On Wednesday we left Ray Keene back at a tournament in Georgia, 1974.

Bohosian had just made his move, 36 Rg3, and pressed his clock (all normal) but then, quite unexpectedly ... 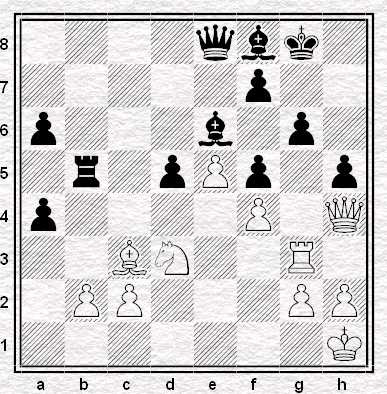 ... he picked up his king and deliberately placed it in the ashtray at the side of the board!! I was desperately short of time and no-one present witnessed the incident. Of course, the arbiters could speak no English and I certainly had no command of Russian, Georgian or Bulgarian. My first reaction was to try and claim the game, but how?? The difficulties of making myself understood seemed insuperable! Instead I restarted my opponent’s clock and pointed to his off-side monarch. He stared at me as if I were a Bulgarian hill bandit and gradually realization dawned over his bovine physiognomy. He picked up his king and put it back on g1(!!) a much superior square of course (no back rank tricks). I wanted to claim again, but what about that damned language barrier? I pushed his king back to h1 and continued playing, though I felt completely off balance. The game was eventually drawn!

The line about "bovine physiognomy" recalls Nigel Short calling Kasparov an "Asiatic despot" and "a hairy ape". Not sure I'm keen on what's going on, in either case.