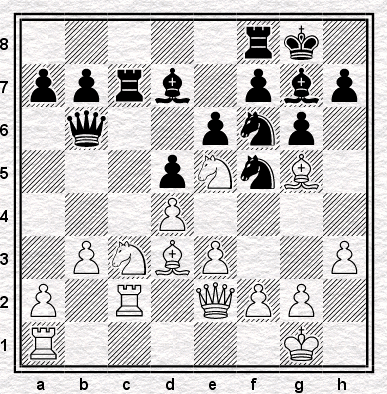 (The game is not given below, being too embarrassingly bad to reproduce in full.)

To my mind this is just about the easiest in the series, but it's one of those which are perhaps more interesting if you ask the question "if it's so easy why didn't the players see it?"

I think it probably is the easiest in the series, since I think I just actually solved it...

Two different ways to win a piece or an exchange, an option to win just a pawn. Yes, definitely the easiest yet!

And the solutions are?

Ah, OK, you're thinking of the same first move and then alternatives, rather than three different first moves! Yes, indeed, as long as I play 19.Bxf6 then it's party time.

As it happens, I considered the capture on both the next two moves, when it doesn't win! But on the nineteenth move, despite all the pieces being obviously set up for a tactic (mind you, they were here too) I didn't. Because, perhaps, 18.Rc2 doesn't seem to do anything to strengthen White tactically and 18...Rfc8 obviously appears to reinforce Black on the c-file - whereas what it actually does in practice is to put a nice rook on c8 for White to take.

Still, my tactical brain must have been at its dullest that morning anyway: if I tell you that the preceding moves were 16...Nd6-f5, 17.Bf4-g5 Rc8-c7, you can see another piece-winning opportunity sailed past unnoticed, and to my mind one that (perhaps unlike the nineteenth move) shouldn't be significantly harder to find OTB than in a puzzle.