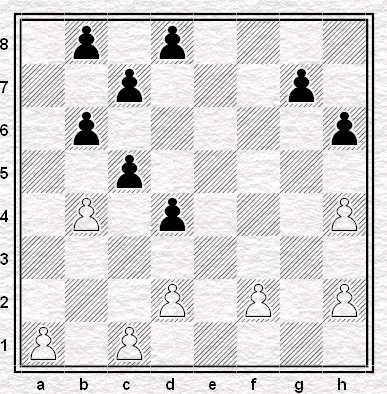 Regular visitors to our blog may recall about a month ago I wrote about a chess game that appeared in an episode of Blake's 7. Subsequently I managed to track down a video clip on YouTube so you can watch it for yourself.

The beginning of the programme sees Avon and Vila deciding not to teleport down to Freedom City with Blake and the others. They claim to be playing chess but since they’re seen studying the rather unlikely position at the head of this post, what they’re actually up to is anybody’s guess.

Later on, the pair decided to pop down after all with a plan to bankrupt the casino by cheating at Roulette then get back to the Liberator before anybody notices they’re missing. Sadly the plan goes awry and Vila gets drunk and is conned into taking on chess playing genius The Klute. If he wins or draws he doubles their winnings. If he loses, though, he gets fried.

Now The Klute may look like a reject munchkin from a Bollywood remake of The Wizard of Oz but he really is a bit tasty at the chess board. There is some good news for Vila however. He has Orac, the universe’s most powerful, and indeed supercilious, computer whispering moves in his ear.

Reconstructing the game was more straightforward than Klute – Frels.

The game ends in perpetual check… 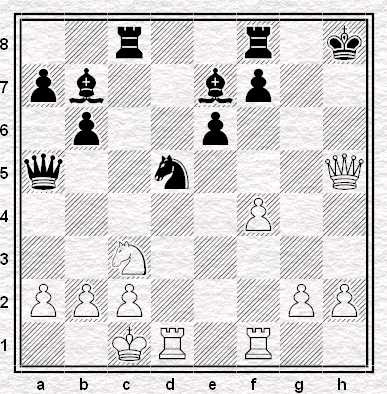 It’s easy to see that to get from here… 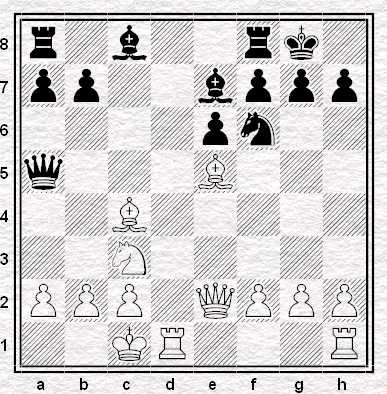 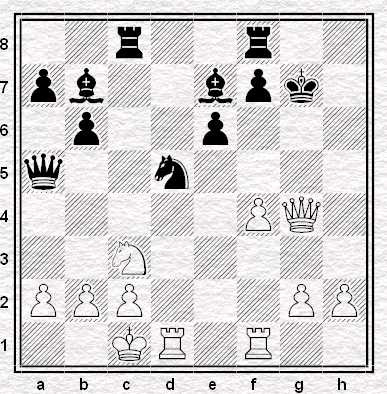 ... White must have played a double bishop sacrifice. I guessed something like,

Incidentally this is a drawing device I happen to know about because I once used it in a similar position during an off-hand game against Justin – the only time I’ve ever played him and not lost.

So if the end is clear, how does the game arrive at the position in the second game? Initially I’d thought the opening must have been a French Defence with 3. … dxe4 but then I realised if that was the case then White’s Knight would have been on f3 and not c3. Next I considered the possibility of a Centre-Counter and although I came up with a sequence of moves that arrives at the correct position in the right number of moves,

it didn’t really make sense. Amongst other things, surely at move 11 The Klute would have preferred to play Knight takes Bishop on d4 rather than exchange Knights on e5.

So I gave up and just punched the position into ChessBase. To my surprise it spat out Nunn-Soos from 1979 which went as follows…

… and the case, as Inspector Clouseau likes to say, is solv-ed.
Posted by Jonathan B at 12:18 am

Wow. Such a long post yet no comments. Afraid I don't have anything useful to say on this one (or any others- Antony, Tom and a thousand others). Still at least I have set the ball rolling. Any useful comments on this anyone?
Andrew

It's all... a little bit before my time! I liked the Nunn-Soos game though.

Could it be that the cross fertilisation of Blake's 7 and Chess is just too much of a speciality interest???

Is there a wikipedia page about it, I wonder...

I remember this Blake's 7 episode and throughly enjoyed your blog entry on it. I didn't bother analysing it at the time, but this is the sort of thing that is great for trivia quizzes. You know, like "what's the game in James Bond movie?"

Slightly more difficult however, is "What's the game in that Columbo episode?". It's hard, because you never get to see the whole of the board. Now there's a challenge for you!

There was a scene where the world champion loses a game in a simul, to something rather trivial (being distracted by Columbo).

I'm talking about the pre-world title match between the challenger and the defending champion, which the challenger wins and drives the world champion crazy, causing the champion to kill the challenger in the garbage masher. Don't do this at home kids :-)

I don't actually have a video of the episode, but they show a part of the game, where there is an exchange in the centre exposing a diagonal followed by a flank exchange resulting in mate within a few moves. It's probably take from a real match now in chessbase.

The challenger claims mate in 4, but there is a way out of it. It's lost for black in any case.

Perhaps someone can run it through chessbase.

Thanks for the prompt!

Deep Roy (the Klute) wasn't a munchkin but, amongst many other performances, played all of the oompah-loompahs in the Charlie and the Chocolate Factory remake starring Johnny Depp.