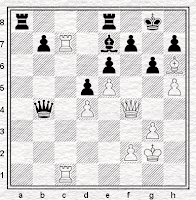 Despite starting with only 14 players for a 16 board match and then soon facing a ½–5½ deficit, Surrey County eventually recorded a stunning 9½–6½ victory on Sunday over Yorkshire, in the Under 175 section of the National Stage of the County Chess Championships. The team thus qualify for the final, where they will face either Essex or Middlesex.

Two players from Streatham & Brixton Chess Club - Robin Haldane and Angus French - played, and both played their part too. Robin slowly ground his opponent down to take the full point, whilst Angus finished off a tense, manoeuvring middlegame against Trevor Braithwaite with a particularly suave pair of sacrifices (see diagram, white to play and win.) Perhaps the location in Leicestershire – a mere 275-mile round trip by car! - put other players off, but this seems rather a shame if so. The venue Syston and District Social Club has been nominated for CAMRA Club of the Year 2007 - whilst its hire and the excellent buffet from hosts Cyril and Julie Johnson cost a mere £3 per player.

So good luck in the final. And also in Surrey County chess news, next Saturday the Open team play Greater Manchester in their semi-final: best of luck to them too.
Posted by Tom Chivers at 11:21 am

Ah - I think I see the finish here.

But dare I ask: did you see the zwischenzug (if that's what it is - I'm a little confused now)?

I didn't play 1 Rb1... White does have to be mindful, though, of the possibility of the Black queen getting onto the b1-h7 diagonal and then back to defend.

Qf6 in the first instance (the q hasn't been "deflected" anywhere, Bf6 in the second

ANGUS:
I admit I hadn't forseen ...g5 but think I probably would have found Qf3 over the board (after a bit of a panic perhaps) had it been played against me in a real game. I think Bxg5 is much prettier though.

I had originally, like Dan, wanted to play Rb1 but then it wouldn't work for the reasons you give.

Angus's nice win here was featured in Chess Today on 10th July 2007 or thereabouts as a puzzle btw.