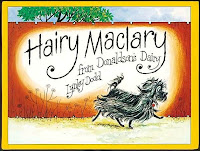 So I’m back. Not from out of space, as per the Gloria Gaynor song, but from deepest Dorset, although as far as being able to connect to the internet was concerned, the effect would have been pretty similar.

Things are pretty different here in London. Looking out of the window I no longer see cows grazing on the far side of the valley, nor, off to one side, do I glimpse the sea knowing it to be just a ten minute walk through fields and country lanes away. I’m guessing most of you, our valued readers, have never actually been to Streatham, so you'll have to trust me when I tell you that is not, in fact, what I'd see if I were to look out of the window right now.


The view is not the only thing that changed for me. After spending most of the week either building sand castles or reading stories to Freya and Thanial, my sister’s children – after what must have been at least a thousand repetitions, I have become intimately acquainted with Hairy Maclary from Donaldson’s Dairy - I suddenly found myself at rather a loose end.

I could have filled the time by watching Nick Pert’s Killer Endgames DVDs, I suppose - last week I spent many of the hours after F & T's bedtime doing exactly that - but for my first night home I decided to take a night off from endgame study and watch Harry Brown on DVD instead. An evening of urban dystopia seemed quite appropriate given the change in my surroundings.


The film, I have to say, was pretty much as expected. Imagine Death Wish transported a few thousand miles east and 35 years into the future, replace Charles Bronson with My Name’s Michael Caine and you’ve got 95% of the film in your head right there.

Not that it’s terrible by any means. It's just that you’ve probably kind-of sort-of seen it before and it's not a little predictable as a result, that’s all. The DVD extras are fun, though, and not just because you get to see the actors and director get asked “what attracted you to this project” and then try to come up with an answer that isn’t “I thought copying an already successful film would give me a decent paycheck”. Buried in the Extended & Delected Scenes section, you see, is an extra bit of dialogue that got cut out of the Frampton-Brown chess scene.


{in the original version, what follows comes immediately after the bit about getting a chess computer}

Harry Brown:
I couldn't play a machine. Len always said 'you play the man not the board'.

He also had this theory that everybody had a personal identification with a particular chess piece. It represented who you are, whether you knew it or not.

I mean, like some people are pawns. One move at a time, one space at a time. Simple. Easy. One-dimensional.

Others are rooks. Straight ahead. Forward. Backward. Life in a straight line. Come at you direct.

And then there are others who are crazy knights. Jumping over people. A little step to the side. Unpredictable.

And they're all there to protect the king who's one of the most powerless pieces on the board. He has no more movement than a pawn.

You see the real power is with the queen. She can go anywhere.

DCI Frampton:
You forgot the bishop. He cuts across the board. Comes at you sideways. Blindsides you.

Harry Brown:
You didn't come here to talk about chess.

Well, you can see why they took it out, can’t you? Just a tad trite, methinks.

Mind you, sometime it's best to leave things behind even if you quite like them. Take where we stayed in Dorset, for example. It was lovely and all that, but, aside from the absence of internet, it would probably have taken at least an hour's drive to get to the nearest chess club.

'I mean, like some people are pawns. One move at a time, one space at a time. Simple. Easy. One-dimensional.'

Not on its first move Mr Clever Dick screenwriter!

I'd thought I'd mention that en passant.

I don't know that it would be too bad if you just used the bit up to "she can go anywhere". Depends how good Caine's supposed to be, but it's the sort of thing that somebody who liked chess but wasn't that good at it might say.