Every Picture Tells A Story: Big Pics Have Little Pics Hanging Up Inside ’Em….

Number 13 in a series of collaborative posts, this one by Martin Smith - the fruits of a theoretical discussion with Richard.

Take a look back at the three versions of the painting of the Hereford Gents playing chess: “Hereford” (which you can see here), “Greenlees” and “Christie’s” (both here). All of them have pictures within the pictures, they are on the walls, and Richard and I have puzzled long and hard over their source and significance.

They appear in identical positions in all three versions: on the left-hand wall of the room, where there are three different pictures; and over the fireplace where the picture stays more or less the same, and this is where we start.

It is recognisably a distant view of Hereford Cathedral across Castle Green, with Nelson’s Column, erected in 1809, prominent in the composition. It is a prospect that would have been much painted by artists aiming to surf the wave of the Nation’s euphoria after Trafalgar.

This is the “Hereford” view, a bit fuzzy though it may be: 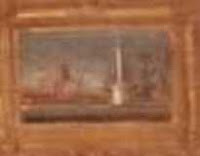 The “Greenlees” version is reasonably clear, even in our distorted scan, and is pretty much the same: 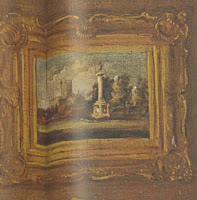 But the Christie’s equivalent is just a splodge of white (you can see it at the back of the full picture via the link above) which, with imagination, could be seen as relating to the pedestal of the column. As with so much in the Christie’s curate’s egg of a painting, some parts, eg the miniature portraits, are good enough to have been painted by Leeming himself. But other parts are not, including the painting on the back wall.

So was there actually a painting of the Cathedral view on the wall of the room that was then copied, in miniature, into the Gents paintings? We got quite excited when we discovered that there was a candidate, sitting in storage in the Hereford Museum and Art Gallery, artist unknown. 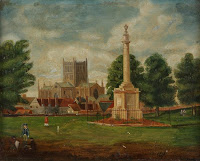 The view is the same, but there are some telling differences from the Leeming miniatures: the figures in left foreground, and the trees, for example. It’s close, but unfortunately not close enough, and anyway not of the standard (clearer when seen in the flesh) to pass muster in a room of this quality.

So the Cathedral view appears definitely in two, and probably all three of the versions, and in each case is a reminder to the viewer that these are Gentlemen of Hereford playing on home turf. But otherwise there are no correlations among the wall paintings. So we’ll take them one by one, and first up is the portrait in “Hereford”.

It is rather indistinct here although, again, the original in the Hereford Art Gallery is clearer. In spite of some efforts, we have not made any progress finding a source for the image. Maybe it’s a family portrait, or maybe, given that we now know that Leeming copied the Magdalen Christ, it has a religious theme. But we will leave it for now and come back to it later in this post. Let's move swiftly on to the figure painting in the Greenlees version.

Mario Praz, the Italian art historian whose book on interior design kicked off our saga, referred to it as a representation of a “Saint Sebastian of the Venetian School” which was a helpful pointer. The blessèd saint has nowadays morphed into a gay icon, and there are compendious websites devoted to him, and his uncommonly slumped pose in Greenlees led us to this: 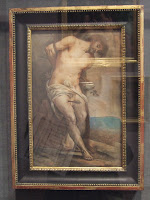 Yes, that’s Lokenhaus church, not in rural Herefordshire but alpine Austria, and the sketch itself is in the National Art Gallery of Hungary. In spite of the close visual fit we haven’t established how Leeming could have been able to copy, even at second hand, the Jan Thomas, and so we explored a suggestion from Dr Enikö Buzási of the Hungarian NAG which pointed us in another direction closer to home: 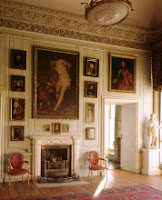 Seghers, a Flemish artist working in the early 1600s, reversed the pose compared with the later Leeming, and put an angel into the action. However, the picture was in England in Leeming’s time, in Lord Egremont’s Petworth House, Sussex, where it has hung ever since.

Moreover, there is an engraving, now owned by the Royal Academy, of the Seghers by Paulus Pontius RA (1603-1658) which reverses the image, putting it the same way round as Leeming’s mini St. Sebastian. So, leaving aside the interfering angel, and focussing on the Saint, the arrows and the tree, the painting and its engraving could have been an accessible source for Leeming’s Greenlees miniature. According to the National Trust, which now manages Petworth, “painters and sculptors [were] free to turn up, with or without their families, whenever they wished to, a source of numerous accounts in the diaries and letters of the period.”

But while possibly it is the source for the Greenlees St. Sebastian, looking at the closer correspondence with the Jan Thomas we’d still feel more comfortable if we could establish a link, even at several removes, between his painting and Greenlees’ mini-version by Leeming.

Now we come to the picture on the left hand wall of Christie’s. We are looking at it last, but certainly not least.

We had noticed this image back in September last year at the Christie’s auction but without understanding what we were looking at. Only in April this year did we realise it was a mini-version of Leeming's copy of Christ Carrying His Cross for Hereford Cathedral which we talked about in this blog. 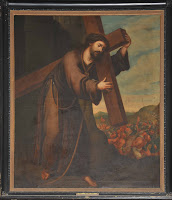 [© Dean and Chapter of Hereford Cathedral]

The striking similarity made us think again about what Leeming was up to with the pictures on the walls. We had assumed that he was making these mini-pictures to personalise each version of the Gents appropriate to their dedicatee, or whoever commissioned them, perhaps copying an item from their private collection. But the Christie’s Christ image suggested otherwise, that perhaps Leeming was copying his own work. Of course, given what we have said above about the unevenness of the Christie's version, the Christ mini-copy may not itself be by Leeming’s own hand, but possibly by a lesser talent under his direction. But nonetheless, the source appears to be Leeming's copy of the Magdalen College original.

If this is right, why then was Leeming putting copies of his own work into the Gents? We suggest that he was taking the opportunity afforded by these paintings to advertise his skills as a copyist. The mini-pictures were an ingenious, and opportune, prospectus for his work. Moreover, by referring to prestigious old-master works, he gave his chess paintings, and through them his patrons, an additional caché of connoisseurship, to everyone’s advantage.

If this is so then the Greenlees version with its mini St. Sebastian, which was shown in the Royal Academy Summer Exhibition of 1818 – then, as now, a popular place to show-case your talents in the competitive London art scene – may hint at the sometime existence of a real-size copy by Leeming of an old-master original.

Well, if there was, and it still is around, we haven’t found it yet. But his obituary refers to Thomas copying yet another, and these days rather well-known, old-master work, and that is highly suggestive. He copied, towards the end of his life, Raphael’s School of Athens, perhaps not the original itself, which is huge and in Rome, but probably one of two smaller copies already in London. This, the better known of the two, may have been the one. 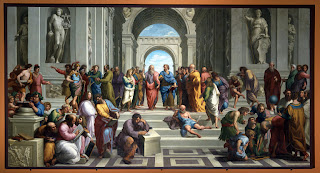 Leeming's reproduction was unsold at the time of his death, which was only four years after the 1818 RA show. As with the Magdalen Altarpiece, it is a copy of a high-end work, suggesting he may have done others, with the Seghers/Paulus Pontius, or Jan Thomas, St.Sebastian as a candidate.

Continuing our train of thought and looking now for a source for the portrait on the wall in the “Hereford”, well, Leeming had painted many portraits of course, so he would have had plentiful raw material at hand. But it opens the intriguing possibility that it may be a copy of a portrait of a high-status subject by another artist, or as we mentioned above, of a religious figure, another Saint for example. Such pious imagery would have had resonance for the Bodenhams of Rotherwas Hall, where we think the Gents were playing chess. They were a long standing Catholic family, and may even have commissioned direct copies (by Leeming, or others) of the religious works upon which the mini-copies were themselves based.

As for the landscape view of Hereford Cathedral: admittedly we have not seen any references to any other landscapes by Leeming – apart from a small local scene in the Hereford Art Gallery’s collection – but the installation of Nelson’s Column on Castle Green was a major, and even locally controversial, event perfect for this market-savvy artist to exploit.

Leeming, we suggest, was taking the opportunity provided by the Gents to set out his stall as a skilled miniaturist, accomplished copyist (as his obituary emphasises) and perhaps even competent landscape painter. It is a speculative theory, with several levels of conjecture, built on a narrow foundation of evidence, but not, you might say, completely off the wall. We are now patiently waiting for the missing pictures to show themselves and provide the buttresses to hold it up.

This copying malarkey. As it's pre-photography, how would you go about it? Presumably they weren't going to let you sit in front of the original with your paints and easels, so what would you do - make loads of sketches, and rent a studio somewhere near the original so you could make a lot of visits to check you were getting it right?

Before photography, yes, but not before the camera. Artists of the time had the camera obscura, and its more sophisticated successor, the camera lucida. With this tool they could project an image of a landscape or portrait onto a sheet of paper and trace the outline. I can't think of a reason why they couldn't also have used it for copying pictures, though there would still be a lot of work to do getting the colours right etc.

Yes, it was the colours as much as anything that I was thinking of. You can make as many sketches as you want, but I don't see that you can get the colours right without making a lot of visits while you'e working.

Or maybe not, but I'd like to know why not.