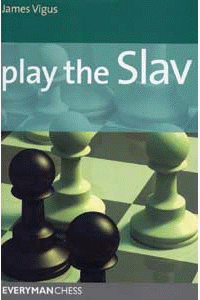 The diagram below is taken from James Vigus' Play the Slav, Everyman, 2008, page 177. The position depicted arises after the following sequence: 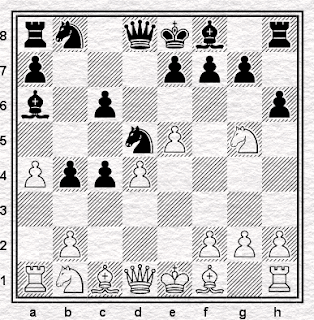 But sort of not. Let's have a look, for instance, at page 119 of James Vigus' book Play the Slav (Everyman, 2008) in which the following sequence is investigated:

bringing us to the following diagram... 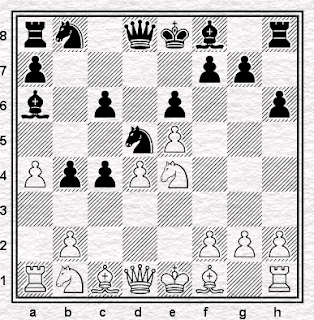 Three game references are given.


[Number one in an occasional series]
Posted by ejh at 7:55 am

A database search shows the first position to be uncommon and Ne4 would have been untested. But it just leads back into a much better known line after .. e6 as pointed out. Something of a failure by the author then either to understand the position well enough to spot the transposition or to use a database tree to check.

It was a problem for authors in the pre-computer era as well. The otherwise excellent Batsford by Keene and Botterill in the early seventies suffered from this as well. In the chapter on the Austrian, the sequence 1 e4 d6 2 d4 Nf6 3 Nc3 g6 4 f4 Bg7 5 Bc4 is considered. In the chapter on Bc4 lines, the line 1 e4 d6 2 d4 Nf6 3 Nc3 g6 4 Bc4 Bg7 5 f4 is discussed. There's no cross reference and different ideas are suggested depending on the move order. Presumably as a joint work, each author wrote one of the chapters. One of the lines suggested is ... d5. This chapter was presumably by Keene himself as he had played the variation against Ljubojevic.

Just for information, as well as the three game references that are given, we're also informed that Ivan Sokolov has played the line - and that his preferred move, 11.Qg4, has a "formidable practical score". None of the three specific references are to Sokolov's games, so there must be at least one more.

Two of the three games continue 11.Nbd2, as does Vigus' main line. But in both instances Black plays not 11...c3, as suggested on page 177, but 11...Nf4. To which Vigus attaches an exclamation mark.

I liked the book - if I hadn't, I doubt I'd have followed it closely enough to spot the error - but it's an odd one to miss, because the structure involved seems to me quite distinctive.

The second position has been reached around 50 times, so Vigus would have had plenty of material to work with and choose from. Only three moves have been tried with one of them, Qf3, a minority and unsuccessful try. The two other moves being Qg4 and Nbd2.
After Nbd2, both c3 and Nf4 have been tried.

I'm not sure what we should expect from chess authors these days. A mere catalogue of supposed main lines isn't enough, because we can get that from the databases. Recommendations of moves can become obsolete and the alternative practical choices by players at least as strong as the author can be illuminating. Perhaps the author's contribution should be to highlight the main positional and tactical ideas without being dogmatic about the best move.