We in Streatham and Brixton Chess Cub were delighted to hear, on or around October 3rd, that the unstinting and unassuming Trevor Brugger, the Secretary of next door neighbours Wimbledon CC,... 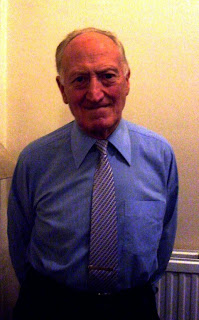 ...was to be awarded the English Chess Federation President's Award 2013. We found out from the agenda papers for the ECF meeting on 13th October, as you can read here.

We were delighted because S&BCC are frequent visitors to Wimbledon (and vice versa) for local derbies in the Surrey League, and also because some of us play for Wimbledon in the Thames Valley League (in which S&B itself doesn't field a team). Thus many of us have known Trevor for as long as we can remember, and are admiring of his service to Club and County over 40-odd years.


Yes, we were delighted to hear the news. And so was Trevor when we emailed our congratulations. Not only was he delighted, he was surprised as well: no-one at the ECF had yet told him, nor invited him to attend an award presentation. In fact, as of yesterday, he still hasn't been told officially that he had been honoured thus - but then it's early days. Not, we hasten to add, that it is Trevor who is raising an eyebrow at the radio silence, he is too nice a chap for that, and anyway the new President must have rather a lot on his plate right now. Congrats also to Mike Basman who got the award as well.

So, the purpose of this post is not to have a friendly dig at the ECF, nor to take the shine off Trevor's award. No, we are here to celebrate Trevor himself, and to offer S&BCC's own appreciation of his fine record of service. The notes below are based on an email or two and a chat with Trevor at Wimbledon CC last week - and thanks to John Wilcox the Club's President for helping out. We'll be adding some embellishments to the excellent citation given in the ECF's papers mentioned above - which originated from John and Wimbledon CC's internal-webmeister Paul Barasi when making their nomination. There are a few surprises in store below.

Yes, 40 plus years as Secretary since 1968, although Trevor had joined the Club almost twenty years earlier when it re-opened in 1949 after the war. He was then only 14 and his mum told him he should go along after seeing an announcement in the local paper. He had been taught the basics by his dad, who was in the Inland Revenue, and his brother Derek then encouraged him; Trevor triumphed as school champion at Balham Grammar enthused by two masters who ran the chess club of 15 aspiring pupils.

Balham Grammar (since demolished, a petrol station now graces the site) was but a stone's throw from the two addresses we have for H.E. Bird less than 50-odd years earlier - as we recounted here. Perhaps we may indulge in a couple more snippets of (non-chess) local history attaching to this gateway to the south. Just up the road was (and still is) the art-deco edifice of Du Cane Court on which, local legend has it, Hitler had his eye as a residence for officers of the Third Reich if he had ever invaded. After all - the story goes - why else did the Luftwaffe spare it a direct hit, unlike Balham station a few hundred yards further, where 68 people were killed on 14 October 1940.

But back to Trevor who, at Wimbledon CC in his early years, rubbed shoulders with such as Leslie Beaumont (of the Beaumont dynasty, Surrey chess aristocracy to be sure, going back to Victorian times when Captain Alexander Beaumont might have enjoyed a snifter with H.E.B.); Eugene Colman (Trevor is one of the few surviving witnesses of the inventor of 8...Rb8 in the Two Knights, which is not the Wimbledon Variation); and the chap who learnt chess from Sultan Khan, that is to say the Pakistani A. Kitchlew (father of the mercurial Andrew Horton-Kitchlew); and most remarkable of all Harry Lauder. I almost fell off my chair on hearing that the Scottish musical hall entertainer, much-fêted in his day, once trod the boards, as it were, at Wimbledon Chess Club. But then, thinking about it, the stirring "Keep Right On To The End Of The Road" could well have stiffened the resolve of any doughty fighter in a long endgame. Down at the Club, "Harry" was, alas, but the affectionate nickname for a certain J.J. Lauder. The Surrey County Chess Association's Lauder Trophy commemorates him to this day: J.J. that is.

So 1968 was the year Trevor took over, just as the line of the chessing Beaumonts petered out. But membership was already in the fifties and, with the Fischer explosion of the 1970s, it was about to go through the roof, there not being room for everyone in the Club's playing room; by then St. Margaret's Church Hall, as I think Trevor said it was. This was one of a succession of Club venues, which included the Prince of Wales in Hartfield Road until, that is, a new landlord, looking at the bottom line, asked them to take their sets and their moderation elsewhere. St. Margaret's distinguishing feature was the inefficiency of its two ancient gas fires. In fact the chill was Wimbledon's secret weapon (though in truth WCC were not the only ones). The home side wore extra layers, but unwary visitors had no defence in the refrigerated vastness of the hall and one hapless opponent keeled over at the board (though perhaps he just had the worst of it in his game). Complaints ensued, warm words belatedly dispensed, and a new venue found. Happily, the visitor made a full recovery.

Trevor was himself handy enough with the pieces, and it is surprising to learn that his opening of choice was 1.b4, perhaps as a nod to the long-established Polish community in Balham. He also revealed that he took many a dip in the Cambridge Springs. About 160 (in ECF old money) at his peak, he was not to be underestimated as a sub for the London League First team inveigling one notable chess historian and expert in Victorian chessers to overreach himself with a "spectacular but unsound knight sacrifice". Trevor "fianchettoed [his] Queen's Bishop, played [his] rook to c7, played a centrally placed Knight to attack his opponent's King's defences and check-mated him". Job done. He reckons he never actually lost for the LL first team, which is no mean achievement.

As well as running any number of Wimbledon teams over the years, often stepping in pro tem until someone else could be found as captain, Trevor ran the Surrey County 1st team for 12 years between 1970 and 1982. Now that is truly heroic. It ruined his Saturdays, he confided, for over a decade - his personal Knightmare! Bad enough, as I observed, that your own club mates don't return your calls (or these days, your emails) - it is the captain's cross to bear; guilty readers please note (and you know who you are). But rounding up players from other clubs? That merits a President's Award in and of itself.

So what does Trevor do outside chess?  He is a collector. Or more accurately, he is a collector of collections; and big value items at that. He has a life long passion for large Victorian, and Edwardian, villas (and the more bedrooms the better), some of which he - together with his wife -  managed professionally as care homes (after which running Wimbledon CC would seem a doddle); others they lived in, renting out rooms here and there. Trevor is happy to recount his adventures in the property market where he and his brother must have been a formidable duo when closing in on a deal. Ditto when indulging his weakness for cadillacs: the Humber Super Snipe, Rover 3.5 V-8 Coupé, S-Class Mercedes were just some of the models he was proud to have owned at one time or another, and sometimes simultaneously. John Wilcox remarked sotto voce, and with a wink, that in all the many lifts to away matches that Trevor generously provided, his team mates were unfortunately never treated to his choicest wheels - they had to make do with the Ford Transit.
﻿
To hear that Trevor has yet another connoisseur's collection now comes as no surprise. It is in his back garden, and is of maple trees (several snake-barks among them). They are just now coming to the peak of their autumn colour, so perhaps he will organise another of his fabled garden parties to celebrate the season, with his wife preparing her famous Thai sweets and other confections, renowned in the neighbourhood where they now live. It is up the hill from Coulsdon CCF HQ, and Trevor and the Mrs are to be seen most days power-walking or gently jogging around the Green. It accounts for his enduring energy keeping Wimbledon CC running so smoothly, and long may he do so.

And thus we conclude this small appreciation of Trevor Brugger with best wishes for continuing service to English chess. He keeps the local wheels turning - as do many other unsung heros - to give the likes of me the chance to push some wood, and to provide a launching pad for greater chess talents to progress on to higher things. May he enjoy many more years of good health, and of his love of rambling mansions, stylish motors and beautiful trees. And if the ECF is short of an idea for a token of recognition: whisky is his tipple.

Joe Gallagher and Andrew Kinsman regularly turned out for Trevor amongst many other strong players. Trevor is also well known for his system of arranging fixtures (could be the forerunner of Lotus and Excel?) often seen in action at the Surrey Fixtures meetings which allowed him to arrange the dates for 6 teams in the Surrey whilst avoiding clashes with the other 6 teams in the London and Thames Valley leagues !
JS

Never heard of the gentleman, but I know the type, and we can't have too many of them. Congratulations.

I'm one of those who've turned out for Wimbledon as my second club. Not in the Gallagher/Kinsman class for sure - but never receiving anything but the utmost courtesy from Trevor. Astonishing to think that he took over Wimbledon the year I was born.

Definitely one of the chess world's very good eggs.