Up to this point an exact replica

On Wednesday we were discussing Ray's plagiarism of the notes made by various commentators on the thirty-second game of the 1984/5 world championship match, a match that Ray attended (or some of it, anyway). This visit resulted, not long after the match's end, in a book, published by Batsford in 1985. I have a copy, the cover of which you may see, ineptly reproduced, below. 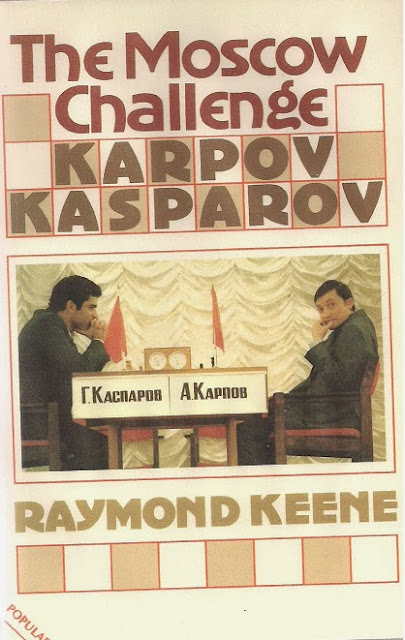 Talking of inept reproductions, here's another one, showing the notes to the thirty-second game, which appeared on pages 100-103. 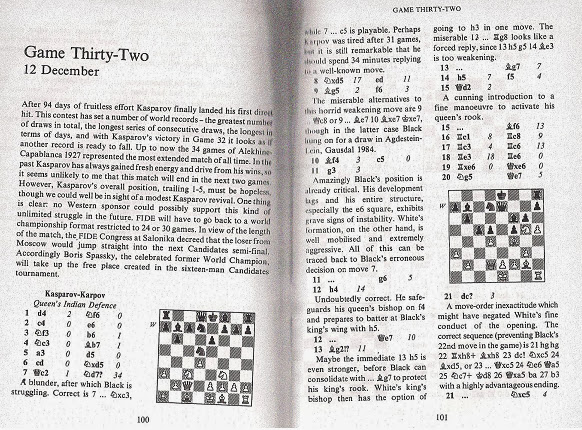 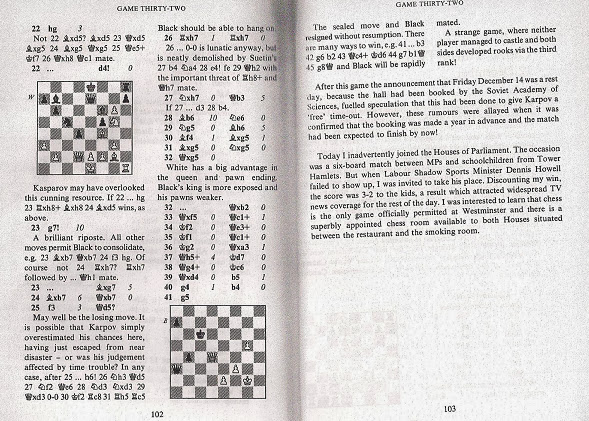 It's a reproduction in more senses than one, since if, after reading the above, you take a look at the chess column in the Spectator for 22 December 1984, you'll find a lot of it very familiar.

I've probably cut the Spectator excerpts a bit more crudely than I normally do but not, I think, quite as crudely as Ray's original copying. Here's a selection: 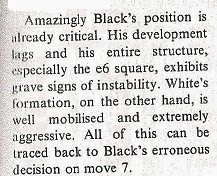 As I said on Wednesday, given that Ray had already reused these notes at least once already, I don't know why he bothered plagiarising Garry Kasparov On Modern Chess - he could have used his own old Spectator notes just as easily.

Not all the notes in The Moscow Challenge were ripped off from the Spectator, but a large proportion of notes to the decisive games (but not just the decisive games) were mostly copied from the magazine. Here, for instance, are the notes to game nine, which appeared on pages 47 to 49 of the book: 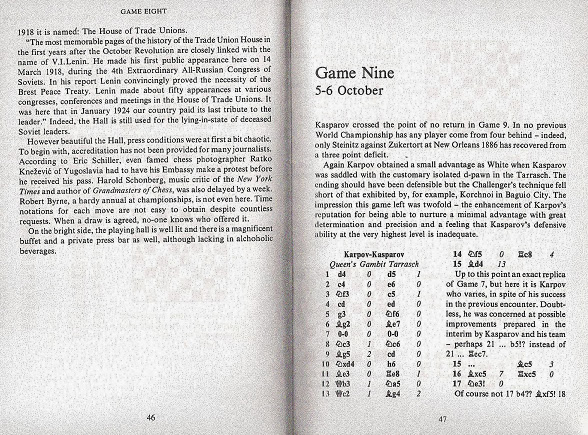 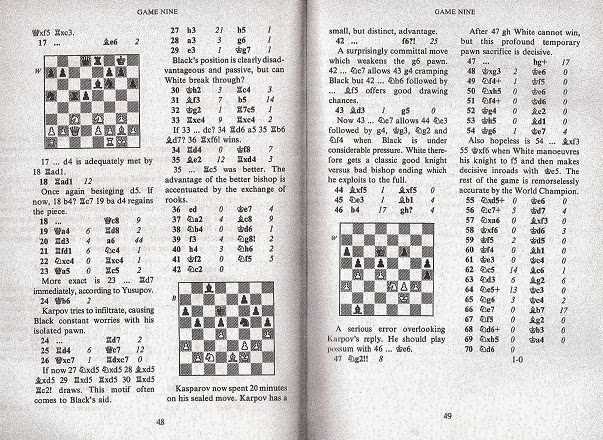 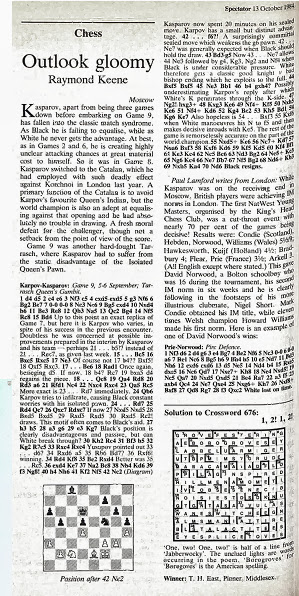 Should you happen to have a copy of the book, you can of course take a look at some of this recycling for yourself: a list, not necessarily exhaustive, of promising areas to look would include the following.


I'd like however to show you, briefly, two other examples. One is game sixteen, which appeared in the Spectator for 3 November 1984 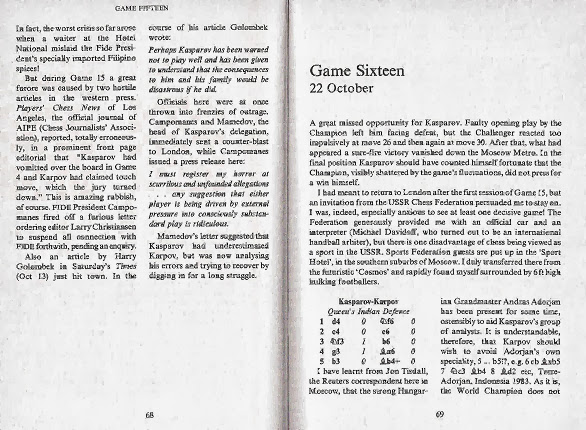 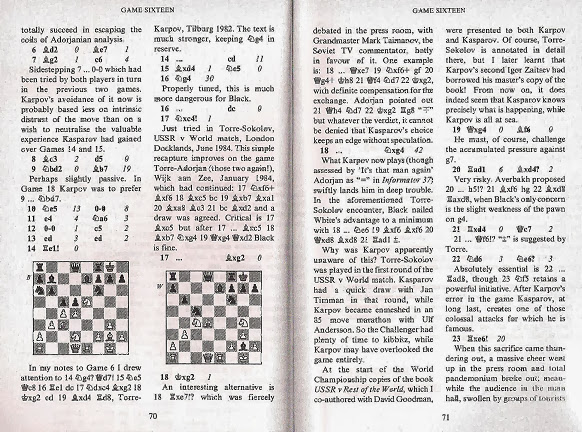 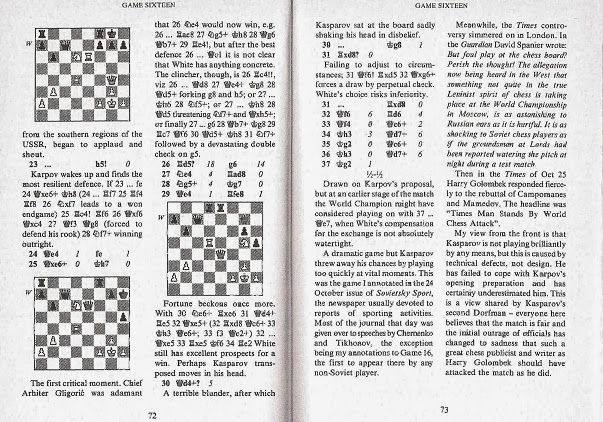 I won't go through this in its entirety, but the recycling is so shameless that the introduction in the book 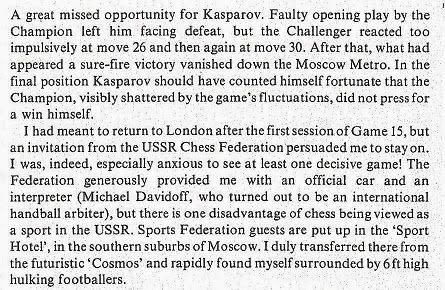 is lifted almost word-for-word from that in the periodical. 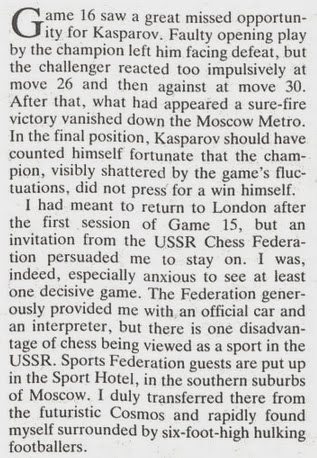 As you may ascertain to your own satisfaction, many of the notes are similarly copied, right up to the one that follows the draw agreement.

In fact, so lazy was the copying that Ray couldn't even be bothered to change the tenses from present to past: hence this Spectator note

appears thus in The Moscow Challenge

Then, there's game thirteen, which you'll find in the Spectator column for 27 October 1984 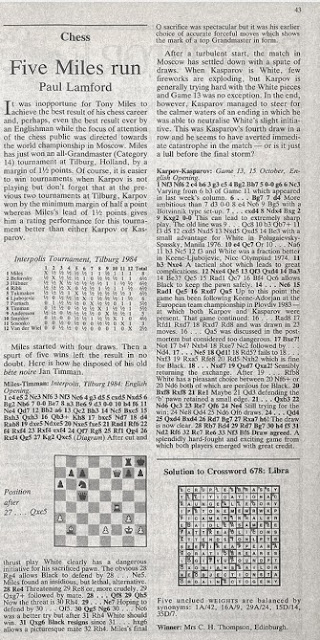 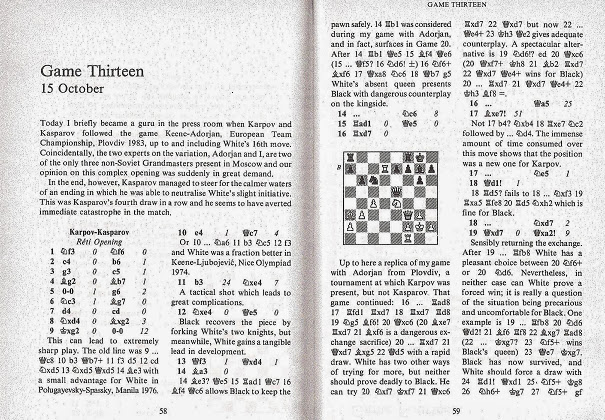 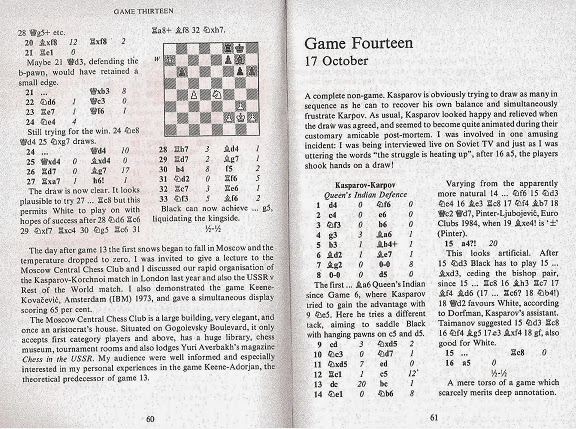 I won't trouble the reader with all the copying, which is pretty extensive, but here's some examples:

but other than that little effort has been made to depart from the original. Which is particularly curious, since the original column wasn't by Ray Keene.

So that constitutes plagiarism, does it not?

You or I may surmise that the game thirteen notes under Lamford's name were conceivably written by Keene himself, but that is not what it says, and in the absence of anything from either individual to say so, plagiarism is what it is.

And shameless, dishonest recycling of old notes is what the rst of it is. Here's the Acknowledgements, from page iv of the book. 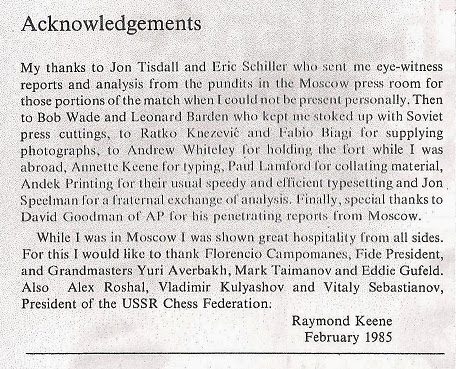 One wonder who knew this, and how much. Ray, of course, knew everything. Paul Lamford, for his part, may or may not have noticed that notes that had appeared under his own name were reused unacknowledged in a book published by the imprint for whom he was a Technical Editor. 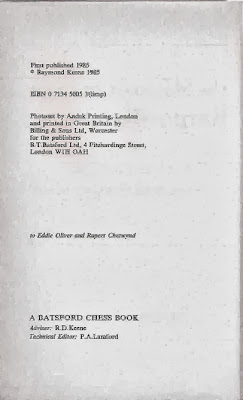 This was not an isolated occurrence.

UPDATE: Since a generous reader has sent me the originals of the Spectator pieces, I've replaced many of the images taken from the periodical's archive with what I hope are easier-to-read versions directly from the originals.

I was also amused, on looking at the originals, to see this, in the column for 22 December 1984. 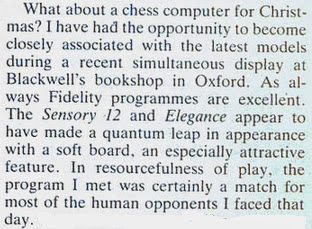 Amused, because one of those human opponents, resourceful or otherwise, was me.

By the by, readers are informed of the spanking new Plagiarised by Ray Keene Index (now with proper, correct URL!) which takes the information from the Ray Keene plagiarism index and catalogues the people and publications plagiarised.

I agree that somewhere the book should have said that it was based on material first appearing in the Spectator. But wasn't the Batsford book an example of the "instant book" genre, designed to appear within days of the match completion.Basing such a book on contemporary magazine columns is one of the methods used and such an approach contributed to the falling out with Korchnoi after the 1978 match.

In the pre Internet days, an instant book preserved the contemporary reports in a more permanent form than a collection of magazine cuttings.

Basing such a book on contemporary magazine columns is one of the methods used and such an approach contributed to the falling out with Korchnoi after the 1978 match.

Oh indeed. And if you look at your copy of the 1978 book you'll notice, on the copyright information page, a paragraph thanking "the Spectator for permission to draw on material which appeared in articles during the match".

Why hasn't "The Penguin" been tarred and feathered and run on rail out of town?

Maybe because he has powerful and influential friends and backers??

One thing RDK *does* know is how to network.