“Evidence matters. And we should all ask for it. Anyone who wants us to vote for them, believe them or buy their products should expect us as voters, consumers, patients and citizens to ask for evidence ... The launch of this new website means that everyone making a claim is now on notice that they might be asked for the evidence.”

#askforevidence. Because the world is teeming with charlatans, well-meaning simpletons and common or garden bullshitters. The chess world especially so.

The Ask For Evidence campaign isn’t new. It was established back in 2011. It’s got its own twitter hashtag and everything. What is newish is the website that came online last October. A month later it featured an article with the title Help spread the word about Ask for Evidence.

We want to spread the word about the importance of asking for evidence. We want politicians, NGOs, companies and anyone making a claim to expect to be asked for the evidence behind their statements. Here are a few ways you can help.


If you've seen advice about how to keep yourself healthy, or heard claims about how to reduce crime or improve education, or seen product advertising that you want to know more about - then Ask for Evidence using the site. And let everyone know you're standing up for evidence and holding people to account ...


Not surprising that politicians and health claims are first on those lists. With regard to the latter, accurate information about health matters is vital for everybody (which probably explains why it's of such interest to the aforementioned dodgy geezers, eejits and blowhards).

When asked to justify his dubious unsubstantiated claim about chess and dementia research (Doctor Garry is In), our man merely sub-contracted the work to Leonxto Garcia then went silent. No matter. If Gazza isn’t talking we can always ask his right-hand man Mig Greengard.

Our friend Mig was back on the twitter talking about chess and dementia just a few days ago. More on that in due course. In the meantime,  here’s what he had to say the first time around. 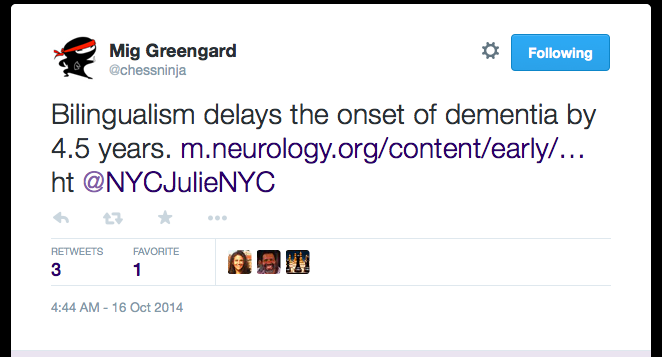 
If you’re reading this you probably know who Mig Greengard is. For those that don’t, @chessninja’s twitter bio tells you what you need to know:-


Hand of the King, indeed. How Life Imitates Chess was written by Kasparov "with" Mig.


Anyhoo, last October - ironically this was a couple of weeks before the Ask for Evidence campaign website was launched - I noticed Mig’s tweet about bilingualism and dementia in my twitter time line. It’s a really good use of the medium. Highlighting an interesting topic that hints at one way we might be able to take advantage of something that we already know about tackling dementia: that an intellectually active lifestyle can be beneficial*.

Best of all, though, it’s not just some guy gobbing off on the internet about something he believes/thinks/claims is true. You don’t have to take Mig’s word for it and if you’re interested you can dig a little deeper. You can do that because he chose to provide a link to the journal article where the research that he references is written up.

Talking of dementia, @chessninja, any chance of getting The Boss to retract & delete that nonsense tweet of his?

I’m not sure how I thought Mig would reply to this. He was hardly likely to come back with, "Well, geez, you know Garry. Prone to shooting his mouth off about things he doesn’t fully understand and isn't great at recognising when he’s out of his depth. What am I supposed to do? *shrugs*", was he?

I’m not sure I expected any reply at all. I certainly didn’t expect the lengthy exchange of tweets that followed.

I’m not going run through the whole thing**. You can follow the links if you are so inclined***. Read it all in your own time and decide for yourself "went off on one" is a reasonable summary of Mig’s response.

Let's cut to the chase. After many many tweets we ended up here:-

Simple challenge to you @chessninja and @kasparov63 publish full citations of those "many studies" or retract the tweet.

Glory to the Jihad

I must admit this reply surprised me. Do the Kasparov camp really see Asking for Evidence as a fundamentalist absurdity and not a mainstream activity encouraged by scientists? Yes they do.

The conversation went on, Mig offering justifications when all I wanted was to know what these "many studies" were supposed to be.

@chessninja Again, I ask you: will you commit to publish the studies that you say support’s GK claim? Simple yes or no will suffice.


and once more for luck,

@chessninja One last time Mig (I’ve got Twin Peaks to watch) will you commit to publish details of studies you say support Gary K’s claim? 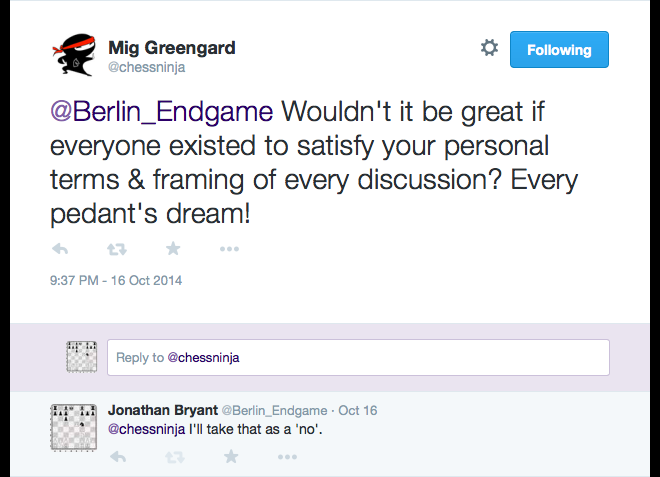 
And there you have it. In the Greengard-Kasparovian World, Asking for Evidence isn’t the scientific method. It’s the personal whim of a pedant.

However, out of the blue a few hours later, there came a sudden about turn:-

What brought that about I don’t know. I can’t say that I say it coming. What didn’t surprise me, though, was that Mig did not in fact proceed to "post all the materials". Or any of them, in fact.

Well, not yet. Who knows, maybe he still hasn’t quite made it back home. I’ve heard the subways out to Brooklyn can be a little unreliable.

Returning to this several months on I have to say I find myself feeling rather sad. Mig is no fool and yet there he was obfuscating, engaging in sophistry - trying to claim a distinction between "exaggerated" and "misleading", for example - and making promises you’d be forgiven for thinking he never had any intention of keeping.

as his twitter bio says. Well certainly Mig is responsible for what he writes, just like anybody else. And yet all this happened because his Boss made a wild and unsubstantiated claim about health matters and couldn’t bring himself to respond when Asked for Evidence.

* "Research suggests that people who take part in mental activities (such as reading, learning and doing puzzles) are less likely to develop dementia compared with those who do not engage in these activities."Alzheimer’s Society: Am I at risk of developing dementia.

** Although I will just take a moment to show that, just like Gazza, the very first tweet that came back simply referred the matter to Leonxto Garcia.


*** The narrative is not so easy to reconstruct, the threads getting blurred as we each replied to various tweets of the other, but following the link will certainly give you a clear gist of what was said.
Posted by Jonathan B at 8:00 am

So the nub of this seems to be chess hasn't been 'classified' as a activity which stimulates the mind. You seem to be arguing by authority by suggesting it's important that chess hasn't been published in an academic paper in a list of mind stimulating activities. But you don't need to be a scientist to assert that.

No Justin. The 'nub of this' is that (a) kasparov claimed studies existed and hasn’t supported that claim with any evidence
(b) that asking for evidence is a mainstream activity encouraged by science
(c) that Mig Greengard seems to hthik I’m a fundamentalist loony for not taking Kasparov’s word for it that the said studies existt and that they say what he was they say
(d) that Mig promised to published the relevant evidence that would support Kasparov’s claim but didn’t follow through on that promise.

I’m not arguing by any authority at all. I’m putting forward an argument. Nowhere do I say that you should believe this argument purely because I say it.

Frankly, I could write a lot more but if you’ve rather missed the point of the whole article I’m not sure that me saying it all again will help.

I’m not interested in your assertions of what is true, nor Kasparov’s nor anybody else’s - see tomorrow’s post.

Send as your comment again with some kind of reference and I’ll publish it.


The second comment I just find unintelligible and I have no idea what it is you’re trying to say. If you rewrite it in a form I can understand then I’ll publish that too. However, if you’re going to try to argue that Kasparov has provided evidence that justifies his "many studies" tweet you’re going to have to demonstrate what that evidence is.

If I'm ever asked for evidence and fail to provide it, I choose the well-meaning simpleton option.


Actually, I’ve run out of time to write this post. Have decided instead to switch things around. I will get to this issue, but it will take a couple of weeks.