Grigoriev: Falling at the last hurdle 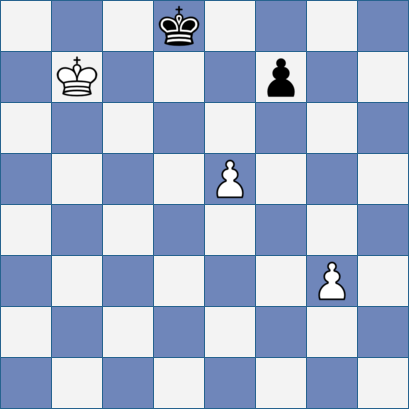 I nearly made it. The position didn’t look all that difficult so I thought I’d try to solve it in my head. I almost did too. I only tripped up at the last moment.

In truth this is not the hardest king and pawn position we’ve ever had. The first move is not exactly difficult to guess and the core of the problem is a familiar little 'opposition dance’ between the kings.

Which is why I found my way through to the end without too much trouble, I suppose. White must be winning here, I thought. If Black continues this way I’ll go here and it’s over. Black’s only other choice is to go that way and that’s the end too. Except I was wrong.

As it turned out Grigoriev had left one last trap and I had fallen right into it. The position I reached was winning, but the way I wanted to finish off was an outright blunder which allowed Black to escape with a draw.

Oh well, I nearly made it. Nearly is not bad when you’re talking about a Grigoriev study.