Chess goes to the Movies: Casablanca

Chess has been going to the movies a fair bit of late (see Cgttm: The Hateful Eight) so now seems like as good a time as any to have a look back at some of the classics. We’ll start this week with one of the most famous of them all.

Casablanca. It’s not just one of the best known chess scenes in film. It may also be unique. 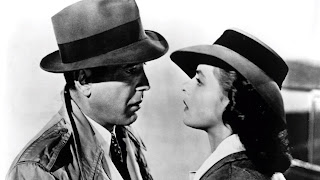 Let’s start with the kind of film that Casablanca is. In principle, I suppose, chess could appear in any kind of film about any kind of subject. There seem to be three genres in particular though, to which chess seems particularly well-suited:-

Casablanca, needless to say, is none of these. It’s a love story. It may be set during the war but it’s not a war film. What it's about is the triangle that develops after Ingrid Bergman accidentally cops off with two dudes - Bogie and Paul Heinred - at the same time.


A central narrative focusing on a female character having to choose between risky excitement and dull worthiness is a cliche that Hollywood fails to avoid like the plague, for sure. Chess appearing in a romance, however, is pretty rare to say the least. 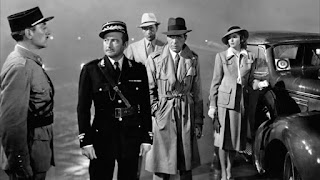 So much for genre, let’s talk about theme. As far as why chess appears in a particular film goes - the function it serves - we’ve seen a whole spectrum in Cgttm so far.


We get some of this in Casablanca too. Rick is bright and devious. He manipulates various pieces - Nazis, French authorities, the criminal underworld and business competitors - in the dangerous game that he plays and he'll come out a winner.

So we discover a good deal about about Rick from one glance of him at the chessboard. More than that, the chess game also gives the scene a little visual texture. The audience has something to look at whilst Peter Lorre sets up the story with his … blah blah … two German couriers ... blah blah ... letters of transit … bit


Casablanca also gives us something extra, though. Something we don’t see in any of those other films.


As the story unwinds we find out Rick is a loner. He has no countrymen - he’s an American living in North Africa - he doesn’t have friends. He has acquaintances. He has staff. He has business rivals. He has people he’ll deal with. He has enemies. What he doesn’t have anybody with whom he’s genuinely close.

We get that in the first scene. Rick is playing chess. Alone. A commonplace activity for us, perhaps, but when does that ever happen in film? Never as far as I know. Roy Batty fiddling with the pieces in JF Sebastian’s apartment in Blade Runner doesn’t count. He’s on his own, perhaps, but there’s an opponent - Tyrell - albeit one who isn’t present at the time.

Rick won’t drink with Ugarte and he certainly won’t play chess with him. He doesn’t play with anybody. Unlike Harry Brown - where Michael Caine gives up the game when he loses his regular playing partner - Rick doesn’t have an opponent and he doesn’t need one. He plays chess how he lives his life.

He doesn’t care. Rick likes it that way. This is all clear. And yet, perhaps we also sense something more than a man who’s only interested in himself. Maybe there’s also a hint that he’s lonely. We’ll understand that a little more when of all the gin joints, in all the towns in all the world, Ingrid walks into his. 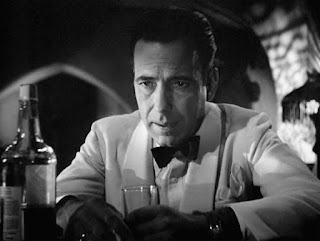 Is Casablanca a unique case? I’m not aware of any other major film which uses chess in quite the same way but it’s entirely possible somebody out there knows better. If so, I’d be delighted to hear from you in the comments box.

In any event, we’ll be on to another classic next week.

Chess goes to the movies Index