We meet again for the second leg of our virtual Streatham chess history stroll, armed with various guides to help us along (principally Tim Harding's Eminent Victorian Chess Players (or EMVCs); other initials are explained in the text or at the end).

On the first leg we ambled from Stop 1 to Stop 7 in a loop starting at Streatham and Brixton Chess Club’s venue in Streatham, via Tooting, up through Balham. We are now on the edge of Clapham Common next to another of Holden’s tube stations - a dead ringer for Tooting Bec station that we saw last time.

Talking of coincidences: we noted one or two previously, and a near-miss to boot; now there’s another one waiting for us just round the corner, at Stop 8. 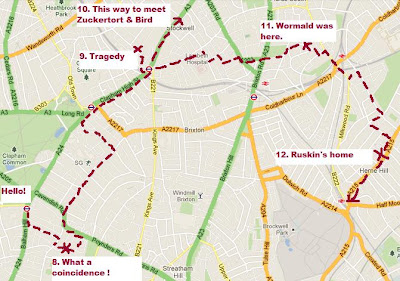 Isidor Gunsberg seemed to have lived just about everywhere hereabouts at one time or another and, as is evidenced by a letter from the Home Office in 1923 (reproduced in EVCPs), he lived at 14 Honeybrook Road, Balham back in May 1908, a few streets away from today's starting point. Well, déjà and vu, haven’t we been here before? And wasn’t it last summer?

On that occasion we were investigating Broadmoor patient and chess problemist Walter “There Has Been So Much Piffle” Stephens. He too lived in Honeywell Road, Balham, also in the early years of the new century. It’s where he committed the dreadful deed that resulted in his committal to that high-security hospital. He was at number 45 to be precise. But when? Could it be that he and Gunsberg had been living in Honeybrook Road at the same time, bid “Good day” in the street, and bumped into each other in the corner shop?

Alas, probably not. Stephens committed his crime, and was immediately detained, in late August 1905, and from Tim Harding's data (unpublished) Gunsberg moved into Balham just about three weeks later (and before I forget: both 14 and 45 still stand today in their Victorian terraces). But there’s perhaps a more definite crossing of their paths.
Stephens had his “Piffle” letter, and two of his problems, published in the Daily Telegraph on 1 July 1922.

And who was it that edited the Telegraph chess column at the time? Isidor Arthur Gunsberg, that’s who (TH following W/S). It would be nice to think that Isidor, who appears from Tim Harding’s book to have served, albeit some years before, and only briefly, controversial political causes (writing tracts for the wonderfully exotic chesser Wordsworth Donisthorpe (TH)), might have been sympathetic to the expostulations of the Broadmoor Problemist, even if he hadn’t know him personally. Nice to think; impossible to know.

Next we thread our way a mile or so north through the generous avenues of Clapham Park, lined with comfortable semi-detached Victorian villas, we join the hoi polloi in the High Street, and we go on just beyond the railway arches at Clapham North. Here, at Stop 9, we have a rendezvous with a tragic episode in chess history.
On 27 June 1944 a V1 flying bomb fell on 47 Gauden Road SW4 and extinguished the lives of Women's World Champion Vera Menchik (b. 1906), her mother, and her chess-playing sister Olga. Her story has been well told elsewhere, for instance by the West London CC. 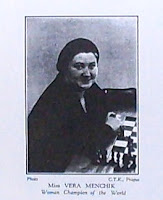 It is all the more desolate as Vera had already, in 1939, witnessed the destruction of the National Chess Centre in Oxford Street of which she was custodian, and in 1943 she lost her husband R.H.Stephenson (then Hon. Sec. of the BCF); her own number came up the following year. She was only 38. Wretched times.

An ECF thread reports that efforts to install a Blue Plaque in Gauden Road as long ago as 1962 were frustrated by the obliteration of the building in which the family lived. To be fair to the authorities its undistinguished replacement doesn't seem worthy enough to bear such a poignant commemoration.

At the scene today

Now you now have a choice. If you fancy flogging on up the A3 for ¾ mile to Stockwell and Stop 10, you are more than welcome. If you do: stroll on and imagine the imperious Legions barrelling towards you down the old Roman Road. 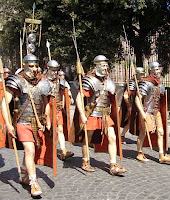 But don’t, while lost in your reverie, carelessly step off the pavement. Nearly 2,000 years later squadrons of commuting cyclists also expect clear passage on what is now blue cycle Superhighway C7, and they, too, are disinclined to take prisoners. 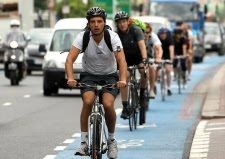 When you get to Stockwell find John Ruskin Street off to the right where, before it changed its name from Beresford Street (TH), Johannes Zukertort (Chapter 8 of EVCPs, and in the news again with the splendid restoration of his grave, championed by Stuart Conquest) lived, and died in 1888 aged only 45. 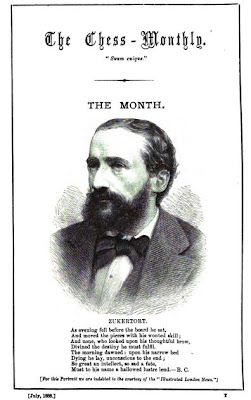 Notice of Zukertort's death in Chess Monthly July 1888
- the magazine he co-edited with Leopold Hoffer.

He had lived at number 187 (original building no longer extant) on the right, half-way along toward the Walworth Road end. Bird then lodged maybe a mile away near to the Elephant & Castle at 5 Heygate Street (HB; original building gone), and as Bird reminisced later (HB), he and the “incomparable” Zukertort spent time, and more, together. Zukertort, now in straightened circumstances, confided in his friend, who subsequently saw to the care of his “two beautiful daughters”. The secretive Zukertort never publicly admitted to a relationship, married or otherwise (TH).
You may prefer to omit the above detour and head eastward for Stop 11 over near Brixton, passing en route Vincent van Gogh's brief domicile (see note). According to the 1871 Census (EW) R. B.Wormald (1834-1876) lived at 11 Angell Road (Stop 11). As with those above, the address has long since been redeveloped, so there's not much to see. 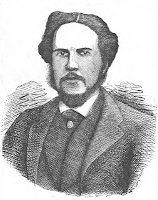 R.B.Wormald
From the Scientific American Supplement in 1877

Wormald gets a walk-on part in EVCPs. He was in the thick of the disputatious Victorian chess scene, attracting Steinitz’s particular opprobrium for carelessly recommending a blunder in his 1875 Chess Openings. Wormald had his supporters, though after 1. e4 e5 2. Nf3 Nf6 3. d4 exd4 4. e5 Ne4 5. Bd3 surely only the most loyal would now play the “perhaps better still” 5…Qe7. His name lives on, in my ancient 13th Edition of MCO anyway, for 5. Qe2 in the main line Ruy Lopez. Against the grain of those buttoned-up times, Wormald indulged a penchant for Queens in original, and maybe compromising, positions.

So we now we go south, and beyond Brixton (in which Prison your blogger briefly played chess) passing by Ruskin Park – a hint of what comes next – to Herne Hill where "The Professor" himself lived (Stop 12). Actually, in London and indeed the whole country, you can’t get away from him. There are over 200 Ruskin Avenues, Closes and whatever, nationwide. In this neck of the London Borough of Southwark, along with Ruskin Park, there comes a Ruskin Walk (once his favoured footpath) and a JR School. We've referred above to the JR Street up beyond Stockwell, and there's a Ruskin Way in Colliers Wood 3 miles south west.

The local interest is explained by a plaque, retiring under a shading tree, just inside the front fence at 26 Herne Hill, SE24. 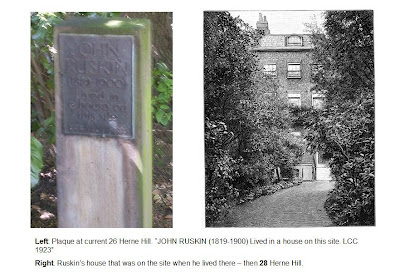 We won't get waylaid here by Ruskin's prodigious and polymathic outpourings, celebrated on so many street corners, although his compendious writings lit up the intellectual scene, and he even burned brightly as a cigar. 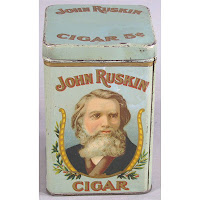 Let's just stick to his chess, but only for a short while as it has been a hard day's strolling. He was a devotee of the game. References to it pepper his writings and correspondence. Bird for example was on the receiving end of 28 (and possibly more) letters from the great man (HB). He also sponsored chess competitions, for which he offered his autographed volumes as the prize (!).
Ruskin was of the Sturm und Drang school and thought the fun went out of a game if the Queens disappeared. "The working out of an end-game is repellent to him", his "preference was for a game compacted of volcanic means to a violent end" said "F.W.L." in BCM. You can assess JR's strength from his comment on this position from a Morphy v Amateur game: "a most lovely game, but I can't do the mate." Ruskin couldn't. Morphy could with his eyes shut. Can you? 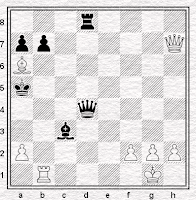 Many streets may bear Ruskin's name. The local station doesn't and it has remained "Herne Hill", where we'll take another break, and where we'll meet again next time.
Acknowledgments/sources etc.
BCM: British Chess Magazine 1923-1932 An Anthology. John Ruskin and Chess. Article from 1923.
EW: Edward Winter's Chess Notes: The Steinitz-Wormald-MacDonnell Controversy; and John Ruskin and Chess (to which a fellow SBCBlogger contributed a chess-related Ruskin discovery).
HB: Henry Bird Chess History and Reminiscences (downloadable).
TH: Eminent Victorian Chess Players (or EVCPs). Tim Harding. McFarland &Co. 2012.
TH following W/S: Whyld, Ken. ed. Chess Columns: A list (Olomouc: Moravian Chess 2002), Modifed by Alan Smith. (given in TH).
Wormald's 1875 Chess Openings is downloadable from Chessville here.
Picture sources.
Clapham South tube from Wiki. 28 Herne Hill from here. Roman Soldiers from here. Ruskin cigar tin from here.
Superhighway from here. Wormald from here.
Menchik image is edited from BCM of 1931, reproduced in British Chess Magazine, 1923-1932, An Anthology, published by them in 1986.
Zukertort image comes from Chessville's downloadable Chess Monthly Vol IX (1887/8). Stuart Conquest has a nice article in which he teases that Zukertort and Vincent van Gogh's paths may have crossed (as I suppose might VvG's and Wormald's). Vincent lived at 87 Hackford Road, Brixton in 1873/4, where he gets a Blue Plaque.

This and other unattributed pics by MS.
Streatham Strolls 1

A superb read, thank-you very much. As a keen chess player myself (although not very good), I am often at a loss to see why my fellow opponents don't do more of this sort of thing. Nothing like a brisk walk and the fresh air to liven up a game afterwards! Okay, you're in London, so you'll have to make do with the air as it is...

Thanks, a really enjoyable read. There's nothing like a brisk walk and some fresh air (even London air) to liven up a chess game afterwards!