As Jonathan alluded to on Sunday, I live with the new British Champion. I wouldn't want to take all the credit, but our tenancy has coincided with a pretty spectacular period for Gawain. 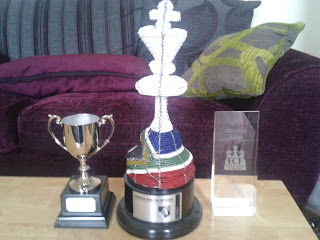 From left to right, we have the British Championship, the Commonwealth Championship, a cushion, and the ECF Player of the Year trophy. So not only is he crushing, he's popular too. Hot damn.

I caught up with him in the kitchen.

PJM: Congratulations! You've been one of the most recognisable names in English chess since you were very young, but when did becoming British Champion actually become a serious ambition?

GCJ: I think 1994 was the first time I ever played in a British Championships  and I  won my first couple of titles in 1996; the Under 8s and Under 10s. I remember watching the top games excitedly back then and dreaming of joining in at the top level and playing the GMs. From the Isle of Man British in 2005 I thought I had some chance at first, and was disappointed losing in the final round in Liverpool 2008. That was a good opportunity seeing as a few of the top players were missing. However, it's only the past couple of years that I've really focused on the title and taking it seriously. Last year was of course a really strong British and I would have required something really special to finish ahead of Mickey and Nigel. In 2011 I just wanted to play well, but this time I was only interested in first.

PJM: In the first play-off game, what were your emotions after 23. Bh5?
GCJ: Dread! After trying so hard all tournament it seemed like I'd given myself such a huge handicap. I'd basically given up on the first play-off game and was just trying to prepare myself for the second game. I was thinking that the Armageddon game was suddenly my only chance. I felt if I could at least put up a bit of resistance then he wouldn't have such a huge psychological advantage in game two.

PJM: What did you say to Ste after the play-off?
GCJ: I apologised. It was a very cruel playoff for Ste after he'd played so well in the tournament, especially considering he's got a full time teaching job these days. It simply came down to nerves and had very little to do with chess anymore. Obviously we both really wanted our first British title and you could see that in the quality of the play-off games. 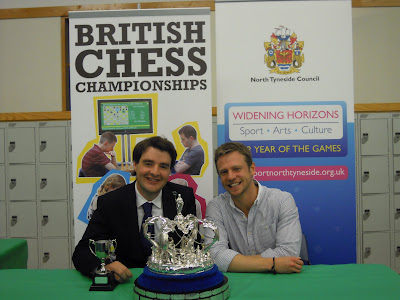 PJM: Do you feel that the format of the Championship needs revision?
Yes. I think the problem is a lack of sponsorship and to make ends meet the organisers have been obliged to allow more players to play in the main Championship at exorbitant prices. I remember when I first played I was roughly 2200 and one of the weakest players in the tournament. This time with that rating I'd have been comfortably been in the top half. A side-effect of this is that the Major Open is practically dying. Very few players competed in it this year as all the usual players could play in the main British this time round.

Personally, I think there are a couple of options. For the top players I'm sure we'd all love an all-play-all format with perhaps the Major Open becoming a qualifier but this would require serious sponsorship. Otherwise, the British should be pruned down to under 50 players, perhaps allow all GMs and IMs to play plus ten qualifying spots scattered around the country around the year. These days it seems every tournament has a qualifying spot; I even saw a 'stars barred' tournament advertising a British spot - how does that make sense?

A gripe that I think virtually all the players have is accelerated pairings. This year we had 64 players over 11 rounds and yet we accelerated for the first three rounds. I've never understood the reason for this and, as I observed at the time, it would mean the top players would have run out of opponents by the final round. Sure enough both David and I played 2200s in the final round as I had already played all the other GMs in the field. The acceleration always seems to make the standings very artificial and takes practically the whole tournament for the players to get back to more or less their correct positions.

I know Malcolm Pein has been advocating lowering the number of rounds so that people only need to take one week off work, which perhaps makes it a better model financially. But it seems a shame as we don't get to play many 11 round tournaments these days.

PJM: As your rating increases, playing in Opens becomes more of a risk. Now that you've achieved the title, will you continue to play in the British?

GCJ: The British is a very special tournament and I'll continue to try and play but yes, it's not so easy to keep your rating intact in Opens, despite what Hikaru [Nakamura] might tweet! It's quite difficult playing tournaments where you have to win every game. I was very pleased with my performance but my expected score was 8½/11 so I only gained five rating points! Playing underrated juniors and needing to score 92% to break even is tough. I hope that next year's 100th anniversary will have all the top players in the country; that would make it very entertaining and ensure I don't have to go for broke in every game.

On a related note, you guys should try and figure out where the players ranked World Nos. 50-150 actually play! We're generally not ranked high enough for the prestigious closed tournaments but playing in Opens where we're expected to score something like 7.5/9 is a good way to drop a lot of rating points. 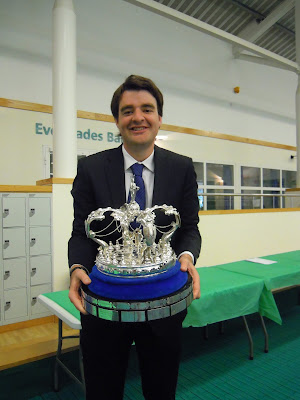 So now we know that the British Champion is also pretty outspoken. It's good to know that he's happy to represent his fellow professionals.

Thanks to Gawain for answering the questions and Phil for asking them. It's certainly refreshing to hear some honest responses rather than just platitudes.

PS: Other S&BC Blog interviews can be found here.

I've never understood this whole "not playing in Opens because of the danger to my rating" thing. The rating indicates one's current playing strength relative to the competition. If one's playing strength has not changed, he should expect to be able to at least maintain his/her current rating without too much trouble, correct? Or is there something broken about the rating system that makes it more likely to go down, regardless of whether the player is playing "up to strength"?

RuralRob: there is something broken about the rating system at the moment, and it shows up very clearly in Open tournaments. It's the fundamental assumption of the system that the population's overall playing strength stays about the same, which just isn't true when you consider just how many fast-improving players there are relative to fast-worsening players.

(A minor point with regard to Gawain's proposals, by the way: they're not self-consistent - the British Isles has way more than 50 active GMs and IMs.)

yes, but it doesn't have anything like 50 GMs or IMs who want to take two weeks off work to play in the British.

True, but setting up your rules for an event so that they are not self-consistent is a recipe for trouble in the long run.

I took Jonesy's response to be a call not so much for the strict limitation of the field to a certain number, but for the entire field to meet a certain minimum standard.

Surely a tournamnt of 70 IMs and GMs (plus ten qualifiers) would be acceptable to all?