Streatham Strolls In The Country Continued

We started this Streatham Stroll In The Country last week (there were three Strolls before that: 1, 2 and 3). Now it is Streatham Strolls In The Country Continued.
We are still on the train from Victoria, heading south to a destination further down the post. To pass the time en route we have been discussing the chessic inclinations of the four subjects picked on by Lytton Strachey for his radical biographical suite Eminent Victorians (which Tim Harding elaborated on as the title for his “Eminent Victorian Chess Players”) in the hope that we might find some Eminent Victorians Who Also Played A Bit Of Chess.
We’d better get on with it as we’ll arriving shortly, and will then be off on a country ramble.
We've dealt with one of Strachey’s victims: Cardinal Manning. The Cardinal elicited a “he schemed like a chess player” jibe from his passed-over critics in the Catholic Church, but there was no evidence that he actually played. Maybe we’ll have more luck with the others: General Gordon of Khartoum, Florence Nightingale, and Dr Thomas Arnold, Headmaster of Rugby school, with whom we will start today.

The Doctor produced copious correspondence, and copious though it may be only two chess references does it yield. The first is in a letter of February 1824, four years before Arnold's fateful appointment as Headmaster of the prestigious public school Rugby. He says:

"..My pupils all come up into the drawing-room a little before tea, and stay for some time, some reading, others talking, playing chess or backgammon, looking at pictures, &c. – a great improvement if it lasts;…"

So here he is, at the age of 32, supervising some pupil down-time in an obscure minor public school, and it seems improbable, wouldn't you agree, that someone of Dr Arnold’s driven conscientiousness would put himself in a position where he would be unable correct his pupils’ halting efforts at the board, and (ahem) beat them should the need arise. But nevertheless, if Dr. Arnold was able to play, we’ve not caught him actually pushing a pawn.

Six years later the challenge of running Rugby fires him up, and in this letter his Messianic world view frames his vision:

"..the work here is more and more engrossing continually; but I like it better and better; it has all the interest of a great game of chess with living creatures for pawns and pieces, and your adversary, in plain English, the Devil; truly he plays a very tough game, and is very hard to beat, if I ever do beat him. It is quite surprising to see the wickedness of young boys; or would be surprising if I had had not had my own school experience and a good deal since to enlighten me. "

This is the Chess Metaphor writ large and served up with a helping of fire and brimstone. It is chess as morality play: Black versus White; Good against Evil; Dr. Arnold and the Devil contesting the souls of boys. But could he actually play? Alas, again the evidence is but slim and circumstantial.
And Gordon of Khartoum? In brief, there was no sign (from my quick inspection) in his own writings that the General found the time, or had the inclination, to chess, what with his religious fugues, scribbling frenzies, and brandy 'n soda befuddlements. But what about Wilfrid Scawen Blunt who wrote a memoir in 1911, Gordon at Khartoum ? Maybe he could help.
Blunt was a poet (a minor talent, it is said) and a writer, with the means at his disposal to indulge his interests in the fine arts, travel, anti-imperialist politics (for Egyptian autonomy and Irish independence), thorough-bred horses, and (energetic chap) the ladies. His idealism drove his activism – he enjoyed a brief spell in gaol for his Irish adventures - just like his 20th Century namesake Anthony Blunt (also a connoisseur of the arts, and a spy) who, according to his biographer, was related to Wilfrid.

In order to stop British meddling in Egypt, Blunt W. lobbied the sinister sounding “Fourth Party” (the Tories' very own enemy within), one of whom was Lord Randolph Churchill MP, father of Winston, chess player and habitué of Simpson’s. Blunt wrote:

"…I met him to discuss the situation at some rooms in the Strand where a chess tournament was going on. Chess was one of his few hobbies and he asked me to meet him there…”

Well! Simpson’s as a den of intrigue and machination: very House of Cards, and apart from its demise as a "chess resort" it seems that nothing much has changed.
Sadly this takes us no further forward in the matter of General Gordon and chess, but it has lead us to Lord Randolph Churchill MP (1849 - 1895) who indeed did play; and in fact a quite a bit more than a bit: he was sometime vice-president of the British Chess Association.

Here is a link to a casual game he lost to Steinitz. So, instead of General Gordon, Lord Randolph Churchill MP will do very well as an Eminent Victorian Who Really Could Play Chess.

And talking of MPs, let’s turn to the final EV, Miss Florence Nightingale. Strachey relates how she dragged the blustering British military establishment out of the Stone Age to provide decent care and treatment for its wounded and battle-scarred soldiers - in her later years from the redoubt of a darkened room. She never married, though she wasn't without her suitors; and that included a proposal of marriage when she was 20, in 1840, from Marmaduke Wyvill (1815-1896), later to become both an MP (in 1847) and, according to Staunton, "one of the finest players in England". He was runner up to Anderssen in the 1851 London Tournament, and had a pawn formation named after him (pawns on c3, c4 and d4 or 5, and no b pawn - by coincidence it turns up in the Steinitz-Churchill game linked above). Altogether remarkable.
If at 20 Florence had accepted him, and knew the moves, we might have got what we were looking for. As it was she declined, went into nursing, and the rest is history. And that, I'm afraid to say, is the closest we can get any of the four EVs to a proper chess player.
Right. We’ve arrived. Here we are in Lewes. No time to hang about. It’s a three to four mile stroll following The Saturday Walkers Club Walk # 24: Lewes to Saltdean, and this is the route. 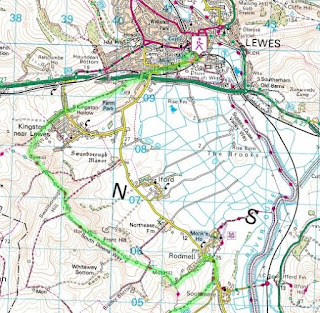 When we get to Rodmell we'll visit Monk’s House which Leonard and Virginia Woolf, two leading lights in the tangled Bloomsbury Group, used as their country retreat from 1911 to 1969. 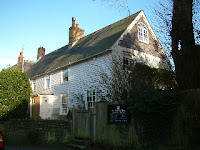 And of course Lytton Strachey, a fully paid-up Bloomsberry, often came to stay. Rodmell is now owned by the National Trust, and it has a delightful garden looking out over the South Downs.

In the garden there is a summer house where Leonard installed a writing desk. 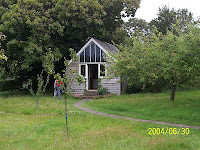 The National Trust uses it to display old photographs of eminent visitors taken at the time. Let's take a look. 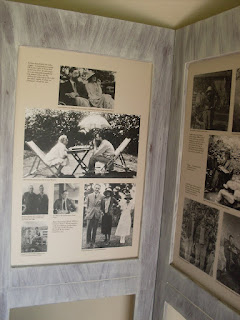 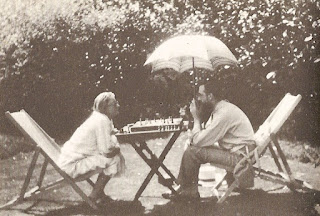 And so we come, at last, to a conclusion: although there is next to no hard evidence that any of Lytton Strachey’s four eminent Victorians played chess, he could himself; and so it is he who merits the claim of Eminent Victorian Who Could Also Play A Bit Of Chess. Well, Eminent Edwardian anyway.
Let's give him a proper place in chess history and go back and add him to Streatham Strolls 2, because Lytton Strachey, biographer and critic, was born, on March 1st 1880, in Stowell House, 46, Clapham Common South Side (still standing in 1947, but now gone). 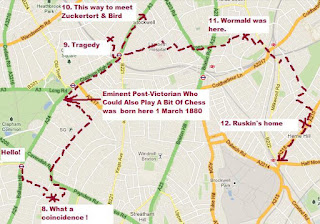 Acknowledgements and sources
Details of Tim Harding's EVCP and Strachey's EV are in earlier Strolls.
Flo Nightingale from here; Cardinal Manning from here; General Gordon from here; Dr Arnold from here.
Dr. Arnold Correspondence is downloadable here.
Wilfrid Blunt from here; his Gordon at Khartoum (1911) is online here; Anthony Blunt from here; See Miranda Carter Anthony Blunt, His Lives, MacMillan (2001) for the "Blunts are related" point; Randolph Churchill pic is from Wikipedia. There is more on his chess here. O.C.Müller also reminisces, in BCM of 1932, about Churchill and other politicos in Simpson's Divan.
The proposal story is given by Mark Bostridge in Florence Nightingale The Woman and Her Legend ( (Penguin Group 2008). Wyvil (and her other romantic interests) is in a display at the Florence Nightingale Museum (with thanks to Natalie Cohen, Collections Assistant, for her help). I picked the story up initially from here.
See Kmoch on the Wyvill formation. 'Wyvill is the finest' is given by Keene and Coles in their 1975 book on Staunton, but not referenced.
Monks House is from Rodmell village; the garden is from here ; summer house from here; Lytton and Marjorie playing chess from here.
Streatham Strolls 1
Streatham Strolls 2
Streatham Strolls 3
Streatham Strolls in the Country
Posted by Martin Smith at 11:00 am

Many thanks, Martin. Riveting, as always. So Marmaduke Wyvill proposed to Florence Nightingale? Who'd have guessed?

Perhaps we should do a Richmond Ramble sometime.

One question: your second quote from Arnold. Is "my won school experience" correct, or should this be "my own school experience"? (Arnold's problem is that he's assigning 19th century adult morals to young children. Most young boys are cruel and violent - which is why they like chess - but very few are wicked.)

Thanks Richard. I've corrected the typo in the Arnold quote.

The Marmaduke/Florence story is almost too good to be true, isn't it? The Museum has given me the references to the primary sources, and when I have checked them out I'll post again.

This reminds me of someone else - I can't think who!