Streatham Strolls In The Country

Streatham Strolls 1, 2 and 3 explored the chess history of our South London neighbourhood, and it was Tim Harding’s Eminent Victorian Chess Players that showed us the way. On the path we found the heavy footprint of five of his Victorian chessers and also, here and there, the lighter mark of various contemporaries.
As for today: Streatham Strolls In The Country, so please come suitably kitted out, with an umbrella just in case, and meet at Victoria Station (where else?), and to get there by tube, use the Victoria Line, natch.

This stroll is not in Streatham, or even about Streatham, and though we will refer to EVCPs, it will be our inspiration rather than our guide - so you could leave your copy at home. I’ll explain everything during our hour-long train ride, except where our mystery destination is: you'll find that out when we get there next week.

But we need to scope the terrain before we arrive, and we will take our lead from another volume, the one that was the source for Tim Harding’s playful title: Lytton Strachey’s 1918 four biographical studies presented ensemble in Eminent Victorians. 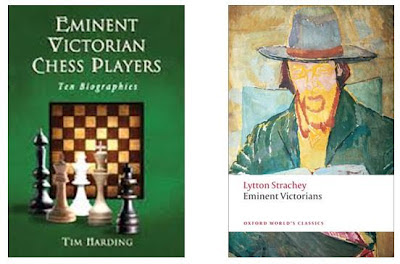 Strachey (1880 – 1932) says that he chose his gang of four “by simple motives of convenience and of art”; his method is to creep up on his subjects unawares, to "row out over the great ocean of material, and lower down into it, here and there, a little bucket, which will bring up to the light of day some characteristic specimen, from those far depths, to be examined with careful curiosity."
Of the creatures under his microscope Florence Nightingale and General Gordon of Khartoum are still household names, but we struggle, 150 years or so after the events, to recognise the other two: Cardinal Manning (1808–1892), and Dr Arnold (1795 – 1842). 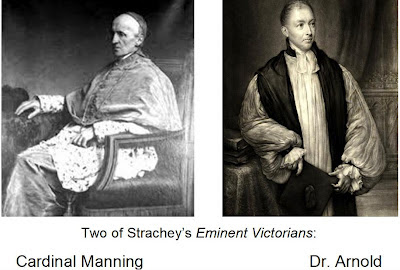 To get to know them let's go back to the 19th Century when organised religion was more entrenched in the corridors of power than today and held sway across all classes. Round here, for example, every Victorian neighbourhood had its own church as standard, and some of them are massive. This airship hangar is in my next street - they wanted it even bigger but ran out of money. 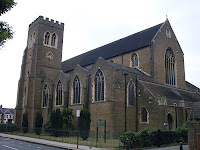 On Sunday mornings it would've been rammed. And Sunday evenings as well.
Henry Manning was a cadaverous figure, and a C of E heavy-hitter (he was Archdeacon of Chichester). He was also High Church and Rome-leaning. In 1851 he followed the logic of his dogma and finally converted to Catholicism. After crossing the floor, and with allies close to the Pope, Manning wasted no time in trampling on some big and incumbent toes in the domestic Catholic church, to manoeuvre his way to become Lord Archbishop of Westminster, and to wield considerable clout in the land - there being, by then, next to no official religious discrimination.
Of course, he had his detractors within his new church and without, and Strachey skewered Manning's scheming piety in the first chapter of EV, not sparing either the complacency and laxity in the established Church of England which the holier-than-thou Cardinal had deserted.
In EVCP Tim Harding also describes the distractions that waylaid the C of E clergy, in particular those chess-playing “Fighting Reverends” of whom, along with Arthur Boland Skipworth (Chapter 5), there were the likes of the Revs. George MacDonnell, John “b6” Owen, Charles Rankin and William Wayte – and many more. And here is Lytton Strachey enjoying himself at the expense of them and their ilk (and it is his dotted pause in the first sentence):

“For many generations the Church of England had slept the sleep of the…comfortable. The sullen murmurings of dissent, the loud battle-cry of Revolution, had hardly disturbed her slumbers. Portly divines subscribed with a sigh or a smile to the Thirty-nine Articles, sank quietly into easy livings, rode gaily to hounds of a morning as gentlemen should, and, as gentlemen should, carried their two bottles of an evening. To be in the Church was in fact simply to pursue one of those professions which Nature and Society had decided were proper to gentlemen and gentlemen alone. The fervours of piety, the zeal of Apostolic charity, the enthusiasm of self-renunciation – these things were all very well in their way – and in their place; but their place certainly was not the Church of England.”

After Manning, a quick look at Dr. Thomas Arnold, Headmaster of Rugby public school who, in order to mould the boys into model Victorians, imposed therein a regime of rigorous Greek and Latin, regular doses of organised sport (including rugby presumably), and compulsory sermons twice a day (weekdays included), enforced by his ruthless Praetorian Guard: the prefects of the Upper Sixth. He, too, was God-ridden, but of a miserabilist Daily Mail-ish stripe.
The other two of Strachey’s four EVs: Florence Nightingale (1820 – 1910), the Lady of the Lamp; and General Gordon (1833 – 1885) are much more familiar, the latter from portrayals of his vainglorious and manipulated heroism, including the film with Charlton Heston taking the spear. Both, F and G, as with Manning and Arnold, were deformed by rampant religiosity (the real target of Strachey's exposé), though both their popular reputations have survived Strachey’s savaging. But in none of the four was it the purpose of his dissection to reveal any latent germ of virtue. 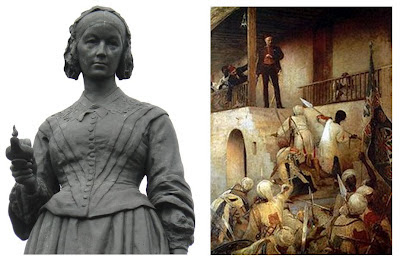 Now - before you ask where this is all heading - with the preliminaries disposed of, we can turn to the simple question that forms the theme of this and the next post, which to readers of the S&BCBlog is surely blindingly obvious, but which Lytton Strachey signally failed to ask: could his four eminent Victorians - Cardinal Manning, Dr Arnold, Florence and the General - also play chess?
And, to pursue the point: if so, might that not merit a mention, a small reference, if not in EV itself, or in EVCPs, then in a paragraph somewhere or the other, in some learned journal, perhaps as a footnote, headed Eminent Victorians Who Also Played A Bit Of Chess?

There now follows my initial conclusions.
First let's look at Cardinal Manning. With high hopes, I might add, as in the chess-in-art world Cardinals resting from their clerical duties in flagrante with the Royal Game are, like their Anglican counterparts Skipworth et al, two a penny. Witness the first of ejh’s Chess in Art series from June 2008, where they appear en masse and more plumped-up than the skeletal Cardy M. 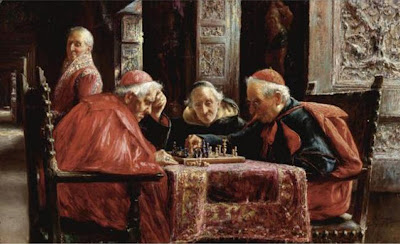 In Eminent Victorians Strachey relates how the exasperated home-turf Catholics (they who had borne the weight of centuries of discrimination and persecution and who, every November 5th since 1605, were obliged to look on, shtum, at the annual roasting, in effigy, of a Papist fanatic - allegedly) complained thus about Harry-cum-lately-Manning, now installed in the precincts of Catholic HQ at Westminster Cathedral, although on an inferior rank and plotting his progress to the eighth: "‘I hate that man,’ one of the Old Catholics exclaimed; ‘he is such a forward piece.’"
'...forward piece...'?! On page 64 of the Penguin Twentieth Century Classics Edition?

It's a chess reference. Here, from E.S.Purcell’s 1896 Life of Cardinal Manning is the passage upon which Strachey relied:

“Speaking of Manning in these early days of his Catholic life...a man of...outspoken stamp, the President of Ushaw [the long established Catholic training college for the priesthood, MS], said: 'I hate that man; he is such a forward piece.'

"To liken Manning to a pawn on the ecclesiastical chess-board, pushing his way through hostile lines to the goal of his desires was, if a rude, not altogether an inaccurate description… of the newly appointed Provost of the Chapter of Westminster. When this sarcasm reached Manning's open ears, as everything of the kind...did...his reply was: 'Poor man...does he suppose in his foolishness...that on becoming a Catholic I should sit in an easy chair and fold my hands all the rest of my life.'"

In his diary Manning let the cat out of the bag confiding that he was “conscious of a desire to be in such a position as...[he] had in times past…” Manning had ambitions, of cathedral-size dimensions.

Without, I hope, offending anyone, I ask: would you slip into the confessional and unburden your deepest and darkest indiscretions and peccadillos to such a man? (Not in a month of Sundays, you wouldn't.) Or, more to the point: play chess with him?
But in fact I could find no concrete reference to Manning blessing the sixty-four squares with his holy presence. So, sadly, we’ll have to settle for him as a peg upon which was hung that nicely turned example of It’s A Game Of Chess Out There, dressed, as it is, in Holy Orders, topped with a biretta, and deemed, quaintly, to be “rude”. As far as I can tell otherwise: he didn't actually play.
I hope that has helped pass the time on the journey thus far, and apologies to ejh as we seem to have strayed into some kind of Literary Reference. We are not there yet, but will arrive at our destination next week, when we’ll complete this Streatham Strolls In The Country.
Acknowledgements, sources etc
EVCPs was published by McFarland this year; £32.50 from Chess and Bridge.
The text of Eminent Victorians (1918) is online in various places including here. It is also available as a Penguin Twentieth Century Classic published in 1986. The text of Purcell's 1896 Life of Cardinal Manning is here. The cover of the OUP edition of EV, with Vanessa Bell's 1913 portrait of Strachey, is used in the illustration above.
Dr. Arnold pic is from here, Cardinal Manning from here
Victoria line is from here, Queen Victoria from here, and Victoria Station from here,
For Florence Nightingale and picture of her statue in Waterloo Place, London see here. George Joy's painting General Gordon's Last Stand (1885) is currently in the Leeds City Art Gallery, according to Wikipedia (from whence came the image).
Mike Fox and Richard James's It's A Game Of Chess Out There is referenced, and explained in the comments, here. See Wednesday's post for another recent example.
Streatham Strolls 1
Streatham Strolls 2
Streatham Strolls 3
Posted by Martin Smith at 11:00 am

What a coincidence. I read Eminent Victorians on holiday this year.