You can be pretty sure that when one of my posts does nothing more than copies the content of somebody else's, I've either found something I really like, or I'm being lazy. Or both. But don't worry about that. Instead, via Mark Weeks, take a look at this chess graffiti: 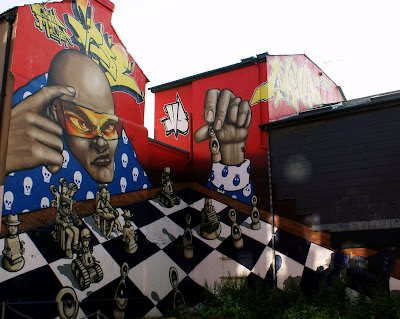 And with more of the surrounding area: 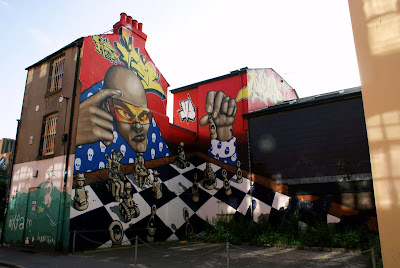 Chess work © Flickr user ohnoitsdaveoh under Creative Commons.
Yes, that's right. Not only is it really rather magnificent, but a white square is in the right-hand corner too.
And take a look at some of the detail: 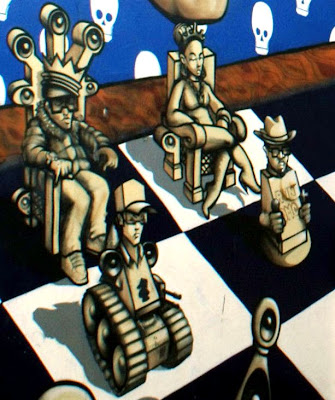 The bishops are from the rap-group Run DMC (the pawns are speakers) but what of the other pieces? I have no idea. Do any of our readers know?
And another intrigue: if you take a look at the much larger original -and I recommend you do- you'll see that at the top the white squiggle is actually a vs, the yellow writing presumably the names of the two players. Indeed, the first yellow word is Grandmaster. Is it possible to identify the two players?
Finally, it turns out that this piece of chess graffiti is actually in Brighton, in the North Laine area. Have any of our readers seen it? Taken other photographs they'd like to share? Or know if on the wall opposite an opponent is painted, waiting eternally for that poised white pawn to land, or at least until his house is demolished, or until the council paints all over his face?
Posted by Tom Chivers at 10:01 am

I hadn't noticed the large original, so I'm glad that you took it a step further. - Mark

Yup I've seen this - came across them by accident when heading back to the station.

Even more impressive in real life.

The perspective illusion is really powerful; the board looks like it is suspended in mid-air! The image must be projected and copied, surely, to get it so accurately around the right-angled walls.

Pretty artistic, too, to group the pieces together for impact - even if chessically it doesn't quite feel right.

Oh, I should have offered to you for the Chess in Art series Martin! I guess I didn't suppose it would qualify...

Oh no, not the "is it art?" chestnut!
I was wondering whether the graffitists ( if that's how we should address them ) would prefer NOT to be thought of, or referred to, as "artists" so as to emphasis their position outside the mainstream. But then hasn't Banksy just opened an exhibition with Bristol City Council?

Yes, but is it art? Or is it just pawnography?

I took a photo of this in Brighton and used it as the homepage photo for the embryonic Facebook group STREATHAM & BRIXTON CHESS CLUB which seems to have gone now. The close-up is mine and the main photo I believe but the one showing extra background is not.

I took a photo of this in Brighton and used in on the embryonic Facebook group page.
The group seems to have disappeared now.