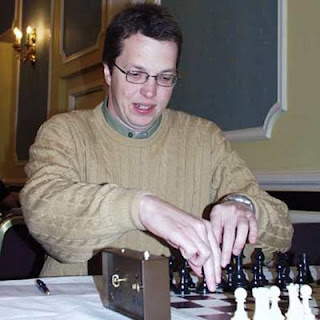 Of which figure in the chess world were the following phrases recently written, relating to their conduct in 1992-3?

If you answered "Nigel Short", perhaps because of the photo above, then nothing could be further from the truth. Instead you should, perhaps, remind yourself of the story about the wit at a dinner, who, on seeing another guest wave his meat in the air while shouting "is this pig?", replied "to which end of the fork do you refer?".

For those who are not yet subscribers to the magazine, Nigel takes us through his victorious Candidates' Final agaist Jan Timman, and among the various clichés that clutter the piece like traffic cones at roadworks (the queen is "the lady", the bishop "the prelate", he sets a "diabolical trap") various personal attacks are made on Mr Kavalek - and others besides.

The content of these attacks are not entirely new, nor their nature. Students - reluctant students, in the main - of Nigel's polemical style are getting pretty much what previously on the syllabus, to wit a string of insults which have the effect, presumably unintended , of inducing the reader to have the maximum possible sympathy for his targets. Jan Timman escapes - on this occasion - with "delusional", Boris Spassky fares a little worse with "notoriously idle" and "pathological indolence" but Kavalek suffers the full force of Nigel's polemical powers, being guilty of "cowardice" and "crippling psychological deficiencies" as well as being "grossly irresponsible".

This pattern has been repeated often enough to bore, rather than annoy: a quick scrawl on the back of an envelope to list previous victims of Nigel's feud-and-insult style came up with Eric Lobron, Richard Furness, Jan Timman, Simen Agdestein, Garry Kasparov, Gerry Walsh and of course the late Tony Miles, a tally which I can't imagine is anything like complete. (The legendary Miles obituary, by the way, is not presently available online*. Not presently.)

As I say, the general effect of this stuff is to nudge the reader's sympathies towards Nigel's opponent: in this instance, perhaps, speculating whether Kavalek's apparently "absconding" for a day may not have been connected to the way Nigel spoke to him, or whether Kavalek's demand to have a contract covering two matches rather than one wasn't actually rather prescient given Nigel's subsequent actions not just towards him but the chess world. But regardless of the rights and wrongs of the issue, the point that most obviously presents itself is that made by Kavalek himself a few years ago:


if he were not satisfied with my coaching after he defeated Anatoly Karpov, he should not have offered me anything. The fact that he did, speaks for itself.

If he were greedy, that is one thing, though not one which Nigel is necessarily in a position to complain about. But if he was also next to useless, why on Earth was he retained, let alone his apparently gargantuan demands accepted? To be fair, Nigel has an answer to this, and to be fairer still, it is one that he has made before. Courageously, he blames his wife.

The reader may, also detect a certain amount of - shall we say - projection in Nigel's psychological dissection of his one-time second, the phrase "he had chosen the most disruptive time to threaten to leave because he simply wanted to screw as much money out of me as possible" being one that brought this particular reader's eyebrows to a raised position. Moreover, commenting on "Karpov's parapsychologist, Zagainov", that "the charlatan was taking Karpov for a ride" may be perfectly reasonable in itself. But to laugh about it, on the grounds that Karpov was being made a fool of, does advertise a certain lack of self-awareness, when the whole thrust of your piece is to show precisely the same process happening at your expense.

Talking of Timman's notes in a previous New In Chess, Nigel claims that they give "a fascinating insight into his psychology": possibly the present article serves much the same purpose as far as Nigel is concerned (though, perhaps, a little less fascinating). 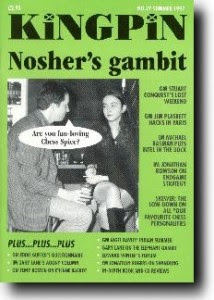 One of the odder, though perhaps more revealing, facets of the piece is Nigel's liking for a certain sexual metaphor: used, perhaps, a little adolescently, giving the reader the impression that the literary effectiveness of the metaphor was less important than the author's keenness to use it. Describing the eleventh game, he refers to a pawn sacrifice he made as "a nervous ejaculatory spasm": this is a strange thing to do, but stranger still is that it is not the first such usage in the piece. Writing - again, of a pawn sacrifice - in the opening game, Nigel says:


Instead of holding the position, as I should have done, I rushed forward in premature ejaculation.

What are we to think about this? Is Nigel trying to tell us something? Perhaps it's best if we don't go there. As Dr Freud never used to say. 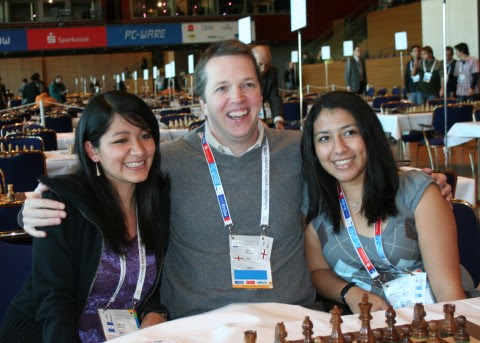 Perhaps it would be better still if Nigel - who is two weeks older than the present writer - shook off some of the more juvenile characteristics of his personality and grew up a bit. If you make it your habit - not just an occasional thing, but a habit - to insult people in order to try and destroy them, the cumulative effect is not at their expense, but at your own. You may or may not diminish their reputations, but you certainly gain one. And not all reputations are worth the gaining.


IT was for this very reason, as I recall, John Nunn's review of The Inner Game included the suggestion that it might be wise for Nosher's future opponents to wear condoms when playing him

Isn't 'wearing a condom' a metaphor for 'playing the Budapest'?

It seems remarkable that New in Chess would publish such an attack without offering a response to Kavalek. Maybe they did and Kavalek wasn't interested in a new war of words.

I almost wrote a letter to NIC I was so annoyed at that article but im too lazy :). Larsen and Kamsky could be added to your list of Short's targets.His anger with Kamsky has some merit but the problems occurred when Kamsky was a child and yet Short continues to attack Gata. How about Topalov who Short had a friendly lunch with every day in San Luis and then publicly accused Topalov of cheating afterwards.

As Kasparov might say, Lets hope Shorts future articles about his opponents are short.

Short publicaly attacking Gata Kamsky for things Kamsky's father did when Kamsky was a child.

In the article Nosher writes of Kavalek going AWOL in the middle of the match with Timman.

What's odd is that in The Inner Game - which contains quite a bit of Kavalek bashing from Lawson - it doesn't get a mention at all.

Incidentally Dominic Lawson has returned to chess and will probably be around 200 on the next ECF list.

That's actually quite interesting - where does he play?

He plays for Lewes Chess Club.

Scroll down slightly or click on 'Results' at the top.

Sussex somewhere. I think Peter Kemp played him not so long ago.

Lawson's even worse than Nigel: just as objectionable but with added piety.

The other things about the Lubosh-goes-walkabout story is that surely it would have provided an ideal opportunity to sack the greedy waster without paying him a further penny?

I don't think Nigel makes things up, as it happens, that's not his style at all, but the way he writes about things does have the definite effect of making one think "what really happened there then? What's the other side of the story?"

Yes I didn't mean to imply that it was made up - just odd that it had been left out of the earlier book.

I think the reason for that was that "The Inner Game" was a rush job bundled out asap after the end of the Kasparov match - little more than a week IIRC.

Probably the pre-match parts of the book were set in stone and only the account of the match was to be added. At the start of the match it presumably wasn't clear that Kavalek was going to get the boot and therefore the walk-out wouldn't have been something they'd want to make public.

I hadn't realised that Chandler was among Short's victims.