Guest post by Martin Smith
Charles Bargue's 1882 game on a park bench in Chess in Art VI was a reminder what a delicious pleasure it is to savour chess, like strawberries, en plein air; especially when you put on your best bib and tucker and find a nice corner for the occasion. Somewhere in Paris would do, and the Jardin de Luxembourg (le "Luco" to the locals) is parfait.

These days the dress code is mercifully more relaxed than in Bargue's painting. Though eye-catching, a pink frock coat is no longer de rigueur, but red sleeves still cut a dash: 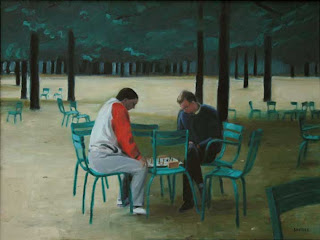 Nick Savides (1988)
Chess players (in Paris)
Nick Savides' sylvan scene is unmistakeably le Luco. There are the famous green chairs; the ranks of trees stumbling in cracked earth ringed by the flat horizon only (see Note 1); the sheltering sky of foliage blanking the fractious Metropole beyond. The picture intrudes on players oblivious in the privacy of their game. The public park is deserted and empty. Everyone has long gone, leaving behind their eloquent verdict on the opening moves: 1. e4 e6 (très bien) 2. d4 d5 3. exd5 exd5 (zut alors! the Exchange Variation ...yawn...où est le pub).

Editing people out is fair enough for a study of the loneliness of the long-suffering chess player, but as any habitué of le Luco knows: you may go there on your own, but you won't stay there alone for long. This is what chess is really like in le Luco... 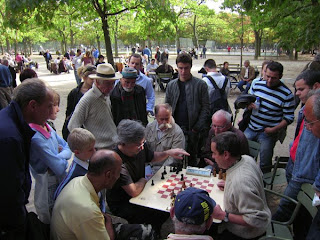 See Note 2
...even on a quiet day: players, kibitzers, and green chairs as far as the eye can see. It is spectator sport – even in the endgame – with full-on dressed-down audience participation.

You could sympathise with Nick Savides for not attempting to capture such a busy scene with his brush, especially as they're playing three-minute blitz, and in his own slowplay-game-picture he put in the bare minimum of two characters. Contrast with Samuel John Peploe who, turning his attention to the more decorative areas of the Jardin, dashed this off in 1910... 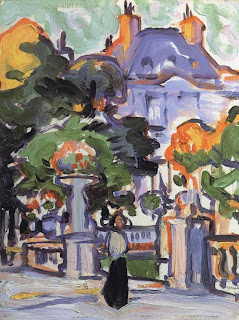 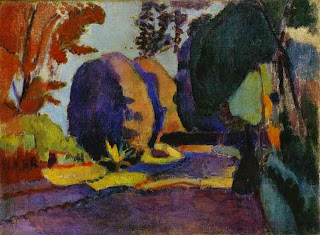 Le Luco by Matisse
...who stripped out everyone so as to concentrate on the, err, path.

These two works make an interesting pair for their emphatic colour. In 1901 Matisse was en route to the high octane chromatics of Fauvism five or six years later. By then Peploe and his friends from Edinburgh were heading for France where they set up studios close to the Jardin, had great craic in the cafés of Montparnasse, and absorbed the discoveries of the "Wild Beasts". The Scottish Colourists had arrived (Note 3) to be known affectionately on the boulevards as the MacFauvists or the Wee Wild Beasties, I shouldn't wonder.

You don't have to go to Paris to visit the Luxemburg (sic) Gardens. There is a street of that name in Brook Green, a pleasant purlieu of West London. Amos Burn (1848–1925) "arguably England's strongest player between Staunton and Short" once lived there at Number 19 (Note 4). He produced what Tim Krabbé rates as one of the ten most fantastic moves ever played - blimey - as black in an "off-hand game" - hmmm - in Liverpool, in 1900, against a Mr. MacDonald. If you’ve not done so before, see how Burn had big Mac for breakfast.

MacDonald-Burn, Liverpool 1900. Off-hand game.
Black to play "one of the ten most fantastic moves ever".
See Note 5 for solution and commentary.
[Chess in Art index]
[Chess in Art collected]

1. That's a rip-off from T.S.Eliot's "The Waste Land". He was at the Sorbonne in 1910 just round the corner from the Jardin, though I'm not suggesting for a moment that le Luco was his inspiration. He wrote it in 1922. Trivia point: Part II of the work is titled A Game of Chess.

2. The photo comes from here: it's so much better than any of my rubbish snaps. The chess table is one of several provided by Le Sénat who run the Jardin.

The info about Burns living in London comes from Edward Winter.

Fine pictures & commentary as ever. But one minor correction (kind of, to Winter!). Amos Burn did move to London late in his career, but he spent by far the greater part of his life in Liverpool, having moved there in infancy from Hull. He lived initially in Breck Road near Anfield football ground before moving to more comfortable surroundings in Oxton, then Hoylake, on the Wirral. He was an accountant working in Dale St in the business centre of late 19th century/early 20th century Liverpool. I mention this because it explains why Burn's "Immortal" was played in the city. Also, to correct the impression given, I recall, by Wikipedia that Burn was a London-based player. (source: Forster's biog of Burn)

As another Postscript to the Postscript let me mention also that I've spotted that, according to Hilary Spurling's biography of Matisse (the recent one volume edition), his wife Amelie said that "the so-called Luxembourg Gardens" picture was painted in the grounds of the Chateau of Vives-Eaux near Fontainebleau away from Paris. This was owned by the Humberts, to whom her parents were connected, and to whom considerable scandal attached. I'm guessing that Henri Matisse, or his dealer, thought it would therefore be savvy to disguise the painting's real subject.

What's the French for...

"What's the French for...
"Actually it's very interesting"?"

- the same as the French for "you must be joking".