Ray Keene, whatever else he may be, is, by common consent, a charming man. The same is not true of his sidekick: or, to be more accurate, one of them, since there are several. But the particular sidekick who is the subject of today's piece is the brutish Eric Schiller, author of many unremarkable chess books - but, last week, author of a remarkable outburst on Ray's Chessgames page.

The subjects of Wikipedia and Private Eye had come up, with Ray having made some interesting remarks about both. Nothing hostile, though, nothing one could describe as menacing. But, standing at his boss's right hand, "Hard" Eric was not so restrained. It was blatant disrespect, and he wasn't having it. So he told them. He gave them what for. He threatened, - in pretty much so many words - to tear the miscreants a new anus. (Click on image to enlarge.) 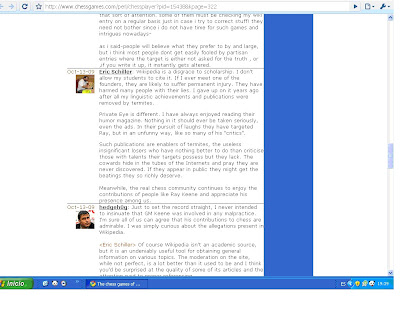 Wikipedia is a disgrace to scholarship. I don't allow my students to cite it. If I ever meet one of the founders, they are likely to suffer permanent injury.

The founders of Wikipedia were Jimmy Wales and Larry Sanger: whether they would appreciate being the subject of physical threats from Eric Schiller is an interesting question. While we ponder it, Hard moves on to Private Eye:

Private Eye is different. I have always enjoyed reading their humor magazine. Nothing in it should ever be taken seriously, even the ads. In their pursuit of laughs they have targeted Ray, but in an unfunny way, like so many of his "critics".

Such publications are enablers of termites

Mmmm, termites again. But do go on...

the useless insignificant losers who have nothing better to do than criticise those with talents their targets possess but they lack. The cowards hide in the tubes of the Internets and pray they are never discovered. If they appear in public they might get the beatings they so richly deserve.

It's not quite clear to me who Hard is threatening here, as he's not quite so specific as before (and to be honest, specifics never were his strong point). Private Eye? Probably not. But he writes of "publications" - so does he mean Kingpin? Or maybe "useless insignificant losers" is a clue - perhaps he means us? Presumably not, deadly accurate though the description would be.

Meanwhile, the real chess community continues to enjoy the contributions of people like Ray Keene and appreciate his presence among us.

Well, I'm sure we can all agree with that at least. I enjoy Ray's Chessgames page immensely. Nevertheless, there are some questions that come to mind about Hard's comments.

One is, when Hard talks about "scholarship", did he have himself in mind?

A second is, why is Hard bothering to threaten people who are, by his own description, insignificant?

A third might be why, given that according to its guidelines

Chessgames.com reserves the right to delete messages that are deemed inappropriate, distasteful, or off-topic

and given that Ray has the power of deletion on his own page, does he consider Hard's comments neither distasteful enough nor inappropriate enough (and nor for that matter, embarrassing enough) to be deleted?
Posted by ejh at 8:30 am

Schiller may well have a point re: whether or not Wikipedia can be considered a rigorous source (i.e. obviously not) but perhaps he's not best placed to make it.

Frankly, I'm rather surprised that the fact that any academic has to state explicitly that he does not allow students to cite wiki ... I would have thought that would go without saying. Mind you I was also surprised that anybody finds the need to warn journalists that they should approach wiki "with caution" (here). Obviously they do though - only this weekened I was listening to radio 4 and the presenter rather proudly informed the interviewee that he'd researched their life by looking him up on wikipedia.

Such is modern life I suppose.


Btw: what's internets plural all about?

Or to continue the theme as a certain M. Jackson once nearly sang

On citing Wikipedia: if as an academic you ban citation of Wikipedia, you're encouraging a kind of dishonesty in your students.

Suppose you're a student and you're writing a paper on some esoteric subject. You look it up in Wikipedia and find a succinct explanation and some references to the academic literature. Mindful of your professor's ban on citing Wikipedia, you omit to mention that you did this, and cite instead the references given to you by Wikipedia.

Is this kind of behaviour (deliberate omission of actual citations consulted) really something that you want to encourage in your students? It's a pretty minor form of academic dishonesty, but still.

Is this kind of behaviour (deliberate omission of actual citations consulted) really something that you want to encourage in your students?

I'd want my students to actually follow the references given - to find out whether wikipedia's summary is reasonable (possible) or not (also possible).

I don't consider failure to cite sources, or citing sources you have not in fact consulted, as minor dishonesty btw.

Although I would agree with Schiller on Wikipedia as a source I perhaps should make clear that in contrast to Eric I don't think that means it doesn't have value.

I'd wonder whether the advice that academics give to students about sources usually involves threatening to give a kicking to the authors of unreliable ones.

I'd note though that one thing which all academics must advise their students is that plagiarism is an offence which will have them instantly thrown off their course and out of college. I have no doubt that Schiller instructs his students to this effect.

....plagiarism is an offence which will have them instantly thrown off their course and out of college....

Alas it probably wouldn't. I'm sure ES gives a warning though - or at least works in a department where such warnings are given out.

At the LSE the plagiarism warning was in the course handbook. Now I think about it one lecturer did warn us against using wiki as a source.