It seems, I learn from this thread over at the EC Forum, that we will soon be getting some chess on the BBC. The programme will be aimed at novice players – "... people who know the rules of chess (not absolute beginners), but haven't really played much and could benefit from simple advice and tips...." according to the programme maker – and be broadcast on BBC4 sometime in December.

Chess on TV is, needless to say, a very blogable subject, and it will no doubt get a post here at some point in the near future, but for today I want to follow the EC Forum thread which, as internet discussions tend to do, has wandered off onto a different topic altogether – the chess skills of S&BC blog favourite Raymond Keene.

For some reason which I can't quite fathom, youngsters who only know RDK as a writer and journalist sometimes doubt whether Ray is or was a strong player.

Indeed so, John. Indeed so. 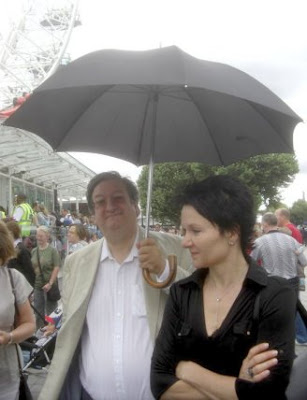 Ray Keene ... ever the gentleman

RDK, it should not be forgotten, was England’s second GM and was close enough to being the first that he and Tony Miles were formally awarded the title together at the 1976 Haifa Olympiad. It might also be said that his rating (2455 when he stopped playing but 2500+ at various times in the 1970s and 1980s) was achieved at a time before inflation drove ELOs upwards. In fact back at the EC Forum Kevin Thurlow did say exactly that but while I have every sympathy with this view I must say I find equally persuasive Keith Arkell’s suggestion that standards have risen in the last two or three decades and therefore a 2400+ now is better than a 2400+ back then. The conflict reflects the inherent problem of trying to compare ratings of players from different eras I suppose.

Judging talent based on achievements is an essentially error prone activity given that accomplishments are a function of opportunities as much as ability. The chess world now, after all, is a very different place than the one the active Raymondo inhabited. He was 19 before he played his his first international tournament (Hastings 1966/67), and prior to this he’d played a grand total of one Grandmaster (O’Kelly at Bognor Regis in 1965). Compare that to the beginnings of a modern player's chess career.

Take Magnus Carlsen, currently busy cracking skulls in Nanjing, for example. While Mondo didn’t get to go abroad to play an all-play-all tournament until he was well into his twenties, Magnus, who won't leave 18 behind until the end of next month, has probably already taken part in more such events than Keene and his cohort (Hartson, Basman, Whiteley et al) got to play in their entire careers.

Ray's still got it

I'm sure Keene's talent would have taken him further had he been playing in modern times. Not as far as the Norweigen Future World Champion no doubt but beyond what he was able to achieve in his own era.

I suppose judgements of that nature are always going to be debatable but whether it's true or not, I still find it astounding that in the third round of that Hastings tournament Keene managed to take down none other than the patriarch of Soviet chess Mihail Botvinnik. True he would later describe it modestly as a “rotten win” and “nonsense [which] deserved to be hissed rather than clapped”, but there’s no denying the sporting significance of the clash. The game was played just three years after Botvinnik had lost his crown to Petrosian and only two British players - Sir George Thomas and C. H. O’D. Alexander - had previously beaten the Russian. Ritson Morry justifiably described Ray’s victory as, “the sensation of the tournament”.

There can’t be that many English chess players who have beaten a former World Champion but the number who have also drawn with a reigning Champion must be even fewer.

Keene got his half-point as Black against Karpov in Bad Lauterberg in 1977. Once more our hero was under pressure for much of the game and even managed to get into time trouble twice in the one session. The time control was 40 moves in two and a half hours followed by 16 moves in an hour as was standard in those days but Karpov played at such speed that they managed to fit all of the game's 57 moves into a single five-hour sitting. When the session was over RDK had used 210 minutes to Karpov’s 90 but, zeitnot or no zeitnot, they split the point after Keene found a neat piece sacrifice to save the day.

If neither of these games are examples of Ray’s best chess - examples of which, with annotations from the man himself, can be found on this very blog here and here – there is no doubt they are the high-water mark of his competitive achievements. There are many things that can be said about Raymond Keene but the suggestion that he was no good at chess is not one of them.

For sure Raymondo is now super-GM class in terms of getting himself at the centre of any appearance of chess in the media, and it was his appearance on the forthcoming BBC programme that sparked for this whole discussion in the first place, but that should not blind us to the fact that Ray could most definitely play.

A candidate for RDK's "best ever" might be his (White) win v Kovacevic at the 1973 IBM tourney. It was one of those picked by Jon Speelman for his excellent "Best Games 1970-80" collection a scarily long time ago!

As you say we have been discussing this "in another place", but I am not sure Keene *was* that underestimated as a player in his 1970s pomp. I wouldn't be surprised if his strength started getting downgraded at the same time he started mass producing "cheap 'n' cheerful" chess books (save that they weren't always in reality *that* cheap, of course :-))

BTW I know Sir George Thomas had beaten Capa (and with Black!!) but didn't know of a win v MMB - when was this?

I got that snippet from Ritson Morry's BCM report of the tournament (I think). I'll double check and get back to you.

In Ray Keene's excellent book, Becoming a Grandmaster (referring to his game with Botvinnik) he says
"I appeared for this game wearing a dinner-jacket and black elasticated bow tie". I wonder what he looked like ? (And did this distract Botman)
Joe S

You say 'there can't be that many English players who have beaten an ex world champion'. I believe Streatham & Brixton's own John Bennett once beat Tal. I've never seen the game but would be interested to if anyone can trace it.

In a simul I presume you mean Martin? Still a fine achievement of course

Not a simul? Wow!