This is the end VII 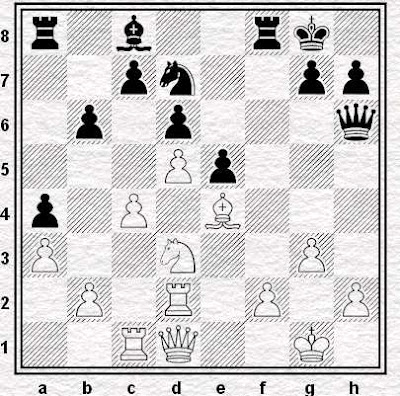 I'll be on a train to Gatwick later today, another weekend of e2-e4 chess ahead of me. Sunningdale already seems like ancient history, and chuffed though I was to win my first tournament in twelve years (and only the second ever), this is no time to rest on my laurel. There won't be much time to relax after Gatwick either, as I'm heading off to Benasque for the first half of July.

All this chessing is really getting in the way of blogging. I want to write a post or two about my Sunningdale experiences and I've already got posts in several series - Letter to the Editor (I, II, III); Sing a Song of Chess (I, II, III, IV); The Interesting Sacrificed Exchange (I, II, III, IV) - that are waiting to be written. As well as that lot, I really must get back to the Anti Chess (I, II) story sometime soon. Chess blogging zeitnot!

Something else I must get around to is that review of Nick Pert's Killer Endgames DVDs. My plan is to do something in depth on Disc One at some point between Gatwick and Benasque. For today, though, I'll kill two birds with one stone and take a look at how the Ginger GM's DVDs helped me win an important game at Sunningdale. 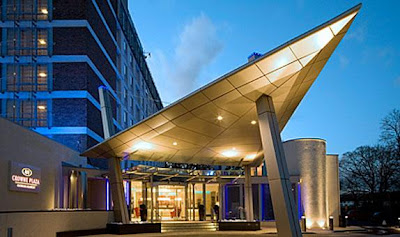 It was the morning round of the last day.  We had reached the position at the head of today's blog when, just as I was about to play my original intention (the simple ... Nf6 followed by lobbing my pieces in the general direction of White's king), a thought occurred to me: what about ... Nc5?  My silicon friend doesn't think much of the idea - after a couple of minutes to think, the BIM considers Black to be clearly better after ... Nf6 while ... Nc5 is only it's twelfth choice (behind such moves as ... Re8, ... Rd8, ... Ra6 and ... Ra7) - but nevertheless there's a rather attractive idea behind it.  "White will have to swap", I thought. "I'll take back with the b-pawn, exchange everything off except for one rook, stick that on b3 and then just sit on White's position until it breaks."

A Blue or Red Pill? moment, then. Play for a direct attack or head for an endgame? Frankly, I found it very difficult to make the choice, but in the end, three factors tipped the balance in favour of trying ... Nc5: the Killer Endgames preview clip that we had on the blog last week (TITE VI), the memory of a game I played at Golders Green back in January and the amount of time we each had left on the clock. 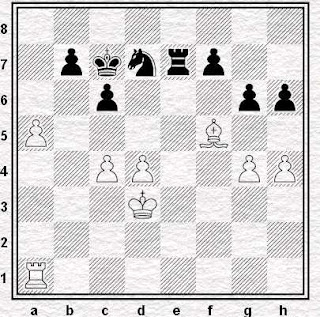 If you watched the Killer Endgames preview video you will probably remember this position. I hadn't seen the whole DVD before I went to Sunningdale, but, fortunately for me, I had at least seen the this clip.  It seemed to me that there was a similarity between what I wanted to do and Karpov playing 1 Bxd7 followed by moving his rook to the f-file and eventually to f6. True, unlike Karpov, I wasn't going to be trying to create a passed pawn, but I was going to get an active rook while my opponent's rook was going to be stuck passively defending a pawn just like Hort's was.

If you watch the video again, you'll notice how often Pert talks about the importance of having active pieces in rook endgames. This is hardly an original observation, of course, but it's an important one and in retrospect given the emphasis he puts on this point, it's not really surprising that the thought should come to mind at the point that it might prove useful. 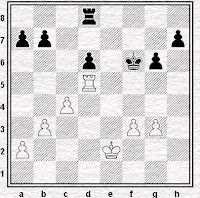 Once I'd begun thinking about active rooks another position came to mind: one from a rapidplay game from January's Golders Green tournament. My opponent, playing Black, had offered me a draw, but I declined because I could see several factors in the position that were in my favour, not least the relative activity of the rooks. I did indeed go on to win the game, but it was more my opponent's reaction afterwards - as soon as he resigned he announced that the diagram position is a simple draw - than the result that encouraged me to play ... Nc5 in the game at Sunningdale.

My feeling, you see, was that regardless what an objective assessment of the position might be, my chances of winning were pretty good and that weaker players, by which I mean people around my strength, often underestimate the difficulties of holding such positions. Sitting at the board in Sunningdale I remembered Golders Green and felt that if my opponent there had allowed me to get such an ending and then not manage to save it something very similar could well happen again.

Finally, there was the clock; the thirty-third piece, as T.C. calls it. At the point I was deciding between ... Nc5 and ... Nf6 my opponent was already down to his last thirty minutes while I had a little short of twice that. I felt that even if he managed to reach a defendable position, the pressure of having to find a decent move once every thirty seconds (the time control at e2e4 events is all moves in 90 minutes with a 30 second increment from move 1) would eventually tell and sooner or later he would crack.

That's how I saw it anyway. So I chose ... Nc5 - my scoresheet tells me the decision only took four minutes which doesn't really seem enough - and ten moves later we arrived here ... 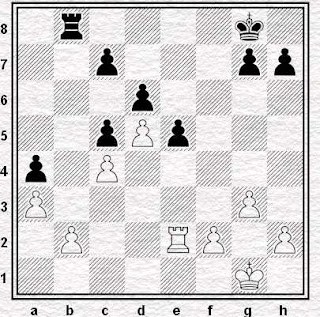 ... and I went on to win the game in pretty much exactly the way that I'd imagined at move 23. I was even right about White's time trouble: at one stage just before the end he had seven seconds left to my three-quarters of an hour.

During the game I wasn't too bothered whether heading for an endgame was the correct thing to do or not. I was just trying to win and the rook ending seemed like a pretty good way to try to do that, while minimising my chances of losing.

As things turned out, I clearly made the right choice. In retrospect, though, I have more doubts as to whether it was, objectively speaking, the best choice. After all, I hadn't put any thought into how I'd swap the pieces off, I just kind of assumed that I'd be able to. Looking at the game again, White was rather compliant around moves 27 to 32. Had he tried to keep some bits on, the game the end of the game could have been very different.

Opinions as to what you would have done in the original position, and perhaps how White might have defended the ending better, are welcome in the comments box. They'll be too late to help me for Gatwick, but they could well help me at Benasque.

Anyhoo, it's time I caught that train. See you Monday.

This is the End Index
Posted by Jonathan B at 8:00 am

If the comments of engines are helpful, it's useful to go through such a game move by move. In the first position from Sunningdale, the engines ,as you suggest, don't rate the endgame. You can interpret perhaps that they have every confidence in being able to hold the endings. In the second position Sunningdale, they interpret the position as becoming unpleasant for White but not necessarily losing. It's difficult to think clearly in that type of position particularly when running short of time. There's the weak squares on b3 and f3 and some of the King and Pawn endings could be worrying because the Black King might invade. The solution is probably going to have to be to sacrifice a pawn for activity and a hopefully drawn R+P a pawn down, but it's not obvious quite how. A try of f4 to enable Re7 seems to allow Black to hoover more pawns than White.

In the rapid game with the pawn on d6, didn't anyone remind your opponent of the problems of having a backward d pawn? Without extensive analysis, it's difficult to say whether the position is lost. Again it will be probably be necessary to sacrifice a pawn at some stage for activity. So by no means drawn and no reason for White to take a draw unless he had a time or serious rating disadvantage.

Sorry to say that, but it seems to me that Nc5 is a bad strategical mistake. After the immediate Nxc5 bxc5 White should play b4!, after which the queenside will be resolved very much in White's favour. Black will have to count on holding his strategically suspect position. While after Nf6 White's position has no point, and Black should be happy.

I don't think that an immediate b4 is possible because after .. axb3 ep, Qxb3 isn't possible because the d2 Rook is hanging to the Queen on h6. The next move pair were Qc2 and Qh5, so it would then have been possible.

This is presumably where White went wrong then, he should have been trying to play b4.

often underestimate the difficulties of holding such positions

God, yes. A lot of players will just happily swap off everything that's offered in order to get to a position they reckon is drawn, but is in fact either lost or really difficult to draw.

One common theme is people swapping off down to bad bishop against knight, which always puzzles me since one piece of endgame knowledge we all acquire quite early on is the thing about bad bishops. But people just go ahead and do it all the same.

I agree that Nf6 does seem logical though. With the cramping pawn on a4 ready to give white a weak a pawn, should he ever play b4, white doesn't have any obvious pawnbreaks. Having weakened the light squares around his King with g3, white would have to consider black's bishop coming to h3 or g4. In conjunction with black's aggressively plonked queen, the knight ready to hop to g4 and the semi-open f-file, black seems to be all ready to go on the kingside. Presumably, white would try to enforce some simplification with f4 while retaining light-squared bishops, but Nf6 looks very logical to me. Maybe Nc5 is ok, but it doesn't seem to fit in with the rest of black's position aimed at the kingside.

Nc5 is what I first saw, but not playing it out to an endgame I can't say for sure whether it was better than Nf6. Perhaps it's a matter of choice, since both seem to be good. Black is more active, and should be able to pressure for the win, while white is on the defensive. Great question, though, and one to give more thought to.