A Literary Reference : The Dream Of Macsen Wledig 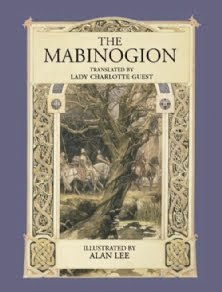 And he saw a dream. And this is the dream that he saw. He was journeying along the valley of the river towards its source; and he came to the highest mountain in the world. And he thought that the mountain was as high as the sky; and when he came over the mountain, it seemed to him that he went through the fairest and most level regions that man ever yet beheld, on the other side of the mountain. And he saw large and mighty rivers descending from the mountain to the sea, and towards the mouths of the rivers he proceeded. And as he journeyed thus, he came to the mouth of the largest river ever seen. And he beheld a great city at the entrance of the river, and a vast castle in the city, and he saw many high towers of various colours in the castle. And he saw a fleet at the mouth of the river, the largest ever seen. And he saw one ship among the fleet; larger was it by far, and fairer than all the others. Of such part of the ship as he could see above the water, one plank was gilded and the other silvered over. He saw a bridge of the bone of a whale from the ship to the land, and he thought that he went along the bridge, and came into the ship. And a sail was hoisted on the ship, and along the sea and the ocean was it borne.

Then it seemed that he came to the fairest island in the whole world, and he traversed the island from sea to sea, even to the furthest shore of the island. Valleys he saw, and steeps, and rocks of wondrous height, and rugged precipices. Never yet saw he the like. And thence he beheld an island in the sea, facing this rugged land. And between him and this island was a country of which the plain was as large as the sea, the mountain as vast as the wood. And from the mountain he saw a river that flowed through the land and fell into the sea. And at the mouth of the river he beheld a castle, the fairest that man ever saw, and the gate of the castle was open, and he went into the castle. And in the castle he saw a fair hall, of which the roof seemed to be all gold, the walls of the hall seemed to be entirely of glittering precious gems, the doors all seemed to be of gold. Golden seats he saw in the hall, and silver tables. And on a seat opposite to him he beheld two auburn-haired youths playing at chess. He saw a silver board for the chess, and golden pieces thereon. The garments of the youths were of jet-black satin, and chaplets of ruddy gold bound their hair, whereon were sparkling jewels of great price, rubies, and gems, alternately with imperial stones. Buskins of new Cordovan leather on their feet, fastened by slides of red gold.

And beside a pillar in the hall he saw a hoary-headed man, in a chair of ivory, with the figures of two eagles of ruddy gold thereon. Bracelets of gold were upon his arms, and many rings were on his hands, and a golden torque about his neck; and his hair was bound with a golden diadem. He was of powerful aspect. A chessboard of gold was before him, and a rod of gold, and a steel file in his hand. And he was carving out chessmen.

And he saw a maiden sitting before him in a chair of ruddy gold. Not more easy than to gaze upon the sun when brightest, was it to look upon her by reason of her beauty. A vest of white silk was upon the maiden, with clasps of red gold at the breast; and a surcoat of gold tissue upon her, and a frontlet of red gold upon her head, and rubies and gems were in the frontlet, alternating with pearls and imperial stones. And a girdle of ruddy gold was around her. She was the fairest sight that man ever beheld.

And they went along the mouths of the rivers, until they came to the mighty river which they saw flowing to the sea, and the vast city, and the many-coloured high towers in the castle. They saw the largest fleet in the world, in the harbour of the river, and one ship that was larger than any of the others. "Behold again," said they, "the dream that our master saw." And in the great ship they crossed the sea, and came to the Island of Britain. And they traversed the island until they came to Snowdon. "Behold," said they, "the rugged land that our master saw." And they went forward until they saw Anglesey before them, and until they saw Arvon likewise. "Behold," said they, "the land our master saw in his sleep." And they saw Aber Sain, and a castle at the mouth of the river. The portal of the castle saw they open, and into the castle they went, and they saw a hall in the castle. Then said they, "Behold, the hall which he saw in his sleep." They went into the hall, and they beheld two youths playing at chess on the golden bench. And they beheld the hoary-headed man beside the pillar, in the ivory chair, carving chessmen. And they beheld the maiden sitting on a chair of ruddy gold.

And immediately the emperor set forth with his army. And these men were his guides. Towards the Island of Britain they went over the sea and the deep. And he conquered the Island from Beli the son of Manogan, and his sons, and drove them to the sea, and went forward even unto Arvon. And the emperor knew the land when he saw it. And when he beheld the castle of Aber Sain, "Look yonder," said he, "there is the castle wherein I saw the damsel whom I best love." And he went forward into the castle and into the hall, and there he saw Kynan the son of Eudav, and Adeon the son of Eudav, playing at chess. And he saw Eudav the son of Caradawc, sitting on a chair of ivory carving chessmen. And the maiden whom he had beheld in his sleep, he saw sitting on a chair of gold. "Empress of Rome," said he, "all hail!" And the emperor threw his arms about her neck; and that night she became his bride.

from The Dream Of Macsen Wledig, as collected in The Mabinogion and translated by Lady Charlotte Guest.

Wikipedia gives the life time of Macsen Wledig as 'ca. 335 – August 28, 388', which predates the accepted origin of chess at around 600 AD. It looks like the name of the game was mistranslated. - Mark

Now isn't that an interesting point? I should probably bring that up with some Mabinogion expert...