Not so simply the best

I've been looking forward to Larry Kaufman's new repertoire book, which according to the rumours I'd read, he's been putting together. His previous one, The Chess Advantage In Black And White (Random House, 2004) is as good a repertoire book as I've seen: my copy is getting as dog-eared as a good book can expect to be. 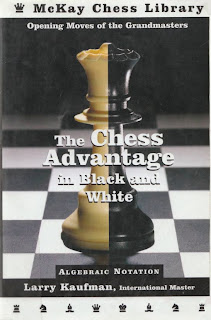 So I was pleased to see that The Kaufman Repertoire For Black And White is due out early year, published by New In Chess. 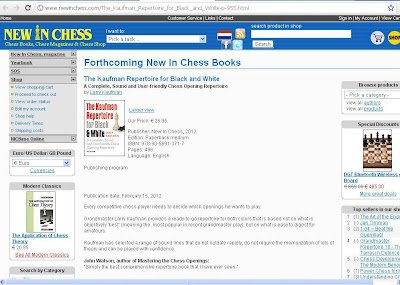 I was also pleased to see that according to John Watson, that most respected of chess book reviewers, the new book appears to be every bit as good as the old one. Better, in fact: it's "simply the best comprehensive repertoire book I have ever seen".

Hurrah! I almost ordered it on the spot, such is Watson's enthusiasm: enthusiasm all the more impressive, given that it appears to be in praise of a book that has not actually been published. Though it's not unusual for review copies to be made available in advance of official publication.

However, the advert gives no source for Mr Watson's brief encomium, other than the author's name. One trusts that this reticence is not because, on investigation, the quote (a slight misquote, as it happens) turns out to be from a review written some years ago, and describes not the forthcoming work - but the book that came out in 2004.

Not that you'd know that, from the ad.

[Book Reviews by John Watson]
Posted by ejh at 7:55 am

I've read that the new book is a 2nd (updated) edition of the previous one, albeit renamed, so presumably the publisher felt somewhat justified in using the review quote for the first edition. I prefer the original name, personally.

My preferred explanation is incompetence, since if this

is what they actually did, and hence deliberately rather than inadvertently, then that's something you really can't do, because it's deliberately misleading.

I mean why not say that the comment is "on the first edition", or some similar phrase? There's no good reason for leaving it out.

Amazon seem to do that - say something like "this is a review of the xth edition" or what have you.

It would be absolutely standard and normal in any branch of book publishing. Chess, however....

Having a chess publisher be deliberately misleading with their advertisements and quotes before a book comes out? There's about as much chance of that happening as having another type of book publisher do that, I'd say.

Slightly off topic, but don't you love reading those Amazon.com reviews from readers that appear on a book's webpage before the book in question actually is published? Those type of reviews also all tend to be rather positive, for some reason.

It can't compare to ChessBase's recent effort - publishing a review of their new Android app without revealing that the reviewer is one of the two authors of their English language web page!