The Other Talent of Philip Poyser

Chess-playing-artists; artists-who-play-chess. There's a good few of them. Richard James and Mike Fox listed some in their Addicts books, where they created a six board Artists' chess team (and other teams besides).
This is not about chessers who merely doodle or, to flip it over, artists whose first move is with their rook’s pawn. It is about artists who feel compelled to create serious artworks and who are also driven to play proper chess (and that's not as in the back of the team captain’s car, obviously). Or the other way round. Marcel Duchamp was the grandaddy of them all, but he has had his fifteen minutes of fame, and then some, so let’s have a look at a hitherto unsung chess-artist: Philip Poyser (1912 - 1988).
This note about him is an unexpected spin-off from our Asylum series: he was a sometime team captain for Richmond and Twickenham Chess Club, in particular when they played Broadmoor CC in the early seventies. Richard James has commented about him on the ECF, and its time we looked at his art.
But first a bit of his chess. Richard James knew him of course, and reckons he was about 140ish strength: so a middling club player. Here is one of his games, in which he pulls off an appropriately aesthetic finish.

Phil didn't hit the big time chess-wise. Nor did he as an artist, but he was a very able one, dedicated to his métier. His work crops up now and then at auction, and so some of it is on-line, though seldom given a date. Although it is a limited selection of his work, it says a lot about Philip Poyser the chess playing artist.

He used watercolour and oils, was accomplished in both, and his most effective pictures show an eye for atmosphere and light. Take this simple watercolour, for example, suggesting that apart from his art he had other ways of supplementing his income.... 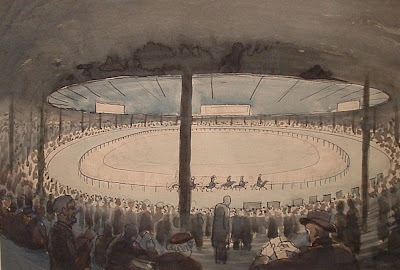 It was probably blocked in on the spot to fix the hard electric glare. Watercolour is often said to be a fickle medium, as you can see where it has blotched above the canopy. But it is portable, fast and unobtrusive. You can imagine Phil perching up at the back, washing in the colour.
Colour? It’s just brown and blue washes on tinted paper. But it works – it evokes at one and the same time the bleach of the arc-lights, and the uniformity of their garb. Yet, in spite of the drab there is the spark of character as the bloke marks his card.

Which dog track was it? Wimbledon Stadium – not far from Richmond - is still there, with floodlighting, though more often these days it is bashed-in stock cars that tear up the track. But, apparently, as recently as 1955 there was yet another stadium two miles north in Wandsworth Town. The cloth-cap dog racing culture was captured in a pavement level observation by Carel Weight. However, here there are no floodlights, so they stream home before the sun sets. Perhaps then, Phil was in Wimbledon Stadium after all.

Phil Poyser's touch with atmospheric watercolour is also shown off nicely in this next delicate winter scene. It was up for auction in 2009 when it was titled "Chinese Tower Amongst Woodland". But is very recognisably the pagoda at Kew Gardens, Richmond upon Thames, snowbound in a veiled winter luminescence. This next one may have been unkindly treated by time, and the internet, as it is difficult to see the detail. But it looks like another on the spot sketch and may have just been a study for a studio piece. Using tinted paper again, he evokes a glowing summer's day. 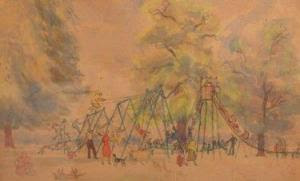 Figures In A Busy Children's Playground.
Ink and watercolour.

There's a thread linking this to the dog-track punters above, and the skaters to come below: they are all local scenes of ordinary people off-duty, relaxing, and doing it together : it's workers' playtime.

Phil's other medium of choice was oils. 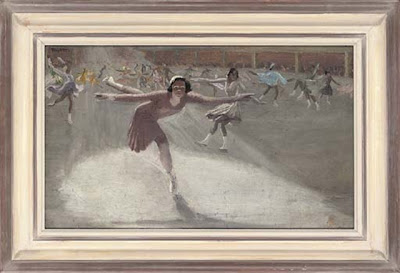 Here he works up an image with greater impact. You can see again his fascination with artificial light, as well as for people en masse. He's caught the poise and fluid grace of the principal as she planes across the ice, calling up repeated echoes behind.
Once again it is a scene of collective enjoyment; of the hoi-polloi having fun. It must have been at Richmond Ice Rink (the columns give it away as you can see in the illustration from The Twickenham Museum in this link). It’s as if he’s doing his own personal mass-observation.
As we've seen, Phil preferred to find his subject matter on his doorstep, and here's another fine example of a local scene, though for once he's more interested in architecture than activity - he has endowed riverside Richmond with the grandeur of Venice on this high-summer's day. 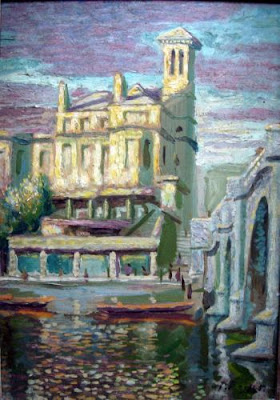 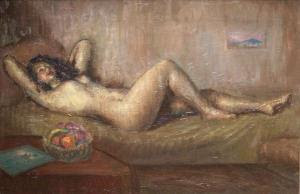 Don’t miss the ripe fruit allusion. Or the hint of mountain pictured on the wall - a visual rhyme with her explicit charms and, given her unabashed sexuality, maybe an aural pun on the artist’s carnal imaginings. Maybe he was only twenty at the time; the artist and his model: same old...same old...

Finally, there is this change of gear. 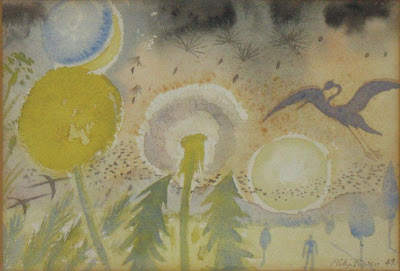 We are back to watercolour, with Phil exploiting its potential for happy accidents. It's also a step away from his more conventional representational approach. The jump in scale goes beyond the literal, and invites a more allusive interpretation: perhaps it's a meditation on post-war bomb-site Britain: the weeds reclaim the wasteland, someone looks on helplessly, some Braque-ish birds and a stork promise new life....hmm....I'm sure you could do better.
So that was Phil Poyser, an eccentric Bohemian-like character according to Richard James (and thanks to Richard for his help with this post), and judging from his art, a man of the people very much at home in his corner of south west London. Following Duchamp he was the next of our chessers with the other talent. There may be more in due course.
Dog Track comes from here. Chinese Tower, Playground, and Nude come from here (where it says that the Nude was done in 1922, when he was only 10, so I'm guessing that was a mistake). The Star is from here. Richmond Bridge is here, and Dandelions is from here. I also came across a reference to a Portrait of Bill Norris , but without an image. Various other works, including more riverside views, are referred to here.
Chess in Art Index
Posted by Martin Smith at 8:00 am

Many thanks, Martin. I really ought to return to the Chess Addict website at some point.

Just to add that Phil's opponent, Martin Goldschmidt had a brief and meteoric chess career as a junior. He then went into the music business and founded the Cooking Vinyl record label.

Thanks Richard. If it was Mereway Road, then it confirms that Philip really did like to stay local.

Yes, Phil was a very nice man: always friendly and with never an unkind word for anyone. Fondly remembered by everyone at R&TCC in the 60s and 70s.

I was Phils next door neighbour in Mereway Road through the 70's , a child then but he was as everyone says a true gentleman, softly spoken and a bohemian.

Thanks Anonymous for checking in with another nice reminiscence of Phil.

I've found another watercolour of his
here

Rather belatedly joining this post, I was also Phil Poyser's neighbour in Mereway Road from approx 1952 - 1967. A wonderful man, dedicated to his art. He rode a motorbike, as did my father, and they both broke down frequently. I remember the smell of oil paint always with him, and I & my family have 2 of his paintings, the London Apprentice at Isleworth and the Thames, I believe between Twickenham & Richmond.

Thanks Sueperfluous; the Poyser portfolio continues to grow.

If we could persuade you to let us post images of your two paintings, that would be magic.

Philip Poyser was my grandfather's brother and I'm thrilled to find any information about him at all. Thank you so much for your comments! I'd love to hear more if any of you can find the time.

I'd love to see the further info about Phil on fb, but the link didn't work for me. Any other way to find it?

And, anyone with a photo of Phil? I only have a couple of him as a very young man.