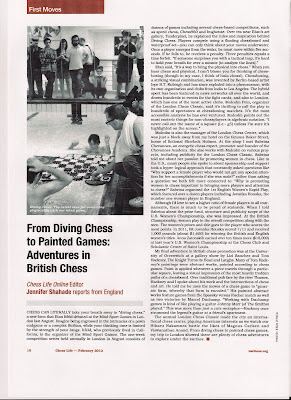 Perhaps furthest from reality, although the major subject of the piece, is Etan Itfeld, who (it says here) "debuted" this "new form" in the course of "the Mind Sport Games in London in August". Damn, I missed it. But never mind, for Mr Itfeld and Ms Shahade take tea in the course of her first paragraph and he sets out "the rules and inspirations behind Diving Chess".


Players compete using a floating chessboard and waterproof set - you can only think about your moves underwater. Once a player emerges from the water, he must move within five seconds. If he fails to, he receives a penalty. Three penalties equals a time forfeit. "If someone surprises you with a tactical trap, it's hard to hold your breath for over a minute."

It's also hard to hold your breath while laughing, but do go on. Itfeld, who "previously lived in California" - you surprise me - explains his concept further:


it's a way to bring the physical into chess.

One could of course achieve the same thing by throwing Mr Itfeld, with his waterproof sets and floating chessboard, into the pool, for which one would not expect to receive a penalty.

Ms Shahade, being a chessplayer, is also put in mind of chessboxing, although for some reason she believes it has "exploded into a phenomenon". Perhaps it has (if you can explode "into" anything). In the same sort of sense that UFOs are a phenomenon. 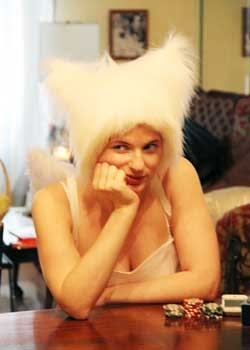 Jennifer's hat explodes into a phenomenon
By this point it was my brain rather than the phenomenon which exploded and I only caught up with the more sensible stuff (i.e. Malcolm, mostly, at least when he's doing his shop rather than the chessboxing) later on. But what's good in the first part of the piece could be recited within five seconds immediately after spending a period of time underwater.

But why? Why is so much chess writing so unchallenging, even when it comes to the most absurd or dubious subjects? Perhaps because a lot of it appears to operate on the principle that we need to 'promote chess' and that the way to do this is to give favourable mention to any old nonsense you happen to come across, provided that it has a chess connection.

I don't think that this is true. And I hope, one day, that will change. But don't hold your breath.

[Image: PokerStarsBlog]
[Chessboxing index]
Posted by ejh at 7:55 am