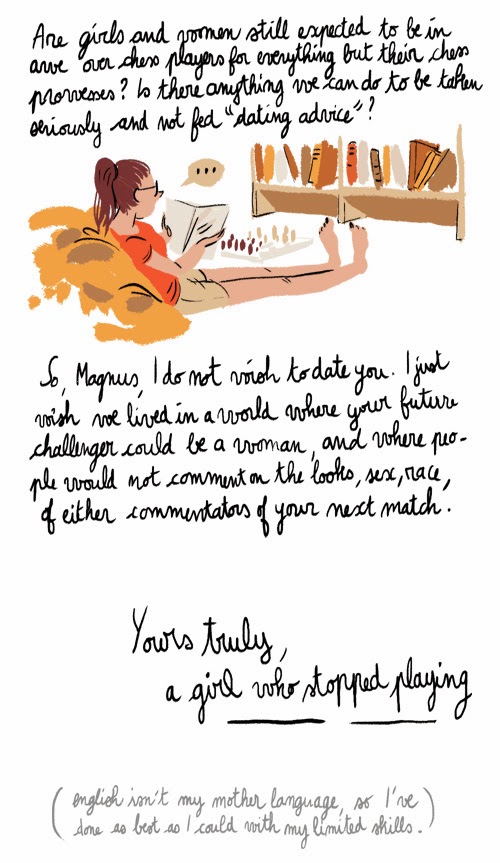 I couldn't agree more, people should behave respectfully to their opponent whoever they are - sexism is vile wherever you come across it. I don't understand why women are sgregated and more should be encouraged but if young lwomen meet this sort of behaviour nothing will change. It is up to clubs to sort this out.

Brilliant work. It always pains me to see someone smart and articulate leave chess, far more when it is due to sexism. It is obvious that zero tolerance is the only way forward, in chess and every other avenue of life.

What awful behaviour from so many men! Are there really so many sexist morons playing the game? How depressing...

@Ryan Emmett: yes, there are that many sexist morons playing the game. Famous GMs such as Nigel Short and Kevin Spraggett spring to mind. A lot of people think these guys are funny.

Sadly, there are many sexist administrators as well - the latest ECF debacle regarding the way the women's team was treated at the European Team Championships is case in point.

Person who commented under the name of Steven Carr: please take your bullshit elsewhere.


Anonymous J who began, "allow me to generalise ….":
Sorry, but no.
You may or may not be right in what you go on to say, but either way that's entirely beside the point. Intentionally or otherwise, to respond to this post with a suggestion of what women must do to end the behaviour described and yet make no reference at all to male perpetrators implies that harassment is the fault of the women who experience it.

This strip articulates the problem so well, cheers to the artist. I hope that through her work she finds a way back into the game. There's every reason to believe that her experience is far from unique.

I hate to say it, but the one thing that struck me more than anything else during the otherwise great online coverage of the match was the absolutely DISGUSTING behaviour of the commenters to the youtube stream. I can't believe that comments were not immediately closed based on what I was reading. Inappropriate ANYWHERE, let alone a sanctioned international event.

What a desperately sad story.

I know sexism is epidemic, but this story made me wonder if it is inherent in the male dominated chess culture, and if that culture is self perpetuating as a result.

My daughter started playing tournament chess 7 years ago (she's 17 now, we live in the U.S.). Once, during a scholastic event, her opponent's school mates razzed him in front of her because he'd "lost to a girl". She then proceeded to play a game with every one of those mates and their coach. She won every game!

I warned her when she first started playing that she might get some immature attitudes like that. Some adults react in a similar manner when facing a child in an adult tourney. In her case, it only makes her play harder.

If chess were a sport and obtained Olympic status, would this not ban any competition that both men and women could participate in?

Special pleading as for the horsey events would be needed.

I don't know if there is a lot of sexism in chess in England, having only played in a few e2e4 events where everyone seemed respectful, but maybe e2e4 isn't representative of all of English chess. As I was reading the comic, I felt Fanou Lefebvre's experience seemed similar to stuff I've heard here in France, so wasn't too surprised to find out she's French. It was almost painful to read, to think that people can be so callous and put someone else through so much suffering for no reason.

There seems to be a lot of low-level sexism in chess here in France. You never hear (or I've never heard anyway) anything along the lines of 'get em out for the lads' but things more along the lines of 'losing to girls' and crappy sexist jokes. If I hear the one about putting on a wig, a dress and some make-up to become the token female player (explained below), I'll probably explode.
The problem is there's never anything that's so bad that you can pull them up on it, it's like a background noise that's always there.

Efforts are being made by the FFE (Fédération Française des Echecs) to encourage more women to play. For example, the FFE has put in place an obligation for all teams in the national league from Nationale III (4th tier in a pyramid structure) upwards to have at least one female player (technically at least one male AND at least one female, but it's to encourage female participation). The principle behind this is good, but it can have some undesired side-effects.

For example, I've heard of cases, with local clubs, of a ten-year-old girl who'd only been playing for about a year, playing in Nationale III to make up the numbers (and avoid the deduction of points), so sitting in a car for up to two hours for an away game, playing a Fide-rated longplay game that only lasts 30 minutes because she's been checkmated in 12 moves, then having to wait around for another 4-5 hours for everyone else to finish before sitting in a car for another two hours. Little wonder that they stop playing after this!

Another side-effect of the minimum one female rule is that I feel sometimes women are treated as the token female player. If a woman steps into a club, a lot of players automatically think « Great, we'll have a female player for Nationale III » as opposed to just being happy that another person is interested in joining the club.

For the above reasons, I used to be opposed to the minimum one female player in N III rule, but now I'm not so sure, because at the same time, I feel if it were removed, a lot of clubs would make no effort to encourage female players. I don't really feel there is an ideal solution.

We're lucky in my current club to have three female members, all of them having joined only this year. I feel it improves the atmosphere of the club (I prefer mixed environments to all-male or all-female) and am doing all I can to encourage them.

Thanks for posting this thought-provoking piece.

My niece gave up chess when she was 10, in part as she was offended by sexist remarks made by her school chess teacher.

Now she's 13 and a black belt in Karate!

My father sent me a link to this blog and I see that he's already recounted in the comments the tale I was about to tell. Thanks, Dad!

I feel very fortunate to have spent my 6 (sorry Dad, 17-11 is 6 years of playing!) years of tournament chess in a mostly supportive and non-sexist environment. Snickers about getting beaten by a girl generally stopped when I beat the stuffing out of them over the board. I had seen what girls go through in other disciplines, like mathematics, and I was fiercely determined to stop the seeds of sexism before they even started in the people I would play. As I grew older, I have only been subject to one untoward remark about my appearance, but instead made the guy feel quite ashamed for not only hitting on a girl who could've been his daughter, but also being so animalistic as to let my (completely concealed) lady lumps distract his small wit from a game of the mind. I haven't seen him approach a single female player since.

It's definitely a man's world out there, folks, but hope is not lost. As long as we have courageous women sharing their stories and men being supportive of their anti-misogynistic messages, I know that changes will be made.

Maybe you're right, but it's a discussion for another thread I think.