Anand and Carlsen most certainly will.

Too obvious to mention? Perhaps, but I'm going to ponder it anyway. That and a thought or two about the GingerGM's latest ebook release on the Classical Dutch will form Part II of what will have to pass for the S&BC Blog preview of The Match.

He says it's a battle of the generations. You know what? I think he's right, and if there's anything that shows us that our contenders are from different eras it's how chess games begin.

I remember an interview Anand gave after beating Gelfand last year when he talked about why he chose to punt the ... a6 Slav in Moscow. He wanted something a little different, he said, and yet at the same time he didn't want to abandon the Slav/Semi-Slav complex of openings that had served him so well throughout his life.

I doubt that Carlsen, born in 1990 - the year before Anand relied on the Semi-Slav for an entire Candidates' match against Karpov - would really understand what Vishy was on about. Carlsen famously plays everything. It's his strength/it's his Achilles heel/it's both. Whatever. There's almost no limit to the tat that he's prepared to put on the board. 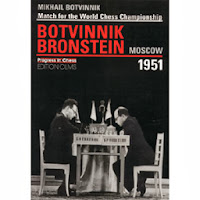 It's entirely possible that both Champion and Challenger will play one, some or even many queen's pawn openings in Chennai, but I doubt either of them are spending too much time worrying about what they'd do were Black to respond by shoving his f-pawn forward.

It wasn't ever thus. Game One of the '51 Botvinnik - Bronstein encounter began 1 d4 e6, 2 c4 f5 and turned out to be just one of seven Dutch Defences that they played. Imagine that. Near as damn it a third of a full-length World Championship match fought with a weapon that would be considered to be on the suicidal side of desperate these days.

So, OK, it's unlikely either Carlsen or Anand rushed over to the Ginger GM website to download a copy of The Killer Dutch ebook which was finally (existing Dutch fanatics will know it's had the sort of gestation period that you'd expect if you tried mating an elephant with a giraffe) released a week or two ago. The book's worth a thought for everybody else, though.

Curiously it doesn't include any mention of Williams' bashing of Boris. It does start with him duffing up Wojkaszek (2700+ and Anand's second in Moscow) in 20 moves, however, and a blitz win over Naiditsch as well as assorted victories over sundry other GMs (Sokolov, Agrest, Dumitrache, Gallagher, Chabanon etc) can be found within the text too.

If the Classical Dutch is good enough to see off the last Challenger for the World Championship and those other guys it's good enough for almost anybody, isn't it?

But let's go back to the World Championship and that generational thing. Traditionally these matches often throw up an opening that comes to define the entire struggle. There's Karpov's Bxf7+ in the Exchange Grunfeld in Seville, for example or the numerous Zaitsev Ruy Lopez games from the KK London/Leningrad and New York/Lyon matches. The Berlin in London, of course.

I wonder whether things will be different now. Could it be that with the shorter 12-game matches we have these days combined with a new breed of chesser we'll get something we never had before. Might Magnus Carlsen be the first guy to contest a World Championship match and not repeat any openings at all?

Point of order, m'lud - Anand's opening wasn't no ...a6 Slav. The ....a6 Meran, if you will, but really it doesn't have a name. Though back when Alekhine and Co were playing it did; though I can't remember what it was. It's in the Encyclopaedia.

But they can transpose into each other?

The look kind of the same to my inexpert eyes.

I'm inclined to think of it much more as a Meran with ...a6 than a Chebanenko with ...e6 though, partly because the Meran version came much earlier historically.

I'm not sure about 4...e6 being thought to be inferior after 1 d4 d5 2 c4 c6 3 Nf3 Nf6 4 e3, Justin, if that's what you're saying. Some people would think it was Black's best move. I know 5 b3 is a better version of b3 systems than some versions, but that's not a disaster; I'd have thought White's most theoretically challenging move was 5 Nc3 and a Meran.

As to transpositions, I'm not a great expert, but AFAIK in the Chebanenko, if White goes 5 e3 b5 6 b3 Black would normally play one of several moves that wasn't 6...e6. And conversely in Anand's line if White plays 6 b3 I think Black would not normally play 6...b5, rather some move like 6...Bb4. So while they can in theory transpose into the position after (say) 3 Nc3 Nf6 4 Nf3 a6 5 e3 b5 6 b3 e6, in practice I think both variations try to avoid that position.

But that could be total bollocks. I'm sure Black *can* play that position starting from either route.

The Encyclopaedia thinks it's called the Alekhine variation of the Meran. Not sure too many people would recognise that name these days.

I know 5 b3 is a better version of b3 systems than some versions, but that's not a disaster; I'd have thought White's most theoretically challenging move was 5 Nc3 and a Meran.

There's also 5.Bd3, which in some people's opinion (e.g. Vigorito in his Semi-Slav book) leads either to a Queen's Gambit Accepted or an inferior line for Black. Not theoretically a disaster of course because the QGA is perfectly playable, but an inconvenience to the Semi-Slav player. (White also has 5.Nbd2, although that wouldn't bother me too much. Indeed it didn't bother me when my opponent played it on the only occasion I've been in that position.)