Yesterday we were looking at the Chessgames.com notes to a Botvinnik-Euwe game from 1948 and discovering that while the site attributes* them to International Grandmaster Raymond Keene...

...they are in fact plagiarised from the second volume of My Great Predecessors.

If you looked through the Chessgames.com notes, you'll have seen an afterword, which is a little puzzling, in so far as it refers to "at this very moment" and "next year".

This is explained in the comments.

Or rather, it's partially explained in the comments. A rather fuller explanation can be found by looking at the chess column in the Spectator for 15 September 2007 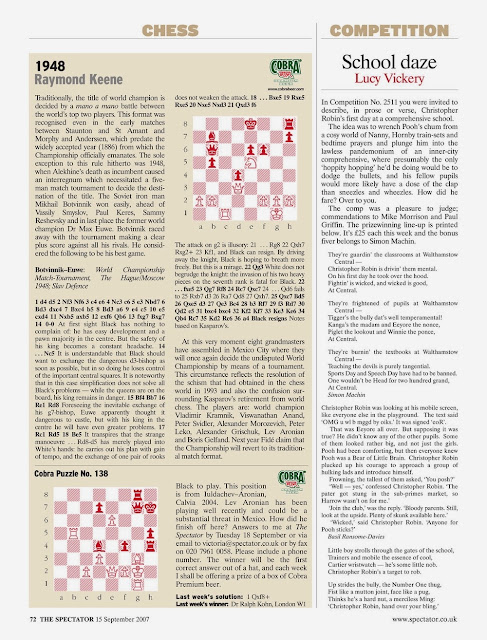 in which the afterword from Chessgames.com appears. 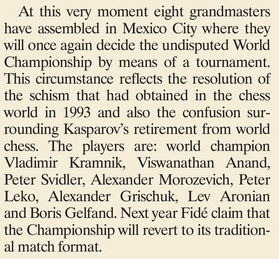 As indeed does everything else - including the incorrect "breath", rather than "breathe", which error, as was noted yesterday, Ray simply copied along with the rest.

Not that you'd know it was copied, since Chessgames.com do not tell us that these notes are from the Spectator.

Here, for instance, is the introduction to the Chessgames.com notes 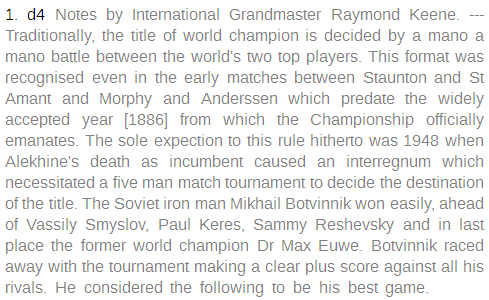 and the introduction to the Spectator piece. 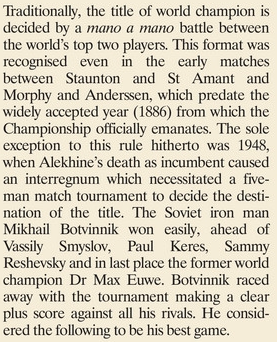 Everything in the Chessgames.com notes appears, exactly the same, in the Spectator notes, as indeed it previously appeared in My Great Predecessors. Chessgames.com do not inform us of either.

One is the note to Black's twenty-fourth move

which, shorn of "alas", is copied from My Great Predecessors.

The other is the little note at the end of the game in the Spectator.

Good Lord, you're saying. That's an acknowledgement. I didn't know Ray did that sort of thing.

What can one say? He used to. If he thought he had to.

Of course, they're not "based on", or not unless you think you could copy out Pride And Prejudice and then claim it was a novel written by yourself, but "based on" a novel by Jane Austen. Moreover, from the Spectator note, you'd never know where Kasparov's notes originally appeared. But it is an attribution of sorts, and it appeared when these notes were in the Spectator in 2007.

But not when they were reproduced on Chessgames.com. That little bit was cut out. Which is funny, because not much else was cut.

Now why would Ray do that?

We could say that it was an accident, he meant to leave it in but it got cut out. But given the length of Ray's remarkable track record in this area, I don't think I'm inclined to be that generous. I think we can assume that it was cut out so that it fitted in with the false claim at the head of the piece.

Chessgames.com need to remove that claim, don't they?

* UPDATE 13 January: the plagiarised annotations now seem to have been removed.


[More on Ray and Chessgames.com tomorrow]

why is the blaggard not swinging from the gibbet??!!