[Would you believe it? The world of chess riven by scandal and controversy and our old friend is nothing to do with it. Just goes to show the point being made in the second paragraph below...]

Ray Keene is sixty-six today. Happy birthday, Ray. Though it's not been the best year of his sixty-six.

It's worth reflecting on what a much-diminished figure Ray is now. Here is a man who was twice a British Champion, a world championship second, an organiser of world championship matches. In the Eighties, when he collected an OBE, he all but controlled British chess and aspired to control world chess as well. At one time a noted and witty chess writer, at another the leading figure in the leading English chess publisher when that was a title worth the holding. For many years a powerful figure, one accustomed to summoning expensive lawyers to threaten anybody who drew attention to the less glorious aspects of his business practices.

But what's left of all that now? His chess columns - if they are his - are publicly mocked, as much for their laughable quality as their pitiful plagiarism. His books go largely unread, recycled trash published by his friends or the likes of Sam Sloan, or plagiarised trash the subject of humiliating press coverage. His publishing ambitions are reduced to Hardinge Simpole reprints and the risible use of sockpuppets to promote his books on Amazon.

What of the tournaments, the largesse and patronage he was once able to command? Even the Simpson's events seem to have disappeared. The OBE and the social ambitions that came with it are reduced to lunch with aristocratic cranks and using the House of Lords for a charity scam. The dodgy friends and cronies are a constant source of amusment.

He is still, of course, at the Times and Spectator. But only as a caricature of his former self. 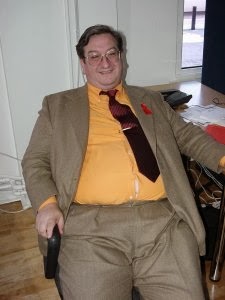 A caricature of his former self

I doubt that Ray admits as much to himself, chatting away on Twitter and his chessgames.com account as if he was still a figure of world-striding significance. No doubt in Ray's imagination it is always Baguio in 1978, exchanging barbs and presents with Baturinsky. Or London, in 1986, with Prime Minsters past and present queuing to share his company. Or 1985, Buckingham Palace and his OBE. Or it is Blackpool in 1971. Or Reappraisal has just been published, to acclaim.

Dorian Gray, having sold his soul, stayed physically as he was, with only his portrait showing his true state of degeneration. With Ray it is rather the other way round. The reality has deteriorated beyond repair. But his self-portrait remains unchanged.

Shouldn't that be a dinner jacket?

It's tempting to see Ray as a study in Our Times, and if this were a novel - written in a weekend, naturally - I would do precisely that. Rise and decline of a talented young grandmaster and author, who finds that cheating and treachery is a swift path to fortune, and a slow road to perdition. A very slow road indeed.

Or, if you like, a study in corruption. A study in the silence and collusion that makes corruption possible. Without which Ray's career would be terminated tomorrow. Would have been terminated long ago. Looking back, for instance, at Ray's betrayal of Korchnoi in 1978, one wonders if Stuart Milner-Barry ever had cause to reflect that had he spoken out against Ray, rather than brushing away Korchnoi with a nothing-to-do-with-us-old-boy-we're-behind-our-chap, it might have saved a lot of trouble later on.

But there he still is, much diminished but still there nevertheless, having survived Korchnoi, Tunis, BrainGames, more than one episode of plagiarism before the present deluge, any number of other scandals and two dozen appearances in Private Eye.


...the sheer pettiness of it. Here was a man with the opportunity to help win the world championship for Viktor Korchnoi, something they almost succeeded in doing and something which they would have been closer still to doing had all their energies been directed to that goal. The world championship. Ray went out of his way to put that prize in jeopardy. Why? To write an instant book.

To which one might add that he was obliged to resign from the then British Chess Federation over the fiddling of a thousand pounds, less than six hundred of which he pocketed personally. Six hundred pounds that he certainly didn't need. That's what sticks out. Not the enormity, but the pettiness. 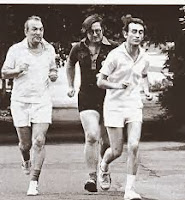 Was it all worth it in the long run?

Has it all been worth it? For Ray? For chess? For journalism? For anybody?

Surely the worst journalist in the country is whoever writes the cover stories for the Daily Heil?

On the one hand, I appreciate your investigative journalism, commitment to the truth, and entertaining writing.

On the other hand, I have to wonder - does Ray Keene care as much about this blog as this blog cares about him?

Blindingly obvious answer to that questions, I'd have thought Ashish.

Talking of Ray's decline, you could also add the Staunton Memorial being superseded by the London Chess Classic.

The Simpsons tournament was the best - indeed only - game in town for many years. Shame it's gone really.

Surely the worst journalist in the country is whoever writes the cover stories for the Daily Heil?

I wait for the day that Ray Keene is knighted for his services to chess. 'Sir Raymond Keene' has a nice sound to it. Happy 66th birthday to one of the greatest men that has ever lived.

That photo made me think. 66. The number of the feast!