How the Horses move*

As I recall, the first time I ever heard Horses was in Angus French's car on the way back from a Surrey League match years ago, and it was Angus who sent me Saturday's New York Times interview with Patti Smith, which contains a surprising amount of chess.

This is because her biography M Train, which was due out yesterday, apparently contains not one but two references to meetings with Bobby Fischer. 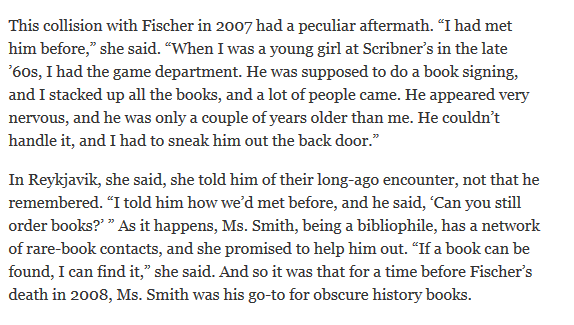 I must have missed this before: it's not new, as it's apparently mentioned in Helgi Olafsson's book and indeed by Patti Smith herself some time ago.

But I wonder if, on meeting Fischer for the second time, she was put in mind of her great song Birdland, about a little boy whose father, in dying, deserts him, and who, aptly enough "seeing everything just a little bit too clearly", thinks he sees a spaceship and begs his father to take him up in the ship and not leave him there alone.

It's the sort of thing you might think of, on meeting a terrible, lonely figure, abandoned by just about everybody he had not otherwise driven away.


[*I could have had Because the Knight but Morgan did that gag ages ago]
Posted by ejh at 7:55 am