Many years ago, I recall a certain fuss because a leading Russian player and psychologist, Nikolai Krogius, perhaps over-reliant on Freud, had written a book, Chess Psychology, which suggested that part of the motivation involved in attacking and checkmating the king related to a desire to kill our fathers.

I had forgotten about this until I happened, over the weekend, to receive a free copy of the June 2007 edition of Chess magazine, in which the first part of a series on Owen Hindle had appeared, in which David LeMoir traced the early professional career of the Norfolk-based FIDE Master.

One particularly nice game was the one we give below, from 1961, in which his opponent, a student at Birmingham University, is on the wrong end of a minature in the Sicilian Defence. White to play and win in the following position: 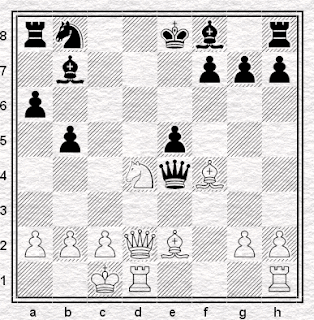 I wonder what Mr. Krogius would have made of Robin's favourite move: Q - R5?

I wonder if you're thinking of Idle Passion by Alexander Cockburn? I never read that one myself but I have read the Krogius book (which I thought was pretty good) and I don't recall the Freudian stuff being in there (granted that my recall of books read a decade or three ago is imperfect).

I've not read the Cockburn book, (though I'd like to if anyone who knows me has a copy) but I'm operating off a very old memory of a very old review. I may therefore be talking utter tosh.

As for Robin's moves, I am thinking of a future posting involving Richard Nixon's "Madman" Theory of Deterrence...

Incidentally, on Saturday night we were treated to the Haldane Ending, which, despite a pawn deficit, knight for bishop and the opponent's rook on the seventh, is of course a draw.

i used to play Risk with somebody who adopted Nixon's madman theory. I'm assuming that as a 10 year old he found it independently rather than had studdied Tricky Dicky's work.

If anybody ever attacked him he used to launch absolutely suicidal counter attacks over and over again until he was himself knocked out of the game. Of course in the meantime he'd ruined the other person's position too allowing victory to go to player C D E or whoever.

He lost one game but then gained a good deal of currency for any further sessions.

Didn't Reuben(?) Fine write a bunch of stuff about Freudian analysis and chess?

I played Krogius in a simul as a junior (me not him!). Won exchange very early but let him back in it and ended with K versus K. Tongue in cheek I offered him a draw. He was not one of the few Russians who ever put their tongues in their cheeks and so he looked at me in bewilderment. Leonard Barden said afterwards "I think we should have got more out of that game" btw.
Andrew

I have a copy of Idle Passion on my desk as I type this.

Ah, good news. Can I try and borrow it next time I'm in England?

Sure - we could meet up at a Richmond Rapidplay I guess

I guess I'll probably see Robin Haldane at the next Richmond Rapidplay - I could pass it to him.