We've had some of Justin's (IV, III, II, I) and one of Tom's, so it's about time I had a think about a few of my favourite moves.

First up, although I'm not doing this series in any particular order, comes this Winawer sideline:- 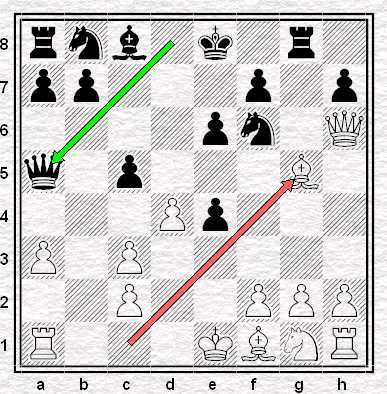 There's something rather appealing about Black responding to this with ... Qa5 - simply allowing White to take a piece and threaten mate in one at the same time.

I first saw the idea in a brief pamphlet on the Winawer published by IM Andy Martin about twenty years ago. He only gives 10. Bd2 Qa4 with Black having a clear advantage (according to IM Martin at least) but much more fun (and to my eyes more logical than retreating the Bishop) is,

which reaches the position I was thinking about at the weekend - so well done to Richard and Justin for guessing the opening correctly. I wonder if I'll ever get to test their assessment that Black is OK.
Posted by Jonathan B at 8:46 am

I don't see why not, though admittedly the 4.a3 line is rarely played now.

It has to be said there's no substitute, if you're going to play an opening, for doing your own analysis. Nobody's expecting it to be of GM standard but then again nobody's expecting your OTB moves to be of GM standard either. But just the very experience of moving the pieces over the board and wondering what options each side has, what difference is made by different move-orders and so on, will do you the world of good.

Incidentally, if you do get the chance to play it, don't rattle out the moves. Doing that, you might as well wear a T-shirt saying "I have studied this line at home so be sure to deviate shortly".

We could test it Friday lunch if you like, before my pint!

*JUSTIN*
RE: 4. a3 being rarely played these days. I had it in a game last week - the first time I've faced it in a serious game in about 20 years (although to be fair the French was not my main weapon for two-thirds to three-quarters of that time).

It's an interesting point. Sometimes I think there's value in shouting from the rooftops that the opponent, should they wish to go down a certain line, will have to be ready to take you on in a prepared line. Not always though.

Depends whether or not you want them to deviate I suppose! Do you?

The point about doing your own analysis - playing correspondence chess I'm more or less obliged to do this, because I have to assume that the opponent basically has access to the same material and resources I do, and therefore I can't just "outlast" them as I might at the board. So unless I always want to be caught be the opponent's new idea, I really have to try and find somewhere in the published theory that I'm not happy with and deviate.

It's not as hard as people might think - if a line appears in a book it doesn't follow that the author spent weeks agonising over it and checking it. I don't mean they necessarily just copied out it without thinking, but they quite likely just had a glance and though "hmmm, that looks OK" and moved on to something else. You're not writing a book, you've got time to look harder.

One game i played last year I did indeed want that.

It was a Bf4 QGD. He, evidently, was hazy as to the theory (as was I). I blitzed the first moves hoping to bluff him out of the sharp 0-0-0 lines because I couldn't really remember them.

As it turned out he did indeed castle long but at least I gained time on the clock. He deviated from mainline theory shortly afterwards and I got the advantage (not that it stopped me from losing the game in the end but that's another story).

As for this particular line...

I'm not sure there ARE any profitable deviations for White once Black has played ...Qa5.

White could, I suppose, not play 12. Qxg5 and move his own Rook instead. That doesn't look too good to me though.

The answer to your question, then, is that I'd be quite happy if White deviated from the line given.

The advantage of playing ...Qa5 quite quickly would be (hopefully) to try to give the opponent an unpleasant surprise and destabilise his/her emotional state - which might lead to problems assessing the resulting positions objectively which in turn can lead to mistakes.


Having said all that, I've never been one for just blitzing opening moves as soon as possible one after the other. I find it very difficult to switch modes when I do eventually have to start thinking. Perhaps it's like an athelet trying to run a race without warming up first?

Anyway, the odd instant response can be quite effective.

I'm not sure there ARE any profitable deviations for White once Black has played ...Qa5.

I was thinking that maybe you wouldn't want to put them off playing 9.Bg5.

'sfunny, what bothers me about that line isn't the sharp lines, it's that White can render the posiiton very drawish by playing 8.cxd5 or 9.Be2 after which alternatives to 9...dxc4 (which exchanges queens in a symmetrical position) may be a bit iffy.

Not that I've ever seen a club player doing that mind: in order to try it they'd have to invite 4...c6 anyway.

Oh I see what you mean. No, I wouldn't necessarily want them to avoid Bg5 ... and I agree with you in that context there's probably not much to be gained by over hasty play at that stage.

Also, a quick moment's reflection with Fritz convinces me that 12. Rc1 is just a losing move.

White has 10. Ne2 - which I hadn't considered before - but that looks like easy play for Black, albeit less wild.

As for the Bf4 QGD lines, heading into a drawish line never bothered me :-)

Anyhoo, back to studying now ...

Had a chance to look at the Queen check now...

trouble is if White responds Ke1 then Black doesn't seem to have anything better than ...Qc3+ which is going to end up as an immediate draw if Black doesn't then take the rook this time around.

possibly worse news is that White seems to be able to play Kd2 and after ... Qd4+ s/he has Bd3 (Fritz spotted that one not me) with play similar to the mainline but with the Bishop developed.

btw:
Andy Martin's booklet ("A Line For Black, no.1 The French Winawar" - TUI Enterprises Ltd 1988) really does say 10. Bd2 Qa4 clearly better for Black, although that's obvious rubbish because the Knight on f6 just falls off.

He must have meant to throw in 10. ... Rg6 and only then ...Qa4. I'm not at all sure that clear advantage for Black isn't still a bit optimistic however.

Doesn't really matter that the queen check doesn't work, since the capture of the rook is good. The important thing is that it was seen and examined.