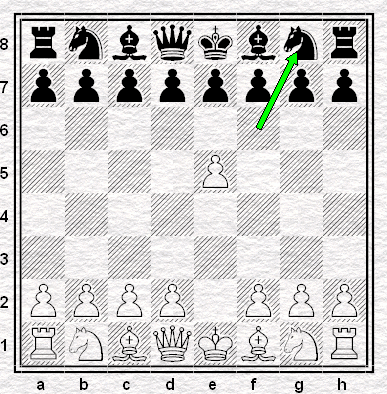 Might - on a psychological level - this move be closer to madness's nextdoor neighbour - that is to genius? After all, the move implies the uncomfortable message from black to white that, I'm not scared about you in the slightest, even if you do have the white pieces. I'm so confident that, in fact, here: have two free turns to improve the initial position, all by yourself. Good luck, you'll need it!

Maybe... Or maybe not. Tigran Petrosian was not famous for this kind of thing - accepting an inferior but unusual position in order to disconcert his opponent - instead, his style rested on his defensive talents. And he played 2...Ng8 in a game from Moscow, 1966, against Isaak Boleslavsky, no less. Petrosian lost, but that had nothing to do with the opening. Perhaps, then 2...Ng8 is more in tune with the old defensive rule, do not create unnecessary weaknesses?

But Petrosian played the move once & once only. Others have been more persistent. According to Chess Live, one Maarten D Etmans has played the move 26 times over the last couple of years. Yet despite this expertise & experience, his score is not an entirely convincing +6 =8 -12.

Or perhaps I'm missing the point entirely, and the attraction of the move is in fact its flambouyantly suicidal streak. Katrin Daemering's experience might suggest this: having lost two games with the variation in the mid-90s, she finally gave it immediately after scoring her sole victory with it.

According to Colin Crouch in his How To Defend In Chess, he did in fact do this a fair bit in Olympiads, where he had to play to win.

Have a gander at this for instance.

When I started to take a serious interest in chess at the age of 15 I had the misfortune to fall in with a crowd of older, experienced, boys (one of them owned a copy of MCO) who used to spend their lunchbreaks playing through the games of Petrosian and trying (usually unsucessfully) to understand how he won his games. You have to understand that this was 1966 and Petrosian was God, just having sucessfully defended the World Championship against Spassky. Later, when I had enough money to buy chess books one of the first I bought (and certainly the 1st collection of games) was PH Clarke's "Petrosian's best games of chess, 1946-1963".

Anyway, my basic message is that prolonged study of Petrosian's games (particularly when young) leads to a sadly warped view of how to conduct a game of chess. I spent years trying to improve my knights and keeping my pawn structure immaculate but rarely did my games finish in the same way as Petrosian's. Do you guys realise that young chess players may be reading this and you could be blighting their chess development by going on about Petrosian? Where is your sense of responsibility?

you have to agree it's not a good move!

surely that was Geoff Hurst???

That is a tremendously peculiar game, Justin, thanks!

I just played with White against this. Here is the game:
http://www.youtube.com/watch?v=wEst9n5YDfw
I think that the correct response by White is to play with the pieces. Pawns don't work; if White advances d2-d4, f2-f4, that justifies the loss of tempi. Black can play Nh6! like in the French. Perhaps my approach could cause Black problems. My idea with Bb5!? (I might overestimate this) is to stop Nb8-c6, annoying my pawn center. So I continue just developing. I want Black to take as many of pawns as possible, later, because an open game will allow White to exploit Black's loss of time. That is why I play these imaginative pawn sacrifices. Ok, probably not scientifically sound, but a practical game demands them. Thanks.

Could black not have played ..Bc8 rather than ..b6? Not convinced that Bb5+ is the most worrying possibility for black, but it certainly worked well here.

Tom, you are right - ...Be6-c8 would hold things together. However it's hardly an easy game to defend the position. A computer would like the 2 pawn advantage, but in a practical game, the undeveloped 2 rooks, bishop and knight are undesirable.

The refutation of the opening btw is almost certainly 3.e6.

link to video mentioned above