So Anand is the new World Champion - and if you don't believe me you can see the very moment it happened on this video published on the ICC.

Today Chessbase have a pictorial report of the closing ceremony and Anand's celebratory meal ... 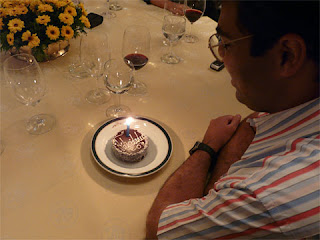 "I'm world champion now, bring me a F***ING BIGGER CAKE"
Anand is unlikely to have said.

... while at the bottom of their report on the last round there's a few minutes of the new champ being interviewed on video.

In amongst the mundane verbiage you'd expect to be on display in such situations there's also Anand giving a somewhat less than unequivocal "bring it on" response to a question about next year's duel with Kramnik. I do hope that's not going to be the start of a campaign to get out of the match.

Anand, the fawning interviewer and anybody else for that matter, can bang on about the title be regained or won for a second time but in truth it was only on Saturday night that Anand became world champion. He took the title from Kramnik who won it from Kasparov and so on back to Steinitz.

Let's be clear, Anand is the World Champion and number one rated player in the world but if he fails to beat Kramnik in a match, the traditional format for deciding such matters, the legitimacy of his claim to be the 15th Champion will be compromised.

For now, though, Anand is undisputed King. 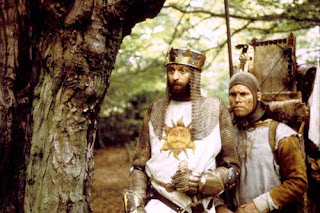 recetly we've been debating whether Vladimir Kramnik is or is not a big cowardy custard ...

If Kramnik is brave Sir Robin (and in the video above I fondly imagine the minstrel with the tambourine to be Loek van Wely) who might Moro be?

Morozovich was up for a scrap throughout Mexico 07 and was involved in more decisive games (eight) than anybody else. Full of fighting spirit, he never gave up but try as he might, he had an unfortunate tendency to come off second best ... a bit like the Black Knight really.

You're absolutely right about the size of the cake ... this ia an absolute disgrace. Something like this would never have happened when Max Euwe was FIDE president. Fischer -Spassky was followed by a proper bash that everyone was invited to (Fischer sat next to Spassky and showed him all his blunders on the famous pocket set). I bet the cake was a decent size, too.

Sorry for hijacking your thread Jonathan but there seems to be no reply option for Justin's above.

Justin
Also playing in Metropolitan (new venue this year). Will be good to meet up again. Remember don't beat me and then publish the game on the website!
Andrew

Ah, see you there then. The comments are now restored above, don't know what happened there....

"i'm the World Champion and all I got was this miniscule cupcake!?" Schande.