The King is Dead

About twenty to nine last night Anand agreed a draw with Leko and confirmed what's seemed inevitable for several rounds now - he's the new World Chess Champion. Unsurprisingly he didn't take any risks (the entire game is published in my old 1989 book on the Marshall), and after about 13 minutes thinking time, Vishy was able to leave the board for a celebratory drink, 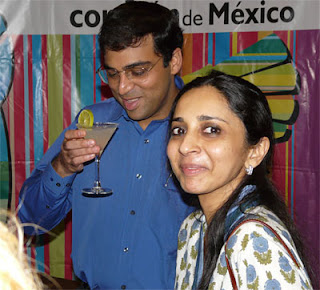 and a press conference. 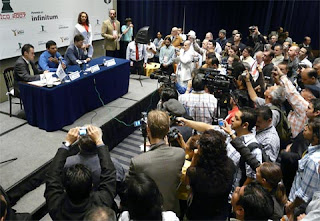 Anand got the ball rolling as early as the second round, showing some excellent prepration to win with black against Aronian. He went on to win games by accepting Svidler's Marshall and declining Grischuk's in rounds five and seven respectively before finishing off with a victory against Morozevich's Najdorf in round eleven.

Aside from the games he won, Anand also showed resilience in defence, surviving a difficult game against Kramnik in round three - how different things might have been if Black had ended up winning that one - and a similar ending against Grischuk towards the end of the tournament.

With the exception of the Svidler game, which is analysed on chessbase, all of the links above are to video reports provided by the ICC. Chessbase have also provided a free file of all the games from Mexico 07 in PGN format.

So that's it Anand is world champion and there can be no disputing it ... well not until he squares up with Kramnik in 2008 anyway. Vishy will need to find something against the Petroff and Kramnik will need to do better against the semi-slav. It should be a great match.


PS: I forgot to mention I stole the photos in today's blog from chessbase.com too.