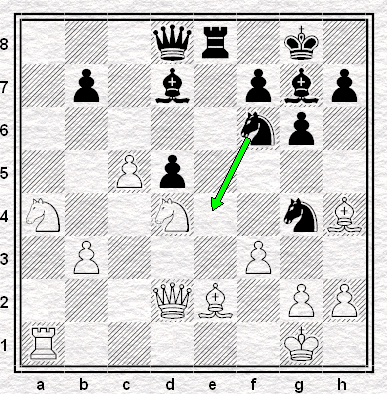 I remember being extremely excited, watching this game on television. I was just eleven. It wasn't a game in a book, it wasn't a game in which you knew in advance something spectacular was going to happen. Even if I had, at that age I would still have been excited. I'm still excited now, to tell the truth. But at the time it was the most amazing thing, to see Nunn, who had already put his knight en prise, proceed to fork his own knights.

It's funny, it's always that, the self-fork, that I've remembered. So it wasn't until I played through the game when writing this piece that I remembered that he also put his queen en prise as well.

"But at the time it was the most amazing" thing, to see Nunn, who had already put his knight en prise", proceed to fork his own knights"

This is nothing special ... I allow my pieces to be forked on a regular basis. Not normally deliberately alas.

v. nice game this one. Hopefully something played tonight in the last round in mexico will match it.