Yesterday I began my morning reading Justin's post on unpopular openings. In considering how club players build repertoires of opening variations he wrote, "We tend rather to change than add."

Very true, I thought. Well, true for me anyway.

Like Douglas Adams’ private detective Dirk Gently, I believe in the inter-connectedness of all things. It was no surprise, therefore, that half an hour later, when in the coffee shop reading Truman Capote's In Cold Blood, I came across this passage:-

“… she continued to tinker with her handwriting, slanting it to the right or to the left, shaping it roundly or steeply, loosely or stingily – as though she were asking, ‘Is this Nancy? Or that? Or that? Which is me?”

Is this not the same thing?

If I've learned one thing about chess over the years it's that selection of opening variation is really about the types of middle game one wants to play rather than the sequence of moves with which we would like to begin the battle. Like a Rorshach Inkblot Test, how we respond to a chess position tells us something about ourselves - and not just how good at chess we are. The traits that combine to make up our chessboard tastes are as distinctive as the way we write our names and the personality differences reflected in our relative preferences for, say, IQP or piece activity (the diagram here makes a good chessblot test I think) will be played out in other areas of our lives too.

So, getting back to Capote, is this the reason why I've often changed my openings over the years? Is 1. ... e5 Jonathan B? Or the French? Or the Caro-Kann? Which is me?

It's not true anymore, but when playing with the White pieces 1. e4 used to be me. Even longer ago, I used to play king's pawn openings hoping for

I won many pleasing games in this variation. I played into it hoping to catch my opponents in sharp lines they knew less well than me or, failing that, expecting I would be able to out-calculate my them using a tactical ability I fondly, though probably naively, considered to be my strength at the time.

Although it brought me many memorable victories, and wins in the Moller tend to be rather flashy by nature, over time my enthusiasm for the line began to wane. I started to notice that although I would often win against players graded higher than myself, I would also sometimes have accidents against people I thought I should beat easily.

I clearly remember the game that finally put me off the Moller and encouraged me to switch to the somewhat less racy Four Knights Opening.

I don't remember my opponents name, where it was played (possible a tournament in North London around 1993) or whether this was the very last time I played the line, but Jonathan B v A. Bloke went... 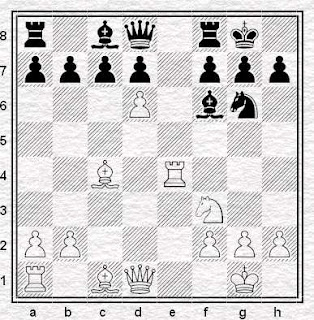 I didn't mind too much when Black played ... 0-0 rather than the theoretical ... d6, but 12. ... Ng6 was new to me. It was, I realised afterwards, one of those situations which often caused me trouble - a lower rated player punting an inferior move which I then failed to refute over the board.

The main variation I calculated here was ...

This isn't best play by any means (amongst other things Fritz suggests 13. Qe2 [clear advantage for White] and 13. ... b5 [small advantage for Black]), but at the time giving up another pawn to add fuel to the attack looked sensible to me. The problem was I couldn't see how to proceed from there. Unfortunate given that White has a forced win starting with his 16th move. Alas I didn't find it*, played something else and again went on to lose.

So, my taste for highly tactical games gradually morphed into the more positional game I now prefer. The Moller was replaced by The Four Knights just as later I would abandon 1. e4 altogether as I headed for the calmer waters of 1. Nf3 - a change, I'm sure, that is not at all unrelated to the process of ageing.

Is that, I wonder, ultimately the reason why we club players tend to change opening variations? Is it because we ourselves are always changing?

No, it's because we ourselves are always losing.