In the comments a few days ago ChessBuff said, correctly, it was, "too early to write Kramnik off". Nevertheless, the fat lady started loosening up her vocal chords when he (Kramnik not ChessBuff) disastrously lost to Morozevich and then only drew with Anand and now the game's well and truly up.

Anand turned over Moro himself in Tuesday's 11th round. Vishy getting to +4 was not too unexpected, he's been in great form throughout the tournament (with the possible exception of his very first game against Gelfand) after all. It was more of a surprise, however, that when the aforementioned chubby bird got up to do her bit, Kramnik was already leading the singing.

Kramnik ran up the white flag with a 13-move draw against Grischuk. According to the live games transmission website at chessmexico.com Grischuk took 18 minutes for the game and Kramnik just 13. A world title surrendered in just half an hour ... and needless to day, it didn't go down very well. Not by a long chalk.

Leonxto Garcia, on the official tournament website no less:-

During the press conference we heard Kramnik's saying: "If I didn't accept the draw offered by Grischuk, I would have offended him", that phrase outraged the veteran journalist Arturo Xicotencatl who replied to the Champion: "Don't you think that you are the one offending the crowd of fans that follow you on the internet?" The Russian explained once more the supposed balance of the position, but the truth is that he convinces no one. Only a severe sickness could justify such behaviour, but Kramnik has no signs for it throughout this Championship.

Mig Greengard didn't miss out either, giving Kramnik a verbal kicking in his ICC Round 11 podcast.

It seems it wasn't only the journalists who were a bit surprised. According to Chessbase's Express Report for the round:-

Kramnik was asked why he chose to play the Petroff in this critical situation where he needs every point he can possible get to defend his title. Before he could answer Grischuk grabbed the mike and said: "Yes, I too would like to ask the same question."


People in glass houses shouldn't throw stones so I should perhaps own up to the fact that while Grischuk and Kramnik were getting it on, I was also playing chess. As it happens, I also whimped out and agreed a draw when I really should have played on. It's not really the same though is it? Two major differences spring to mind.

Most of all, nobody is ever going to bother to say to me, "Oi, Vladimir. You see that Monty Python knight ... that's you that is". 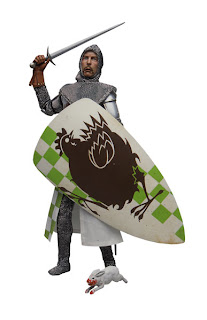 Before he could answer Grischuk grabbed the mike and said: "Yes, I too would like to ask the same question."

Did he really? Here's a question for Grischuk. Who was playing the White pieces in that game?

Where were these people when Gelfand was giving Anand a quick draw - when Gelfand had the White pieces - just a couple of rounds beforehand? Come to that, how much did any of them have to say when Anand drew quickly, with those same White pieces, against Aronian?

(Leontxo García gets on my nerves, by the way. He's kind of a chess equivalent of Brian Woolnough or Harry Harris. Makes a lot of noise, but never at the expense of whoever's really top of the tree.)

Maybe Kramnik has given up on this tournament, & is now preparing for a match v Anand.

I met Leontxo Garcia when I played Benasque. Before the start of the round there was a minutes silence. I think I was the only one who didn't know what it was for, which was ironic as it was for victims of the London bombings that day and I was the only one there from London. I found out after from my opponent, which made the game very difficult as I knew my wife was trvelling through Central London that day. Immediately after the game I recognised Leonxto and he told me what he knew of the bombings and he let me use the internet in his office there, where I was able to work out that my wife couldn't have been in the affected areas at those times. That doesn't really have any affect either way on ejh's comments, but it was certainly very nice of him.
Andrew

Hey Jonathan, your captain was certainly pleased with your Surrey league result. A draw as Black against an opponent who was stronger on paper has helped us get a result - probably a win - against last year's champions.

I am disappointed with Kramnik too. I think he ought to be fighting to win the championship and mindful that he's being paid handsomely to play. I don't blame Grischuk. I think he could reasonably have expected Kramnik to tango with him by responding differently... Certainly Grischuk has been entertaining the punters in this tournament.

But couldn't the same be said for Kramnik, that he might have expected Grischuk not to just chop wood? The courageous poker-maestro Grischuk? Who is presumably also being paid to play?

I think the situations for Kramnik and Grishuk (and also Gelfand) are different. Kramnik is expected to fight to retain his title. But, so far as I can see, he hasn't done that. Less is expected, on the other hand, from Grischuk but I think he's shown plenty of bottle. (Gelfand impressed too, early on, though it now seems that he wants to finish the tournament as quickly as possible).

There will be more on this in tomorrow's posting, by the way...

fair comment about Grischuk - it might also be emphasised that it was *he* who offered the draw.

As to your comments about the Gelfand, Anand and the short draws of others ... well quite a lot of noise has been generated on the subject throughout the tournament.

the following quotes are both from earlier Garcia articles posted on the official site (dodgy translation not his responsibility I understand)...


Viswanathan Anand had more than enough reasons to expect an exhaustive fight with Black against Boris Gelfand. But the Israeli didn't achieve any opening advantage, and both disappointed the crowd by having a quick draw, one of those which should be prohibited in elite tournaments

and from the first round

To the inmortal Pavarotti never even occurred to suspend a performance in the best moment just because he didn't feel like singing. But today, Kramkik and Svidler, decided to agreed on a tie in a position full of life, frustrating the worlds' fans with an attitude that should be prohibited


I suspect Angus and Tom have nailed it.

We (or I at least) expect world champions to die with their boots on and Kramnik is already preparing for the match against Anand next year. If there wasn't going to be one perhaps he'd be fighting a little harder.

Links to the articles quoted above...

To the inmortal (sic) Pavarotti never even occurred to suspend a performance in the best moment just because he didn't feel like singing.

What a completely fatuous comparison.

Incidentally, as pointed out in the classical music column in Private Eye recently, Pavarotti quite often used to fail to show up completely for one spurious reason or another.

Thank God I've got your page to read in the morning about this wretched championship and it's draws. Arbiters should force them to play on.
Truth, whole truth and nothing but the truth. Draws don't prove champions, it just proves they turned up.
David Bentley.

Incidentally, I solved the short draw problem in chess a while ago. I'm just waiting for Kirsan to see the light!

Arbiters should force them to play on

And how are you going to do that if they arrange a repetition?

It's the world championship, not a group of naughty schoolchildren. You can't expect people to play as if it were a smultaneous exhibition and nor can you solve problems (in chess or elsewhere) simply by declaring that things you don't like should be banned.

I think you guys are missing the point. Kramnik is somebody (like Petrosian) who won the World Championship because of his ability to draw lots of games and drive his opponents nuts. I know, I was there at Hammersmith and it was dire. When Kasparov was 5-0 down in that never-ending match against Karpov, Botvinnik gave his old pupil a valuable piece of advice: " ... first you must learn to draw". So (with the benefit of hindsight) I can confiedently assert that Kramnik eas never going to win this tournament style WC, but he may well win it back when it's back to matchplay.

"So (with the benefit of hindsight) I can confiedently assert that Kramnik eas never going to win this tournament style WC, but he may well win it back when it's back to matchplay."

Actually, I pretty much agree with that.

David Bentley:-
Arbiters should force them to play on

Justin:-
And how are you going to do that if they arrange a repetition?


A reasonable point Justin - but agreed draws are something different to repetitions.

Arranged repetitions will of course happen some of the time if a no-draw clause is adopted ... but perhaps it's better than nothing.

I should also say, not all short draws are dull of course - e.g. Svidler-Kramnik from Mexico. Still the main point of my article was not against short draws, as such. More it was to express my sadness that Kramnik surrendered his title in such a lame fashion.

Anyhoo, i'm off to play chess now (or possibly agree a quick draw then head to the bar). I'm looking forward to seeing your article tomorrow.