Should Grischuk have got on with it?

“Control of the clock”, as Simon Webb wrote in Chess for Tigers, “is one of the most important and neglected aspects of practical play.”

I was reminded of Webb’s book when I noticed that, in between reports from Mexico 07, ChessBase had published Time Pressure (and other maladies). I haven’t read the article yet. This is partly because, oh the irony, I’m really busy at the moment and haven’t been able to find a spare a moment, but mostly because the only real solution to constantly running short of time is mentioned just a few lines in to the fairly lengthy essay:-

While I’m far too lazy to bother my arse and actually read this piece, Alexander Grischuk may want to have a look. He’s been plagued by time trouble throughout Mexico 07, and particularly so over the past few games.

In round six, playing White against Svidler, Grischuk whipped out 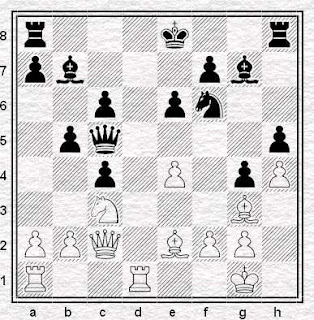 16 … Qc5 is a new move apparently. At this point the Russian thought for getting on for an hour before playing 17. Bd6 – probably the first move that flashed into his head the moment he saw Svidler’s TN appear on the board.

Not surprisingly after this mega long think Grischuk then ran short of time and missed a win while scrambling to make the time control at move 40 (which he achieved with just seconds to go). You can find Speelman's video review of this highly entertaining game here.

On Friday night (round 8) Grischuk was at it again. Black against Leko he played, 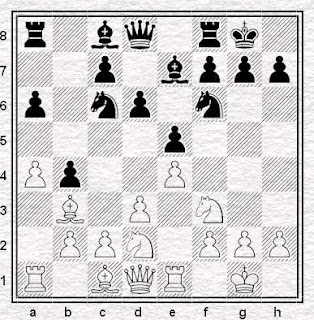 a position well known to theory and, indeed, well known to Grischuk - he’d had it against Anand the round before (losing in 50 moves - see Fedorowicz's video).

Here he thought for over half an hour before deciding to vary from …Na5 with … Be6. Unfortunately for our favourite time trouble addict, it didn’t help him any and he went on to lose against Leko too. De Firmian reviews it here.

At the end of this interview (recorded just after the Svidler game) Grischuk is asked about his time management problem and what he intends to do about it. As you can see for yourself, his response is to ask for advice.

“ … many experienced players, including some grandmasters, seem unable to avoid getting into time trouble game after game. As a result they regularly throw away good positions, and fail to achieve the results of which they are capable … Forget about openings, tactics, strategy, and all the rest of your game. First concentrate on this one aspect of chess, and when you have conquered it your results will improve automatically.”


PS: The videos I've linked to are all from the ICC - who are providing a whole range of free stuff relating to Mexico 07. Their website is well worth a visit.
Posted by Jonathan B at 11:06 am

Obviously some full time chess professionals are regular time-trouble addicts, but in my experience a major cause of time trouble in all players is rustiness and lack of match practice. When you're in that situation you have less confidence in your calculations and judgement and so everything has to get double and triple checked. A weak opening repertoire also has a major impact for obvious reasons. It really isn't very easy to just "play quicker".

And Grischuk is apparently not exactly 100% committed to chess at the moment.

Procrastination and perfectionism, in my case at least, are what leads me into time trouble.

That's very easy to give up - it just takes a decision. Of course that's also very hard to do.

I think it's fair to say that the quest for "perfectionism" is a lot easier to give up, the worse the player you are ;)

And i don't care how easy you say it is - choosing between Rfd1 and Rad1 is an intractable problem that will never be solved. Because once you've plumped for one you always realise immediately you've chosen wrongly :(

He seems to have expended ten minutes tonight without actually playing his first move yet...