I confess that I went to Bury St. Edmunds simply on the strength of its name, which I had often encountered and which had always seemed to me to have a high value for the picture-seeker. I knew that St. Edmund had been an Anglo-Saxon worthy, but my conviction that the little town that bore his name would move me to rapture between trains had nothing definite to rest upon. The event, however, rewarded my faith...

If you are planning to play just one chess tournament this side of Christmas you ought to consider the 27th Bury St Edmunds Congress, which takes place during the weekend of 31 October/1 November at the Corn Exchange. One of the joys of the Bury Congress is its organisation: Bob Jones, the Don Vito Corleone of West Suffolk chess, runs his tournaments as efficiently as could be, pairing, re-pairing and arbitrating freely, thus eliminating that dispiritingly overwhelming sense, so familiar to the competitive chess player, that one is participating in a shambles-come-farce and that there is nothing one can really do about it. Unlike in recent years, the 2009 Congress does not clash with any other UK tournaments, so it can be hoped that the field - which always contains at least four or five titled players - will be especially strong. And if it as any sort of plus point there is likely to be a decent Streatham and Brixton contingent there this year, too.

Then there is Bury St Edmunds itself. The greatest draw for me in any weekend congress is always the location, not least because I don't actually like playing chess, and I'm happy to say that Bury, although these days the very quintessence of a clone town, has more than its fair share of historic points of interest that brighten up the hours between one humiliating defeat at the hands of an eight year old and the next: 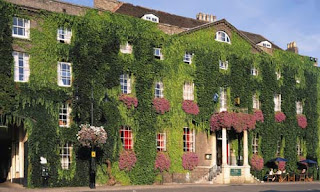 Just round the corner from the Corn Exchange is the Angel Hotel, in which Dickens wrote part of The Pickwick Papers and where, more significantly, Streatham & Brixton's Antony Hall stayed the night before his wedding last year. 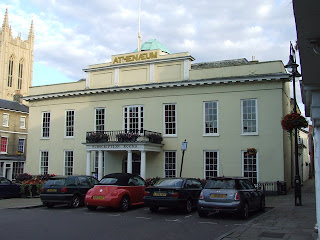 The Athenaeum, home to a Capablanca simul in 1919. 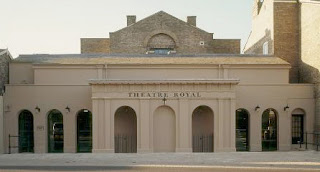 The Theatre Royal, now quite the thing of wonder after a two year project, culminating in September 2007, to restore the building to its original 1819 self. 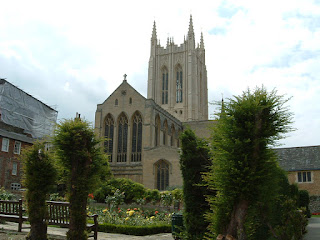 If you do fancy playing Bury this year - it's only an hour and a half from Liverpool Street, after all - then download this year's entry form or contact Bob Jones for more information:

Let us forget for the time being that Henry James is also usually accredited with the remark that 'Life's too short for chess.' 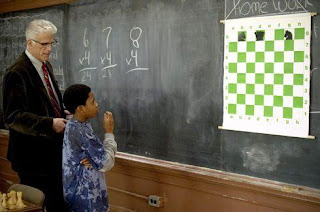 Roland Kensdale has been in touch to say that in the early hours of tomorrow morning (1.10am, to be precise) Channel 4 will be screening Knights of the South Bronx, a TV movie about an inner-city school teacher (Ted Danson) who teaches his students to play chess. If you've got half a bottle of wine left and the valves of your telly are still warm after watching Derren Brown explain how he used a split-screen mix of magic, suggestion, psychology, misdirection and showmanship to predict the lottery numbers, it might be worth tuning in for five minutes, if just to see Sam Malone set unknowing children impossible mate in two puzzles.

I think it is quite funny when you say 'I dont actually like playing Chess'. Why is this? I'm sure you're not the only one.

"Let us forget for the time being that Henry James is also usually accredited with the remark that 'Life's too short for chess.'"

The Oxford Dictionary of Quotations attributes this (rather feeble) quotation to Henry James Byron (1834-84). It is from his comedy in three acts called 'Our Boys' - http://en.wikipedia.org/wiki/Our_Boys

The quote is sometimes misattributed to Lord Byron as well as Henry James.

The tournament is indeed one of the better congresses in the UK and I concur that Bob Jones does an amazing job.
Also worth a mention is the excellent catering that is provided at rock bottom prices.

Thanks for the clarification, John.

The Abbey Gardens is indeed home to the world's first internet bench. When it was first installed some local lads figured out one fairly obvious design flaw -- that you could also just plug in a phone and get free calls. And so they rang Bill Gates to tell him...

I thought the pub had closd down now? I would be pleased to learn that I was mistaken, not that that would do me much good several hundred miles away.

I may have mentioned this before but years ago, when I used to go to Oxford City chess club on a Monday night, a workmate asked me on a Tuesday morning if I had enjoyed myself the night before. "Oh", I said, "I never enjoy myself playing chess". "Well why then", she asked, "do you do it?" That was close to two decades ago and I am still not sure that I can provide a satisfactory answer.

The Nutshell was definitely still open the last time I was in Bury (about two months ago).

In the first shot of a board from the national schools' final in KotSB,about 15 mins from the end of the movie, the white king and queen appear to be the wrong way round.The final victory also seems to be achieved by black playing Re7 or Rd7 checkmate in response to a check along the seventh rank.

There were loads of inaccuracies in the film chesswise but then there are in virtually every chess film, or bit with chess in it. Given they showed an awful lot of chess I thought the level of mistakes was quite low. It was certainly a lot more accurate that the film Knight Moves (Searching for Bobby Fischer). Thanks for pointing out the film was on. I had never even heard of it before.
Andrew