Today I want to take you back to the Coulsdon u-130 from the year 2000. I admit it's not a tournament generally regarded as matching Hastings 1895 or Zurich 1953 in terms of its historical importance but still I'm rather fond of it. It's the one exception, you see, to my quarter century or so of winning precisely bugger all at the chess board. 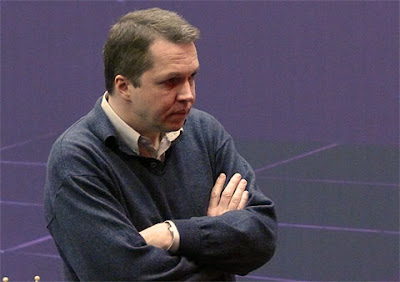 Nigel Short captured just after being reminded that
while he may once again be Britain's No. 1, he's never won a grading limited event at Coulsdon.

Then, as now, I was rather in the habit of acquiring good positions before mucking them up. That weekend at Couldson, though, things went the other way and I managed to arrive at the last round a point clear of the field on 4/4 despite being easily lost/lost/probably lost/absolutely lost-there's-no-way-I'm-getting-out-of-this* in rounds one to four respectively.

In the last round my opponent played the French Defence and of course I headed straight for a TIFE. I would perhaps have been rather worried about the game ending up like Gurevich-Short, Manila 1990 were it not for the fact that my young opponent had clearly not been born when that game was played. Indeed, I rather doubted she'd arrived on the planet in time for the Kasparov - Short, Championship match in 1993!

I offered a draw around about the time we castled but to her credit my opponent demonstrated considerably more fighting spirit than your cowardly blogger and turned me down. Unfortunately for her she immediately went wrong and the game didn't last much longer. Showing a fine sense of timing she offered me the draw back and it didn't take me too long to accept.

I could see I was now winning - e.g. 19. Ne5+ Kc7, 20. Ng6 Rf7, 21. Rxe6 - but I quite fancied spending the afternoon in the pub so I shook her hand and headed out of the tournament hall to find the nearest place to buy a drink. In fact White can win rather more than a pawn in the final position. Would I have played on had I realised that at the time? I rather doubt it. I like to think it would be different now but back then I imagine that I would have wanted to avoid my own low-rent version of Bill Hartston's story at any price. White to move
Play on or head for a celebratory pint?

I've rather rested on my laurel ever since I took that draw and haven't played any tournaments - save for the Kings Head Rapidplay last year - for quite a while.

The reason for mentioning all this now? Well thanks to Angus French's encouragement, and indeed his driving, I'm coming out of retirement and will be playing in Paignton next week. I'm hoping this revisiting of what pass for my chess glories will bring me good luck. We'll see how it goes.


* A piece down for a long time in this game, I managed to win only after my opponent (then very young but subsequently reaching 2100+ elo) put a rook on g4 then failed to move it after I played h2-h3.
Posted by Jonathan B at 8:59 am

Is Nosher about to do the weather forecast in that picture?