The Next Next-Gen Chess?

Is Arimaa next generation chess? asked blogger Rocky Rook on Friday, going on to ask if his readers had encountered the seven-year-old game before. (And if not Arimaa, then what?)
The answer is surely that no, Arimaa is not the new chess. Designing a game to be more or less computer-proof -as Arimaa seemingly is- does not imply that it will overtake the popularity of chess. Sub-aqua sumo wrestling is computer-proof, but certainly no rival to chess - although I believe Nigel Short is a fan. And to answer Rocky's other questions, then yes: I remember playing Arimaa several years ago, and I didn't feel anything like the hook that plunged into me for life the first time I picked up a chess piece.
So what is next generation chess? Had I been a betting man, then a few years ago I'd have placed a wager on Kung Fu Chess. Kung Fu Chess? I hear you ask. Never seen that on ICC. What's that? 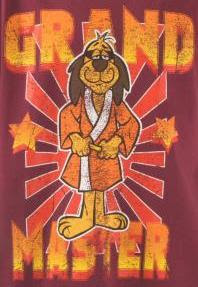 Hong Kong Phooey, Kung Fu Grandmaster:
unrelated to the topic of today's post
Well, Kung Fu Chess is exactly the same as chess except for two things; one minor, one major. The minor one first. You don't checkmate the king - you take it, and whoever takes the opponent's king first wins. Now for the major difference, the one that defines Kung Fu Chess. You can move all the time. That is, players don't take turns - they can instead at any point in the game move any piece. Thus your first play could, literally, be to move all your pawns to the fourth rank, your knights to f3 and c3, bishops to d3 and e3, Qc2, castle long, and Rhe1, as fast as your mouse can flick. I should mention one important detail: the pieces have a recovery time the players agree in advance, during which they cannot be moved again. For example, once your knight has reached f3, it may, say, be a second before it can go to e5. This is indicated by the yellow timer on each square: 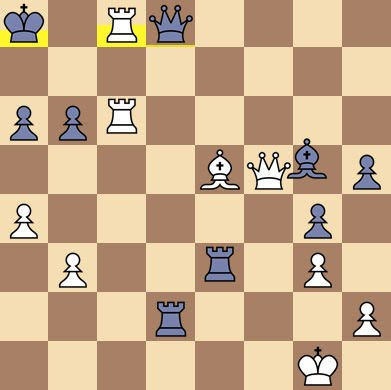 Thus in this diagram, the queen on d8 will be able to move again before the rook on c8, which is probably bad news for white. Oh, and in this diagram several pieces are still in motion, such as the bishop not quite on g5. The time it takes each piece to travel is also agreed before the game.
So why would I have bet on Kung Fu Chess to be the Next Big Thing? Well, the game play of Kung-Fu Chess is extremely exciting, simple to understand, and difficult to do well - at least, I hope it's difficult, because I'm very bad at it. The game is unique to the internet, and thus there are no issues of purity and properness as there are with playing chess-actual online. It is entertaining to spectate and very quick to play; I would expect non-players to enjoy watching it a lot more than non-players seem to enjoy watching real chess.
Fortunately, I'm not a betting man. The game seems never to have caught on, and the original website (http://www.kungfuchess.com/) now contains nothing but a one-line advert for MTV. It has to be said there were always problems with the original website. One was the annoying theme music that never stopped playing. And, unsociably, it only worked in internet explorer. I have a distant memory of some kind of malware problem too, although wikipedia says otherwise.
Nonetheless, Kung Fu Chess is being kept alive at Tempest, a link worth clicking at least to see a video example of how the game goes. I have gone through the effort of downloading their interface - and a considerable effort it was, since I had to first download something or other from Microsoft first. Anyway, the Tempest interface is nice enough looking and easy to use. However, there seems to be very few players online at any one time - and unfortunately of those that are, a loud minority seem to be only there to mock and abuse. Here's a picture of the interface: 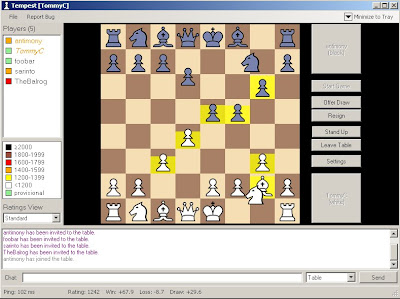 Tempted by Tempest? It'd be nice if the game did catch on, but that will probably only happen if it's incorporated into the ICC or the playchess server. In the meantime, there's only one game that's the new chess, the next gen chess, the next next-gen chess. And that game is - chess.
Posted by Tom Chivers at 9:13 am

I loved the response! I think you, for one, understand that there never will be a next-gen chess. Someone will always be inventing variants, tweaks and games that use chess pieces but are not really that similiar to chess.

I really think you summed it up best when you said this Arimaa game, "didn't feel anything like the hook that plunged into me for life the first time I picked up a chess piece."

The fact that there are so many variants to chess attests to it's pull and popularity. None of the variants and spin-offs of chess, however, will ever supplant it. But it is alway fun to document yet another attempt.

A previous reference to kung fu chess on the S&BC blog can be found here.


As for variants ... I think they're all shit (compared to chess or otherwise).

Another fan of Kung Fu Chess!