Definitely Got Something to do with Chess 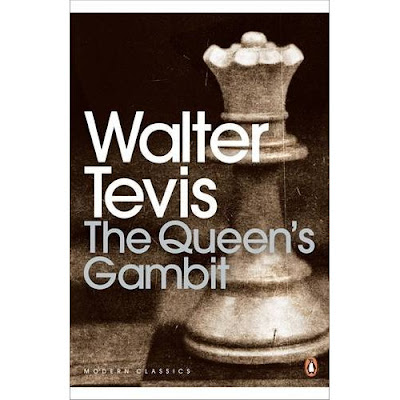 Beth Harmon becomes an orphan when her parents are killed in an automobile accident. At eight years old, she is placed in an orphanage in Mount Sterling, Kentucky, where the children are given a tranquilliser twice a day. Plain and shy, she learns to play chess from the janitor in the basement and discovers that she is a chess genius. She is adopted by Alma and Allston Wheatley and goes to a local school, but remains an outsider. Desperate to study chess and having no money, she steals a chess magazine from a newspaper store and then some money from Alma Wheatley and a girl at school, so that she can enter a tournament. She also steals some of the tranquillisers to which she is becoming addicted. At thirteen she wins the tournament, and by sixteen she is competing in the US Open Championship. Like Fast Eddie (in The Hustler), she hates to lose.

He also wrote The Man Who Fell To Earth.